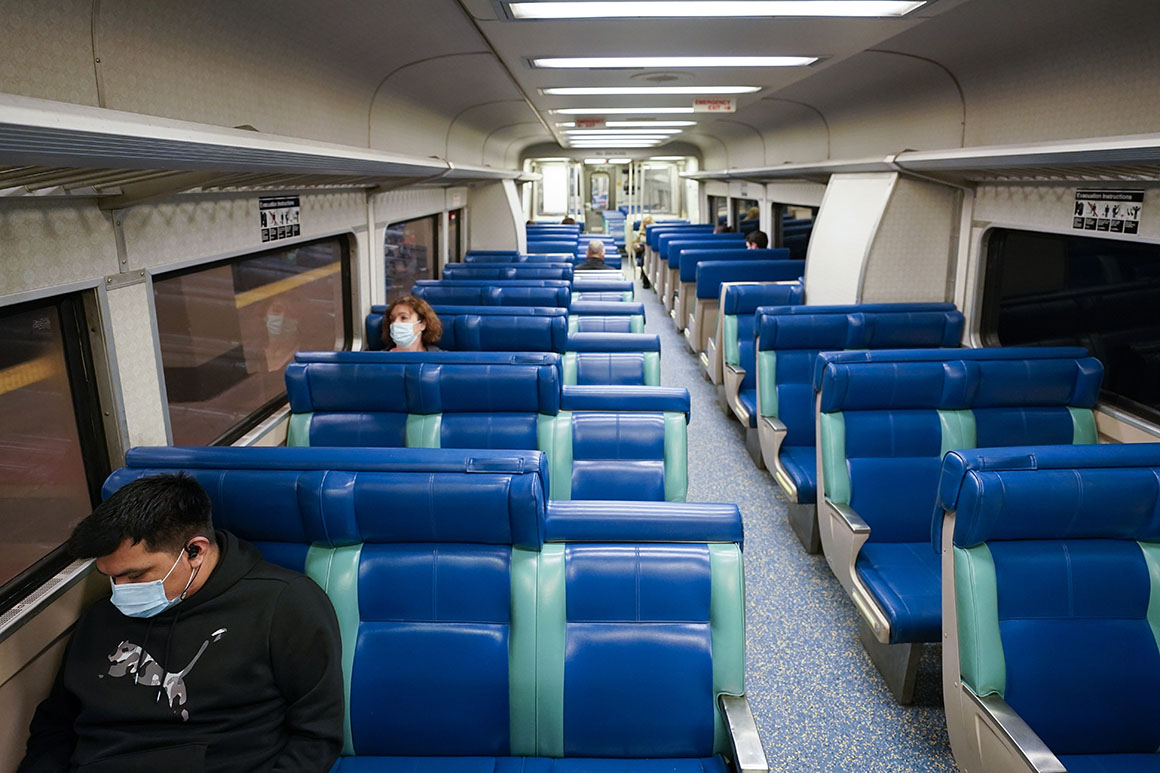 NEW YORK — Nick Potter leans against the marble ticketing booth in the sparsely populated Grand Central Terminal, scrolling aimlessly on his phone as he awaits his more than two-hour commute back to his home in Connecticut.

Potter, a lawyer who used to live on the Upper East Side of Manhattan, is one of many New Yorkers who fled the five boroughs for more space at the height of the Covid-19 pandemic. Now he, like so many others, is wrestling with what a return to work will look like as the public health crisis abates.

Potter said a long trip to the office from his new abode in Salisbury, Conn. — a car drive and then a train ride — may be his new normal going forward. It just won’t happen every day. Many days, he says, he’ll continue to do his job from home.

“This is all Covid,” Potter, 58, says of his new “journey” to work. “Since the summer of 1987, I’d basically put on a suit and walk or take a bus or bike into midtown [Manhattan]. Now, all of a sudden, I have this sense that, ‘Oh my god, there’s a different way to live and work.’”

Potter’s embrace of new, sporadic commuting habits portends a major struggle for mass transit agencies as vaccinations bring the coronavirus under control in the United States. City dwellers around the country have spent the last year flocking to the suburbs, driving up single-family home prices. But commuter rail lines, built generations ago to support the suburban sprawl that followed the 1950s and 1960s, are still facing an uncertain future — with both new and old customers expected to commute just a few days per week as they embrace “hybrid” work.

The pandemic-fueled shift to remote work, which experts say is unlikely to ever fully reverse course, is creating new financial and logistical challenges for transit systems that were built around a daily, 9-to-5 commuting structure. Commuter rail lines — which are primarily used by white-collar office workers — stand to suffer the most from the shift.

New York’s Metropolitan Transportation Authority, which runs city subways, buses and the commuter rail lines, says it doesn’t expect rail ridership to ever fully return and is already looking at changing its service to adapt to new commuting patterns. In Austin, Texas, transit officials are planning major rail projects around recreational activities, instead of the traditional office commute. And in Washington, D.C., Metro officials are discussing changing fare structures now that few commuters are interested in a monthly pass.

“The pandemic was extraordinarily destructive from a financial point of view, operating point of view and, frankly, from a human point of view,” Pat Foye, the chair and CEO of New York’s MTA, said at a recent forum where he and other experts discussed the changing landscape for transit agencies.

The Covid-19 pandemic devastated farebox revenue for every major public transit operator, including buses and subways systems. But commuter rail was hit the hardest and has similarly seen the slowest recovery, since most of its riders work the kind of office jobs that are most adaptable to remote work.

“The hybrid work model is going to be almost universal,” said Kathy Wylde, president and CEO of the Partnership for New York City, a prominent business consortium. “Overall, employers are accepting the desire for more flexibility. … It’s a very competitive job market and employers want the best talent, even if they’re only in the office three days a week.”

Finance giants like Deutsche Bank, Citigroup and JPMorgan Chase have all said they will embrace a hybrid work model, at least for a portion of their employees. More than 70 percent of New York employers said they plan to allow some remote work, according to a recent survey by the Partnership for New York City.

Ridership patterns already indicate these shifts have taken place. Ridership on the MTA’s two commuter rail lines — Metro-North Railroad, which runs through the Hudson Valley and Connecticut, and the Long Island Rail Road — dropped 97 percent at the height of the pandemic and is still down as much as 70 percent on weekdays.

While subway ridership in New York fell to similar lows, it has seen a faster uptick and is now down roughly 60 percent. And buses, which primarily serve essential workers who must commute, have recorded 50 percent of its usual ridership for most of the pandemic. MTA leaders have warned that ridership may not rebound until 2023 — and even then may never hit 2019 levels again.

Depressed rail ridership creates a “paradox” for transit officials, who must contend with subsidizing a system that people may use less but still rely on for service, said Mohamed Mezghani, secretary general of the International Association of Public Transport.

“I would not say it will reach the levels we knew in the past, but we cannot say that people will stop using it,” he said. “They will certainly use it less because working from home will stay — not full time, but part time.”

Transit agencies managed to stave off draconian service cuts after receiving billions in aid from federal stimulus packages. But new revenue streams may be necessary to help bolster rail in the long-term.

Globally the Covid pandemic is on track to be worse this year than in 2020 — and world health leaders are calling on wealthy nations to step up their game. Plus, more on tax hikes and sanctions on Belarus.

The conundrum could rejuvenate the debate about creating dedicated subsidy streams for commuter rail lines, some of which were already struggling to balance their books. That could mean things like value capture, where developers who build near transit systems have to contribute annual taxes toward their upkeep. Transit officials in cities like New York also see vast potential for congestion pricing — which charges drivers a European-style toll to drive into busy downtowns — to help fund their systems.

Other experts said the federal government may need to start taking a more proactive role in contributing to the operating budgets of public transit agencies, instead of just funding big construction projects. The stimulus packages encouraged that conversation by contributing to transit agencies’ bottom line when fare revenue had all but evaporated during the pandemic.

“The Covid funding that was offered in this first [federal package] really shifted the discussion in ways advocates have been pushing for,” said Stephanie Gidigbi Jenkins, the former director of strategic initiatives at the federal Department of Transportation under the Obama administration. “It makes no sense to build out a system and not pay for the people who will actually make sure you get to where you need to.”

Many see greater potential for that shift under President Joe Biden, who was a frequent user of Amtrak’s regional rail in the Northeast before taking office. Biden’s massive infrastructure package, which is now being negotiated with Congress, calls for $85 billion to support public transit agencies and $80 billion for Amtrak. State lawmakers in New York are pushing Congress to permanently cover some of the MTA’s operating costs.

The pandemic has also forced transit agencies to rethink the services they provide to better accommodate 21st-century riding patterns. An expansion of rush hour service to go beyond the early morning and evening commute may be necessary to capture new flexibilities in work schedules, said Gidigbi Jenkins, who also sits on the board of the Washington Metropolitan Area Transit Authority. WMATA board members are also wrestling with changing fare structures as fewer people buy monthly passes.

“It’s going to force a different conversation on the service levels,” Gidigbi Jenkins said. “Covid brought to light the things we turned a blind eye to in many ways. We have not rightsized the service hours with the real use of the system.”

Those conversations are also occurring in New York, where 35 percent of the Long Island Rail Road’s ridership used to occur during the morning and evening rush. Rush hour now starts much earlier because of essential workers’ schedules, with 7 a.m. and 3 p.m. becoming the new peak times.

“That [shift] is helping us spread out ridership across the 24-hour day, and maybe that changes our need for rolling stock and the size of trains and how we support the ridership of the future,” said Phil Eng, president and CEO of the LIRR.

“As businesses rethink where their main hubs will be and consider staying in Manhattan or not, we will be looking to serve that reverse commute and to serve anyone who needs to travel inter-island,” he said.

Some transit agencies are also putting greater stock in how people use the system outside of work.

Before the pandemic, New York was contending with a steady growth in commuter ridership. But in recent weeks, weekend ridership has surpassed weekday ridership — highlighting an eagerness to use commuter rail for baseball games or dinner, Eng said.

“The days of the Long Island Rail Road rider being just five days a week — get on the train in the morning to go to Manhattan and at the end of day go home — it has shifted,” he said

In Austin, Texas, transit officials are looking to capitalize on that trend.

Officials wanted the plan to create a regional rail system that didn’t just cater to commuting in and out to work, said Randy Clarke, CEO of Capital Metro.

“If we’re not looking beyond the traditional commuter experience then I would argue we’re not looking to the future,” he said. “The future is flexible. The world is only going to become more digitized and faster.”

Voters in November passed a referendum to raise taxes to fund the bulk of the expansion plan, called Project Connect. Previous attempts in 2000 and 2014 to pass much smaller rail referendums failed when they came up for a vote.

The new, post-pandemic equation, he said, is: “If you’re going to have expensive infrastructure, how do you get more utility out of that infrastructure?”