The White House is weighing a number of gun safety proposals as it looks to deliver on President Joe Biden’s campaign promises. But some activists are upset that after one month in office the administration has yet to set a firm timeline or provide specifics about its overarching plan.

Among the executive actions under consideration by the administration is one that would require buyers of so-called ghost guns — homemade or makeshift firearms that lack serial numbers — to undergo background checks, according to three people who have spoken to the White House about their plans.

Sen. Richard Blumenthal (D-Conn.), who spoke to the White House in the last week, said he recommended the administration take executive actions to close the so-called Charleston loophole that allows a gun to be transferred from licensed gun dealers before a completed background check. But Biden aides were reluctant, Blumenthal said.

Instead, the White House is likely to stick with campaign promises to support legislation to close the Charleston loophole, as well as measures designed to keep guns away from people believed to be a danger to themselves or others and to establish safety storage standards for firearms, according to one of the people familiar with the plans.

“My view is the bigger and bolder the better on gun violence prevention because we have a unique window of opportunity,” Blumenthal said.

The desire to go bigger and bolder is running up against a variety of different political realities, however, among them a Senate that’s split down the middle and advocates who are at odds over which policies to push and how quickly to push them. Underlining it all is a promise that Biden made to act quickly on guns after taking office — a promise that looks less likely as the Covid-19 pandemic overshadows everything else.

The White House has held several meetings on gun violence with prominent groups pushing for gun restrictions, community-based groups asking for billions of dollars in program funding and survivors of gun violence.

The meetings are being led by Susan Rice, director of the Domestic Policy Council, and Cedric Richmond, director of the Office of Public Engagement. During recent meetings, Richmond shared with advocates that he lost a childhood friend to gun violence, according to three people who were in conversations with the former congressman. 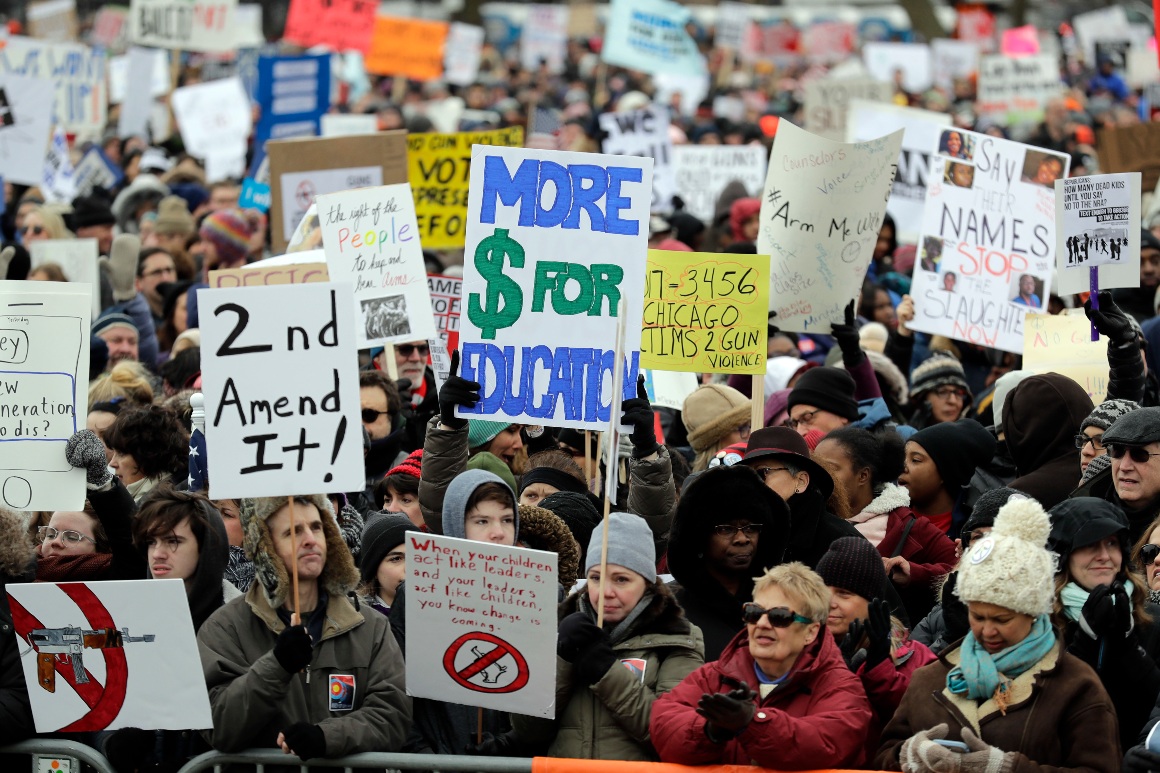 Demonstrators attend a March for Our Lives rally in support of gun control in Chicago. | Nam Y. Huh/AP Photo

A White House official said that Biden is considering “every tool at our disposal, including executive actions” and is looking at investing in community violence programs, requiring background checks, banning assault weapons and high-capacity magazines and repealing gun manufacturers’ immunity from liability. But Biden still lacks a Senate-confirmed attorney general and director of the Bureau of Alcohol, Tobacco, Firearms and Explosives, who will play a key role in any executive branch action on guns.

“During the campaign, the president laid out an ambitious plan to keep our communities safe, and he remains committed to that agenda,” White House spokesperson Mike Gwin said.

The discussions come as gun sales have skyrocketed amid a year of pandemic quarantines, a summer of racial unrest and Biden’s victory in the presidential election, after promising an aggressive push to reduce gun violence. The year 2020 saw a record number of gun homicides in the United States.

The outreach from the Biden White House to gun safety groups has been lauded by the more established organizations. “This administration is what, three weeks old [but] it’s the strongest gun safety administration in history, whether you’re talking about the president or the vice president or the Cabinet,” said John Feinblatt, president of Everytown for Gun Safety. “We’ve got full confidence they’re going to govern like it.”

Advocates affiliated with those groups argue the chance for action in Congress and elsewhere in the federal government has never been better, in part because public support for changes have steadily increased after Newtown, Conn., and subsequent shootings and in part because of the implosion of the once-mighty National Rifle Association.

“We have changed state legislatures. We have passed voter referendums. We have seen for the first time in my time in this movement a… Democratic primary where every single candidate was trying to outdo themselves on how much they care about this issue,” said Christian Hayne, vice president of policy for Brady, a group which supports increased firearms restrictions. “We do anticipate the momentum will continue to build until we get the change that we desperately need.”

Biden has a lengthy history of dealing with gun legislation, though his most recent effort ended in notable failure. After Newtown, Conn., Obama asked him to push through what he had hoped would be the biggest firearms restrictions in decades. But after months of meetings and limited executive actions, a bill to require expanded background checks died on the Senate floor.

The Senate is even less Democratic now, split 50-50, meaning that any bill would require at least 10 Republicans to vote with all Democrats. And, as such, grassroots groups led by young people of color who’ve survived mass shootings or live in communities battling daily gun violence want Biden to use his executive power immediately to close loopholes for gun sellers.

Some of them are urging the administration to begin disbursing money to 40 cities across the country plagued by gun violence through discretionary agency grants or by declaring a national emergency. Rather than wait for Congress to pass funding in an infrastructure or gun control bill, groups like March For Our Lives and Community Justice Action Fund say agencies can and should start allocating funds to community-based programs now. They fear that the administration’s current approach could take weeks, even months to result in progress, and note that such lengthy timelines are at odds with Biden’s vow to act on his first day in office.

“We have incidents where there’s three or four people getting shot [daily] and we don’t get the same kind of uproar and attention for those kinds of homicides and mainly because they’re Black and brown people,” said Eddie Bocanegra, senior director of the progressive Heartland Alliance’s READI Chicago chapter, who has spoken to the White House. 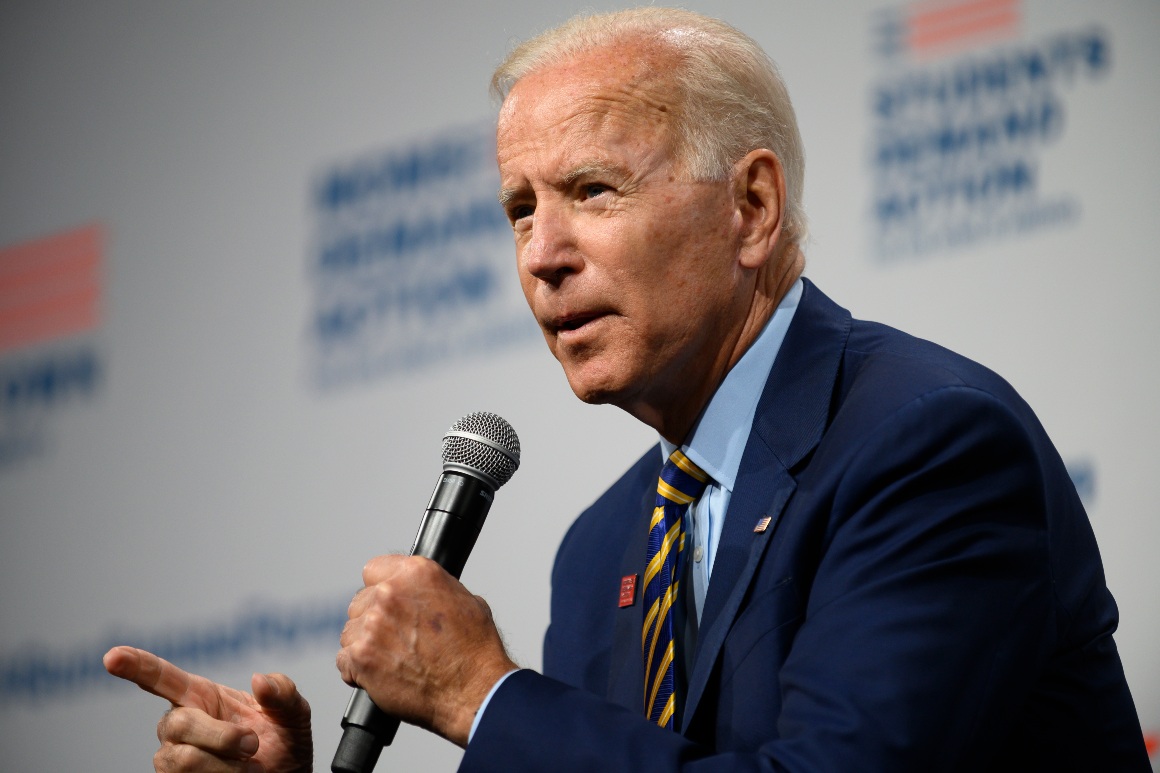 Earlier this month, Heartland was among the coalition of organizations representing communities of color which sent a letter to the Biden administration expressing disappointment that they were not included in a gathering the White House held with more establishment gun control groups. According to four people who were involved in recent meetings, the White House moved quickly to rectify the situation and has since held at least two virtual calls with advocates from groups across the country.

Bocanegra said he was happy with the audience he received at the White House. But he still expressed frustration that white-led gun control groups appeared to be getting more attention after he had spent days helping the Biden transition on policy.

“I want to see my return on that investment,” he said.

Complicating any effort to move gun safety measures — whether through legislation or executive action — is the Covid pandemic. At the moment, nearly 2,000 Americans, on average, are dying each day from the virus. And while the country’s cases and deaths have declined from their January peak, the White House’s top priority remains reining in the coronavirus pandemic and distributing economic relief, including a nearly $2 trillion Covid-19 bill moving through Congress.

While the White House focuses its efforts on the pandemic, lawmakers working on gun control have been left waiting for signals. Sen. Chris Murphy (D-Conn.) said he plans to reintroduce his universal background check bill in the coming month, though he wants to see a plan from the Biden administration first.

“I don’t think anybody’s going to move forward on strategy without hearing from the White House,” said Murphy, who plans to speak to Rice this week.

Murphy himself has said he supports Biden using his executive authority to tackle gun control. But if Democrats are going to pursue legislation, “our best chance to pass a background checks proposal is this year. I don’t want to have to wait for a mass shooting.”