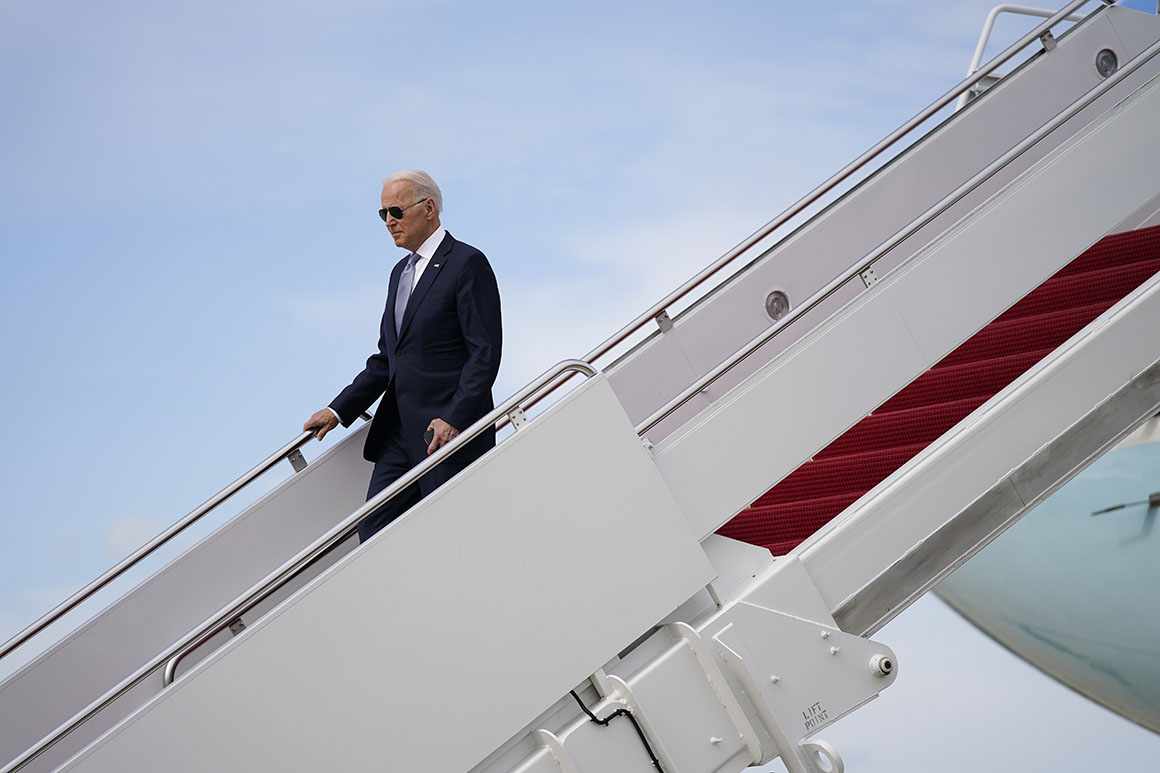 As President Joe Biden scrambles to convince hesitant Americans to get the Covid-19 vaccine, his White House has largely steered clear of Fox News, the major cable news outlet whose opinion hosts and guests have been spreading unsubstantiated fears about vaccinations.

The White House has so far taken an arms-length approach to Fox, despite its strong following among supporters of former President Donald Trump, who watch the network more regularly than any other cable outlet, and are less likely to be vaccinated than the average American. Administration officials have appeared only sparingly on the network to discuss the necessity of the vaccine and counter persistent doubts about its efficacy being voiced there. And off of Fox’s airwaves, they have been reluctant to call out the network.

That’s a contrast with the administration’s approach to social media platforms where vaccine misinformation has spread. Last week, Biden accused Facebook of “killing” people for not doing more to remove such misinformation—an accusation he later toned down.

White House officials said they recognize the need to reach Fox’s audience and insist that they are making efforts to do so. All told, members of Biden’s Covid-19 team have made roughly a dozen appearances on Fox since late January, albeit on a select few shows. Four appearances have been on “Fox News Sunday with Chris Wallace;” three with the daytime anchor Neil Cavuto and the others on “America’s Newsroom” and newscasts hosted by Bret Baier and Martha MacCallum.

White House spokesperson Kevin Munoz said the administration doesn’t “shy away from calling out” misinformation and pushing media platforms “to provide the right information to their viewers on public health issues.” Every outlet, including Fox, he added, needed “to step up and ensure their coverage provides accurate, objective information around COVID-19 and the vaccines.”

But Biden’s aides argue that aggressively attacking Fox for helping to push vaccine conspiracies would be a counterproductive way of reaching its audience. Instead, they have tried to engage more broadly with the network on their coverage of vaccine confidence. Their efforts have included a private briefing earlier this year between Fox producers and senior White House officials to discuss accurate, informed coverage about taking Covid-19 vaccines, according to a person familiar with the meeting.

“We’ve been in touch with every network and many, many media outlets about coverage of Covid-19 to make sure people have accurate information, to voice concerns when we have them,” White House press secretary Jen Psaki told reporters Tuesday.

White House aides said they are heartened by signs that some daytime Fox hosts and others in conservative media are taking vaccines more seriously. On Monday night, Neera Tanden, a senior White House adviser, took the unusual step of encouraging her followers to retweet a clip of Sean Hannity embracing vaccines on his program.

But Democrats outside of the administration say Biden’s team should go much further. They want them to place officials on Fox more frequently, particularly in the evening hours where disinformation and even fear-mongering around the vaccines has been most rampant.

“The nighttime shows present challenges,” said Lis Smith, a Democratic strategist who popularized a go-anywhere approach while helping helm Pete Buttigieg’s 2020 Democratic presidential campaign. “But what’s the goal here? We’re not trying to win a political argument. Our goal here is to give people critical public health information and facts and save lives. And if the only shows they tune into are Tucker [Carlson], Laura [Ingraham] and [Sean] Hannity, then just go to where they are and make the case.”

Though the pandemic has made the stakes much higher, Democrats have long been vexxed about the degree to which they should engage Fox News. In the fall of 2009, the Obama White House went to war with the network amid rising frustration with the conspiratorial chalkboard musings of then-host Glenn Beck. They excluded Chris Wallace from a round of presidential Sunday show interviews and blacklisted Fox from a Treasury Department background briefing.

“We’re going to treat them the way we would treat an opponent,” said Obama’s communications director Anita Dunn, who now serves in a senior adviser role for Biden. “[W]e don’t need to pretend that this is the way that legitimate news organizations behave.”

Eventually, the White House backed down after Fox News’ competitors rallied to its side. But the animus lingered throughout Obama’s time in office, and it remains to this day. Bill Burton, who was the deputy press secretary at the time of the Obama-Fox fracas, said he believes Fox is “worse now than it was then.” He suggested that the FCC “look at them” as a “danger to the country.”

A Fox News executive said the FCC has no authority over cable channels, calling the suggestion “grossly ignorant and misinformed.”

Few Democrats say they believe the solution to Fox comes in the form of government regulators. But they aren’t pollyannaish about engaging constructively with the network, either.

Democrats’ anger toward Fox’s Covid coverage has increased of late, as the Delta variant has spread across the country and as the administration’s own data shows that the unvaccinated make up 99.5 percent of recent Covid-19 deaths. The liberal watchdog Media Matters analyzed two weeks of programming on the network and concluded that hosts and guests “repeatedly fear-mongered about and downplayed the need for continued vaccination campaigns.” In all, the report found that a majority of its segments about vaccinations, 60 percent, featured voices that undermined confidence in the shots.

In response, a Fox News representative pointed to recent examples of several on-air personalities on the news and opinion side promoting the vaccine, the network’s vaccine-focused PSA and the channel’s vaccine finder tool, which helps people find vaccination locations closest to them.

But in recent days, “Fox & Friends” co-host Brian Kilmeade falsely said that the vaccine isn’t nearly as effective against the Delta variant “as they say,” breaking with his morning colleague, Steve Doocy, who noted that the vaccine has proven extremely helpful in keeping those infected with the variant alive and out of the hospital.

Carlson, Ingraham and their guests have gone further, offering misleading warnings about possible downsides, even dangers, of getting vaccinated and of government overreach in trying to find unvaccinated Americans to encourage them to get the shot. Carlson has repeatedly accused the Biden administration of not telling the truth, most recently when he pushed back on CDC Director Rochelle Walensky for saying the vast majority of new cases arose with unvaccinated people, a statement backed up by government data. And while Hannity made positive remarks about vaccinations on Monday night, they were also sandwiched between segments casting doubt on the vaccine.

Matt Bennett, a top official at the centrist Democratic group Third Way and regular Fox News guest, said he saw no upside in the White House calling out the network for pushing vaccine disinformation. “Facebook might respond to pressure from the White House with constructive action,” he said. “Fox is likely to do the opposite.”

And though he is comfortable engaging with Fox’s dayside hosts, he predicted it would backfire if the White House were to put officials — even health experts from the Covid task force — on the evening programs.

“The problem with people like Hannity, and this is true for the whole primetime lineup, is they don’t let you talk, they shout you down, they get the last word by offering a blizzard of bullshit,” Bennett said.

For those Trump veterans who do believe in the efficacy of the Covid vaccine, the White House’s approach to conservative platforms has been far too rigid, and not just when it comes to Fox News. Sean Spicer, Trump’s former press secretary turned Newsmax host, said he has tried repeatedly to book Anthony Fauci— the president’s top Covid adviser — on his program, only to be rebuffed. He has had former Democratic Rep. Barney Frank on instead.

“They don’t talk to Republicans or conservatives. It is obvious to anyone paying attention,” Grogan added. “What is the harm? You have to try.”

But the relationship also works both ways, Democrats and health professionals note. Oftentimes, conservative outlets that rail against the administration and question the efficacy of the vaccines don’t bother reaching out to the White House for guests to book. And when guests do go on the shows to promote vaccination, the experience can often prove miserable.

“People just were very angry with me,” recalled Dena Grayson, a physician who used to appear regularly on Fox going back to the earliest days of the pandemic. She recalled how she would get Google translated voice messages on her Google Voice number. “So I see the thing, you are a ‘effing country.’ I thought well this is a weird [one], this will be interesting. Let’s do it. It wasn’t ‘country.’ It was just minus the ‘ry.’”

Grayson said she would get death threats following appearances. Still, she’s willing to engage with Fox, if asked, and thinks it’s worth the president’s time and effort to do so, as well.

“Anything and everything that the Biden administration can do to get Fox to, at a minimum, speak less lies and at least try to spread more accurate information — that is valuable,” she said.