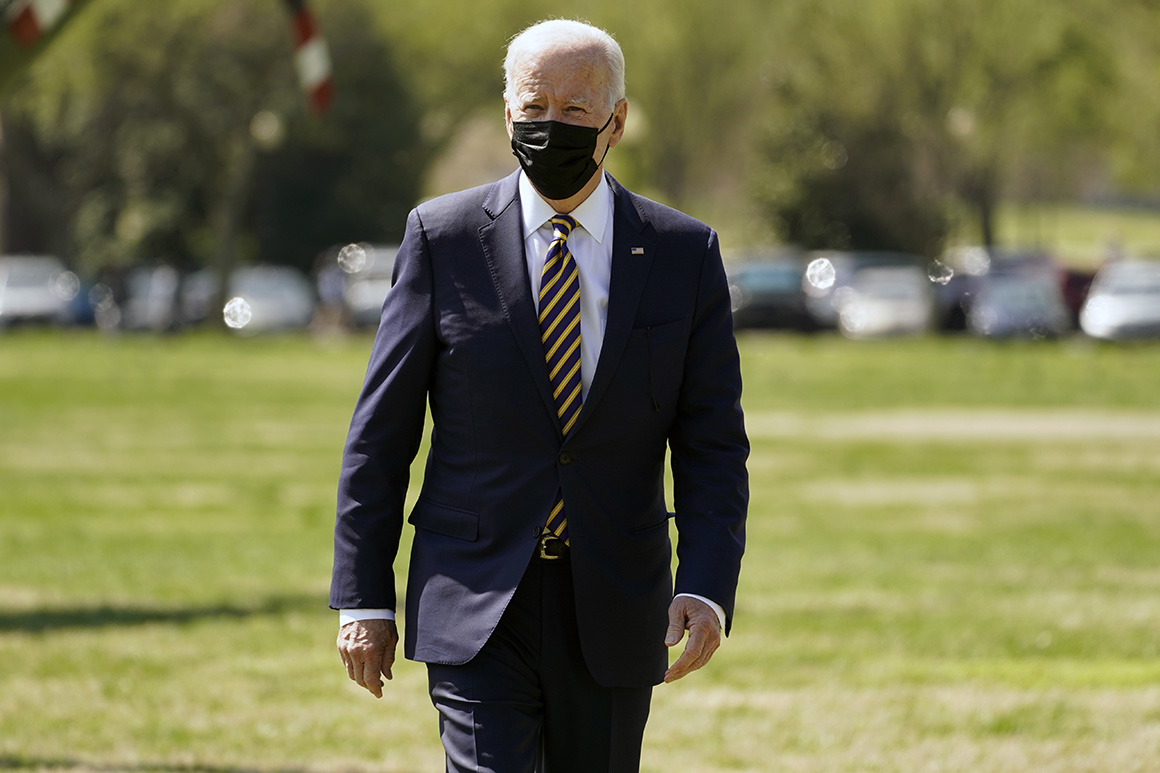 President Joe Biden will unveil a package of executive actions to curb gun violence on Thursday — a step that is likely to be cheered by increasingly impatient advocates despite being relatively modest in scope.

The announcement will come nearly three months into Biden’s term, a delay that had frustrated activists who wanted the president to fulfill a campaign pledge to take action on gun violence on his first day in office. That frustration only grew after a slate of mass shootings in Colorado, Georgia and California.

Among the actions Biden will take will be to direct the Department of Justice to begin, within 30 days, the process of requiring buyers of so-called ghost guns — homemade or makeshift firearms that lack serial numbers — to undergo background checks and, within 60 days, regulating concealed assault-style firearms, according to the White House.

More than 100 House Democrats wrote to Biden last week, urging him to take action on the concealed assault-style firearms, which is similar to the one used in the Colorado shooting in which 10 people were killed.

Biden will also direct the Department of Justice to provide states within 60 days with proposed red flag legislation that would permit courts to order the temporary removal of firearms from a person who may be a danger to themselves or others and issue a comprehensive report on firearms trafficking, according to the White House. The last report was completed in 2000. In addition, Biden will direct five federal agencies to redirect money to help prevent community violence. The Department of Health and Human Services will also help teach states how they can use Medicaid money for gun violence prevention.

POLITICO first reported early Wednesday that the executive actions would be released based on four people familiar with the plans. The White House confirmed the reporting Wednesday evening.

On Thursday, Biden will announce David Chipman, a longtime former ATF agent, to be his nominee to be the director of the Bureau of Alcohol, Tobacco, Firearms and Explosives. The agency will play a key role in any executive branch action on guns, according to the White House. Chipman, who is a senior policy advisor at Giffords, a group advocating for firearms restrictions, did not respond to messages.

Biden’s nominee could be tough to get through a Senate split 50-50 between Republicans and Democrats. The ATF has had mostly acting directors since the position became Senate-confirmed. Todd Jones was confirmed as ATF director in 2013 after a years-long stint as acting director.

“David has not only served on the front-lines in the fight against gun violence, he knows the policies of prevention backwards and forwards,” said Sen. Richard Blumenthal (D-Conn.), a member of the Senate Judiciary Committee. “ATF needs permanent leadership, having had only one Senate-confirmed director since 2006.”

Biden is expected to be joined at the White House Thursday by Attorney General Merrick Garland, members of Congress, groups pushing for firearms restrictions, community organizations and gun violence survivors, according to those familiar with the plans. Several people planning to attend said in interviews that they had not been briefed on what actions Biden would release.

The National Shooting Sports Foundation, the trade association for the firearms industry, said it will “carefully review” Biden’s actions. “Where those orders exceed his lawful authority and usurp the power of Congress to make law, NSSF will take all appropriate steps to protect the interests of our industry and the Second Amendment rights of our customers,” it said.

Opposition for Biden has not only come from gun rights advocates but from groups advocating for gun restrictions, too. A recent poll found that 57 percent of Americans disapproved of the way Biden has handled gun violence as president with opposition from both Republicans and Democrats; 42 percent approved.

“It’s evident that there will be more and more tragic mass shooting incidents that will force him to act,” said Po Murray, chair of Newtown Action Alliance, a group formed after the 2012 Sandy Hook Elementary shooting in Connecticut. “We’re losing 100 Americans to gun violence every day and it’s not sustainable.”

In response to criticism, the White House has stressed that legislative fixes are a priority. Biden will make the same point on Thursday. Several bills he has supported include expanding background checks; closing the so-called Charleston loophole that allows a gun to be transferred from licensed gun dealers before a completed background check; and banning assault weapons and high capacity magazines. The House has already passed bills to expand background checks and close the Charleston loophole, but they face a tough path in the Senate.

The senior administration official described the actions Biden is set to unveil as the first step in a series of proposals to address mass shootings, community violence that disproportionately affects Black and brown Americans, domestic violence and suicide by firearms.

“This is an initial set of actions to make progress on President Biden’s gun violence reduction agenda,” the official said.

Advocates who are pushing for gun restrictions had suggested dozens of other actions, including prohibitions on firearm purchases for those convicted of domestic violence against their partners; alerts to law enforcement agencies when a potential buyer fails a background check; and federal safety storage guidelines.

“We are glad to hear the administration’s commitment that today’s actions are just the beginning,” said John Feinblatt, president of Everytown for Gun Safety.

Biden’s announcement comes as gun sales have skyrocketed amid a year of pandemic quarantines, a summer of racial unrest, and the president’s victory in the 2020 election, during which he promised an aggressive push to reduce gun violence. The year 2020 saw a record number of gun homicides in the United States.

The White House has held several meetings on gun violence with prominent groups pushing for gun restrictions, community-based groups, and survivors of gun violence. The meetings were led by Susan Rice, director of the Domestic Policy Council, and Cedric Richmond, director of the Office of Public Engagement.

“With this investment of our federal tax dollars, we have an unprecedented opportunity

to build an infrastructure of peace to heal and disrupt cycles of violence,” said a coalition of community groups dubbed Fund Peace that pushed for funding.

Biden has a lengthy history of dealing with gun legislation, though his most recent effort ended in notable failure. After the shooting in Newtown, Conn., President Barack Obama asked his then vice president to push through what he had hoped would be the biggest firearms restrictions since the Clinton administration. But after months of meetings and limited executive actions, a bill to require expanded background checks died on the Senate floor.

The Senate is even less Democratic now, split 50-50. Any bill would require at least 10 Republicans to vote with all Democrats, which is unlikely.

Igor Volsky, executive director of the advocacy group Guns Down America, said he hoped Biden would unveil a comprehensive plan that includes regulations, executive actions, funding and a strategy to get legislation through Congress.

“The president didn’t just run on executive actions when it comes to gun violence,” Volsky said. “He promised to put forward a robust comprehensive plan for reducing gun violence. Given the violence he inherited, we expect him to live up at the promise.”

With reporting by Betsy Woodruff and Josh Gerstein