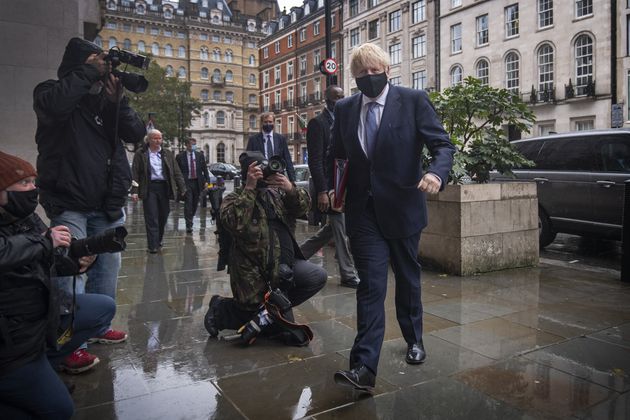 The British public should live “fearlessly” but with “common sense” as the Covid-19 pandemic gathers momentum again this winter, Boris Johnson has said.

The PM also defended the much-criticised test and trace system, saying it was “not perfect” but “outstanding” compared to other countries’, and said chancellor Rishi Sunak’s Eat Out To Help Out scheme, which has been blamed for a spike in infections, has saved thousands of jobs.

Speaking to BBC One’s Andrew Marr Show as the virtual Conservative Party conference gets underway, the prime minister also answered Tory critics who claim the leader has lost his spark and may be battling so-called “long Covid”.

“It’s not tittle tattle, it’s drivel,” he said, warning it would be seen as “totally inappropriate” to approach the pandemic with “buoyancy and elan” when lives were at stake.

Pressed on his health, after he spent time in intensive care earlier this year, he said: “No, I had a nasty bout, no question.”

Denying he had long Covid, which sees exhaustion continue for months, he said: “No, no, not in my case.”

He added: “It is not tittle tattle, it is balderdash and nonsense.

“I can tell you I’m fitter than several butchers’ dogs.”

The PM also sounded the alarm that the run up to Christmas could mean further lockdown restrictions.

Prime Minister Boris Johnson on local restrictions: “I know people are furious with me and they’re furious with the government but… it’s going to continue to be bumpy through to Christmas. It may even be bumpy beyond”#Marr#Covid_19https://t.co/iUFQLFuY4Jpic.twitter.com/YVAKc3CzuW

“I appreciate the fatigue that people are experiencing… but we have to work together, follow the guidance and get the virus down whilst keeping the economy moving,” he said.

Presenter Andrew Marr then interrupted and said “people are exhausted, they’re furious,” before Johnson replied: “They’re furious at me and they’re furious for the government, but… I’ve got to tell you in all candour it’s going to continue to be bumpy through to Christmas, it may even be bumpy beyond.”

He added the government was trying to strike a balance, adding: “What we want people to do is behave fearlessly but with common sense, to follow the guidance – whether national or local – get the virus down but allow us as a country to continue with our priorities.”

Johnson said the UK would be in a different position in spring, but pressed on whether his government had “overpromised and under-delivered” during the pandemic, he said it was important to offer “hope”.

He went on to say he does not “want to get people’s hopes up on the vaccine unnecessarily”.

He said: “It’s possible that we will make significant progress on the vaccine this year.

“I went to see the scientists at AstraZeneca in Oxford and those teams and they seem to be doing fantastically well.

“But I don’t want to get people’s hopes up on the vaccine unnecessarily because I think there is a chance but it is not certain.”

Asked about the Eat Out To Help Out scheme and claims that government was pressing people to return to the office earlier, Johnson said: “I think it was right to reopen the economy. I think if we hadn’t done that Andrew, if we hadn’t got things moving again in the summer, I mean we would be looking at many more hundreds of thousands of jobs lost.”

Amid claims the Eat Out To Help Out meal voucher scheme had spread the virus, Johnson simply said it was “important” to keep jobs viable.

He said: “I also think, I also think that it is important now, irrespective of whether Eat Out To Help Out you know, what the balance of there was, it unquestionably helped to protect many… there are two million jobs at least in the hospitality sector.

“I hope you understand the balance we’re trying to strike.”