Colombian army ‘false positives’ scandal: ‘No one listened to us’

A transitional peace court has concluded that more than 6,400 other civilians were extrajudicially killed by the Colombian military between 2002 and 2008 [Christina Noriega/Al Jazeera]

On a Tuesday morning in March 2008, Eduardo Garzon failed to show up for his job at a working-class restaurant that he co-managed in Bogota, Colombia. His whereabouts remained unknown for the next five months until his mother discovered Garzon had died 300 kilometres (186 miles) away from their home in an alleged confrontation with the military.

Official reports that claimed Garzon was a dangerous rebel with the Revolutionary Armed Forces of Colombia (FARC) ultimately unravelled one of the worst human rights abuses in Colombian history known as the “false positives” scandal, in which military officers executed and falsely represented young civilian men as enemy combatants.

More than a decade later, a transitional peace court concluded that Garzon and more than 6,400 other civilians were extrajudicially killed by the Colombian army between 2002 and 2008. The figures exceeded the number previously reported by the government by almost threefold.

“We’ve always said there are more victims than they say there are, but no one listened to us,” said Ana Paez, Garzon’s mother and vice president of the organisation Mother of False Positive Victims in Soacha and Bogota.

Ana Paez, mother of Eduardo Garzon, urges retired general Mario Montoya to tell the truth during his testimony before the JEP [Christina Noriega/Al Jazeera]The Special Peace Jurisdiction (JEP), a court set up by the 2016 peace deal, is trying atrocities related to more than 50 years of armed conflict in Colombia. While reports of extrajudicial killings go back decades, the JEP has found that these cases peaked between 2002 and 2008, during the administration of former President Alvaro Uribe.

The findings contradicted a 2018 report released by the Attorney General’s Office that found a total of 2,248 cases of extrajudicial killing committed between 1988 and 2014.

Human rights groups have argued for years that the practice of military members killing and falsely representing civilians as enemy combatants was more widely spread than the Colombian government acknowledged.

“We’re glad that the JEP has recognised the magnitude of this situation, but we are also concerned that the Attorney General’s Office has concealed more than two-thirds of crimes and their perpetrators,” said Alberto Yepes, a lawyer with the Colombia-United States-Europe Coordination (CCEEU), a coalition representing 281 rights groups.

The CCEEU reported at least 5,763 cases between 2002 to 2010 to the JEP last year. A 2018 report, compiled with official sources and independent research, estimated that more than 10,000 civilians were murdered during this same period.

“The JEP is proving us right,” said Omar Rojas Bolanos, co-author of the 2018 study.

“If they continue to investigate, the country will be shocked [at what they find out].” 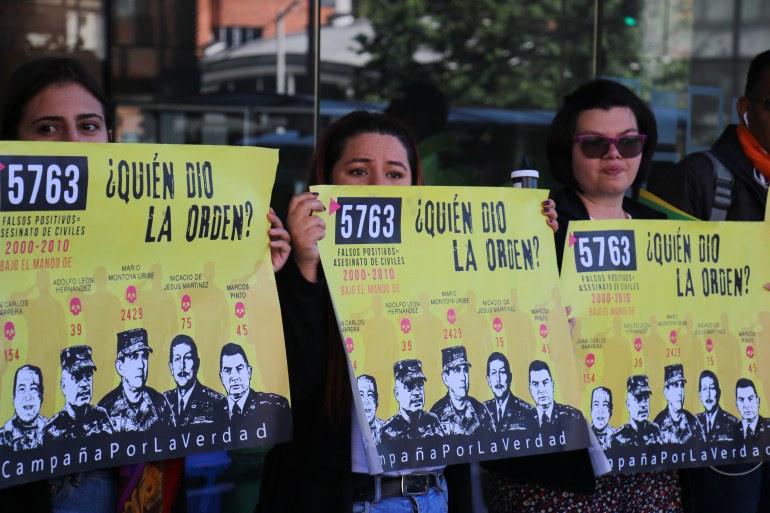 During Mario Montoya’s testimony to the JEP, activist protest outside holding signs that say 5,673 civilians were killed [Christina Noriega/Al Jazeera]The Attorney General’s Office said they were reviewing their latest figures from 2018.

“The figures reported are from the previous administration of Nestor Humberto Martinez, not the current administration,” said Paola Tomas, a spokesperson for the Attorney General’s Office. “We’re checking the numbers and figuring out what’s going on.”

The surge in “false positive” cases in 2002 coincided with an incentives programme created by the Uribe administration that incentivised combat kills with vacations, promotions and military training abroad. Inflated body counts, produced by these extrajudicial executions, helped Uribe support claims that the military campaign against the FARC would soon be won and justified billion-dollar US aid packages.

“The figures show that this couldn’t have been the work of just low and mid-ranking soldiers,” said Yepes. “The JEP shows that 78 percent of cases took place under the administration of Alvaro Uribe. This means that they either ordered the crimes perpetrated or that they knew that they were happening.”

Human rights groups have called on Uribe to appear before the JEP. Former President Juan Manuel Santos, Uribe’s minister of defence from 2006 to 2009, is also being urged to testify. Santos received a Nobel Peace Prize for facilitating the 2016 peace deal.

In a Twitter post last week, Uribe disputed the court findings and alleged the court intended to damage his reputation. He also defended himself against accusations that blamed his heavy-handed security policies for the surge in killings during his presidency.

“No military person can say they have ever received a bad example or improper insinuations from me,” the post read.

Jose Miguel Vivanco, Americas director of Human Rights Watch, accused Uribe of distorting the truth in his Twitter thread, and offered evidence that contradicted Uribe’s claims that he prioritised captures over combat kills during his presidency.

Part of the JEP’s tasks is investigating how high within the military ranks and in the government knowledge or responsibility for these crimes went. The JEP is authorised to grant military members under investigation by the Attorney General’s Office benefits, including conditional freedom and lighter sentences, for contributing to the truth.

Yet, human rights organisations are concerned that there may be a “pact of silence” among military members to conceal who ordered the execution of civilians. In early February, the National Movement for State Crime Victims criticised lawyers who are instructing military members to avoid mentioning army commanders.

The highest-ranking official to appear before the transitional court, retired General Mario Montoya, testified last year that insubordinate soldiers were responsible for the crimes. He denied any involvement or knowledge of the executions that occurred during his tenure as army commander from 2006 to 2008.

Some victims’ lawyers, like German Romero, believe the JEP’s “bottom-up” approach to its investigation, focusing on middle-ranking military officers before the high-ranking officials, is flawed because it follows the same strategy taken by the government. 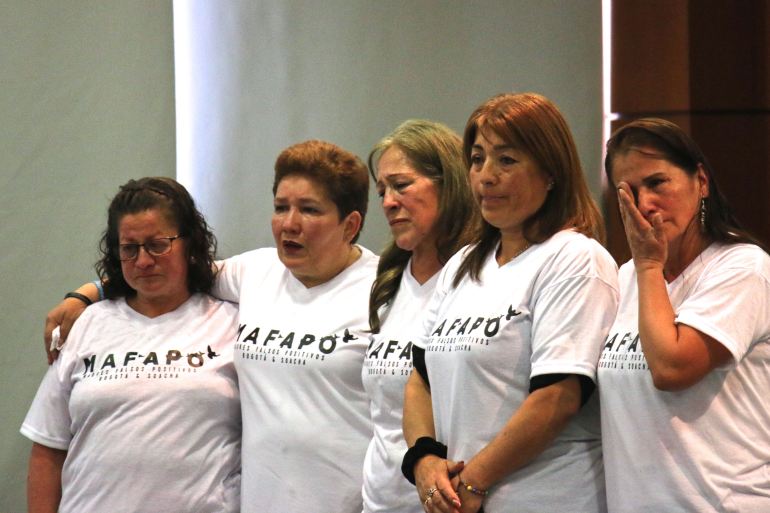 Women whose family members were killed by the military in “false positive” executions present a report to the JEP [Christina Noriega/Al Jazeera]“The JEP is repeating what the Attorney General’s Office has already done and listening to those who have already been accused or convicted,” said Romero.

While the Attorney General’s Office has convicted hundreds of rank-and-file soldiers, it has yet to accuse a general of involvement in the “false positives” killings.

“The JEP has a 10-year mandate, of which three years have already passed,” said Yepes. “At this rate, we think it’s difficult that they’ll reach the maximum responsible in the military leadership.”