Crypto mania! Bitcoin leaps past $52,000 for the first time

For some, the Bitcoin rally is a symptom of the speculative frenzy caused by ultra-low interest rates and other stimulus measures. Others say cryptocurrencies are becoming more mainstream.

Bitcoin’s incredible rally shows little sign of abating yet after the token jumped past $52,000 for the first time.

The largest cryptocurrency was little changed in Asian trading Thursday at about $52,100 after a fivefold surge in the past year

Bitcoin’s rally for some is emblematic of speculative froth in financial markets awash with stimulus. The crypto faithful counter that the digital asset is grabbing more mainstream attention, especially after Tesla Inc.’s recent $1.5 billion purchase. MicroStrategy Inc. boosted its convertible debt sale to buy Bitcoin by nearly half to $900 million and cut the coupon to 0%, making it virtually a straight bet on the price of the cryptocurrency.

MicroStrategy’s step is “a warning sign if there ever was one that things are getting out of hand in the crypto world,” Jeffrey Halley, a senior market analyst at Oanda Asia Pacific Pte, wrote in emailed comments. 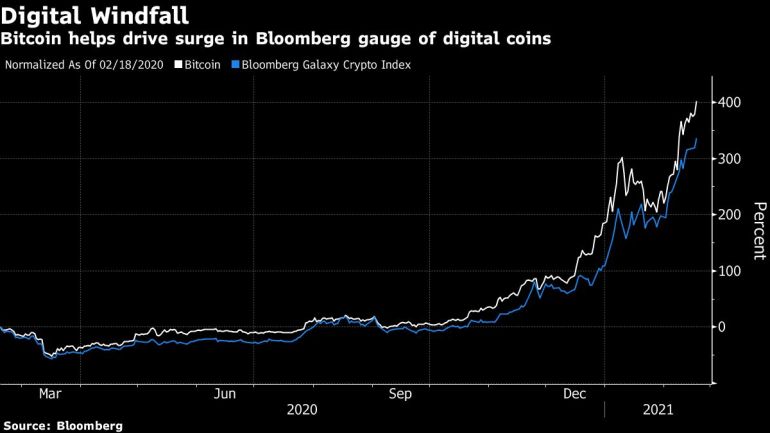 [Bloomberg]Others take a different view, contending that demand from institutional investors and companies is set to expand, driving further gains.

“There are a number of reasons why Bitcoin is soaring, but what stands out most is the trend that MicroStrategy started and Tesla popularized: moving institutional balance sheets into Bitcoin to hedge against inflation,” said Nicholas Pelecanos, head of trading at NEM.

Activity in Bitcoin futures suggests traders don’t see a sudden end to the crypto rally, with spreads continuing to widen between the active contract and March futures, according to data compiled by Bloomberg.

Shares of Asian crypto-linked companies have advanced, too. Japan’s Monex Group Inc. jumped 11% to hit a 13-year high on Wednesday, while BC Technology Group Ltd. in Hong Kong closed at a record. Both stocks were down Thursday in Asia, though. 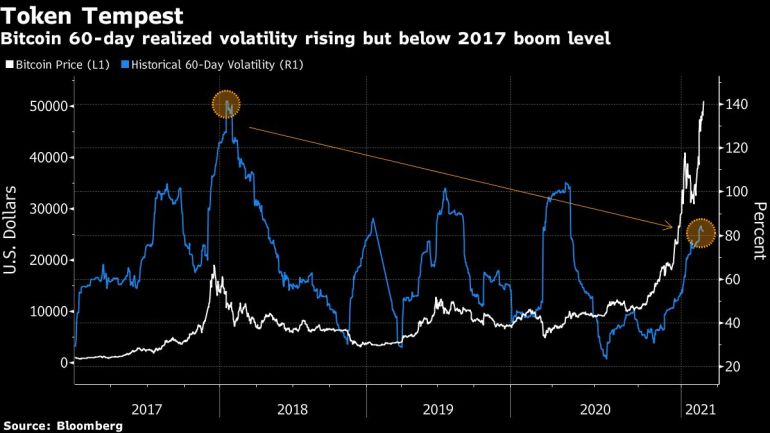 [Bloomberg]JPMorgan Chase & Co. strategists said Bitcoin’s volatility needs to ease to prevent its rally from fizzling. Other commentators see a mania likely to end in a bust akin to the implosion in 2017.

The digital coin’s 60-day realized volatility is around the highest since May last year, though still below the levels seen around the peak of its last boom some three years ago.