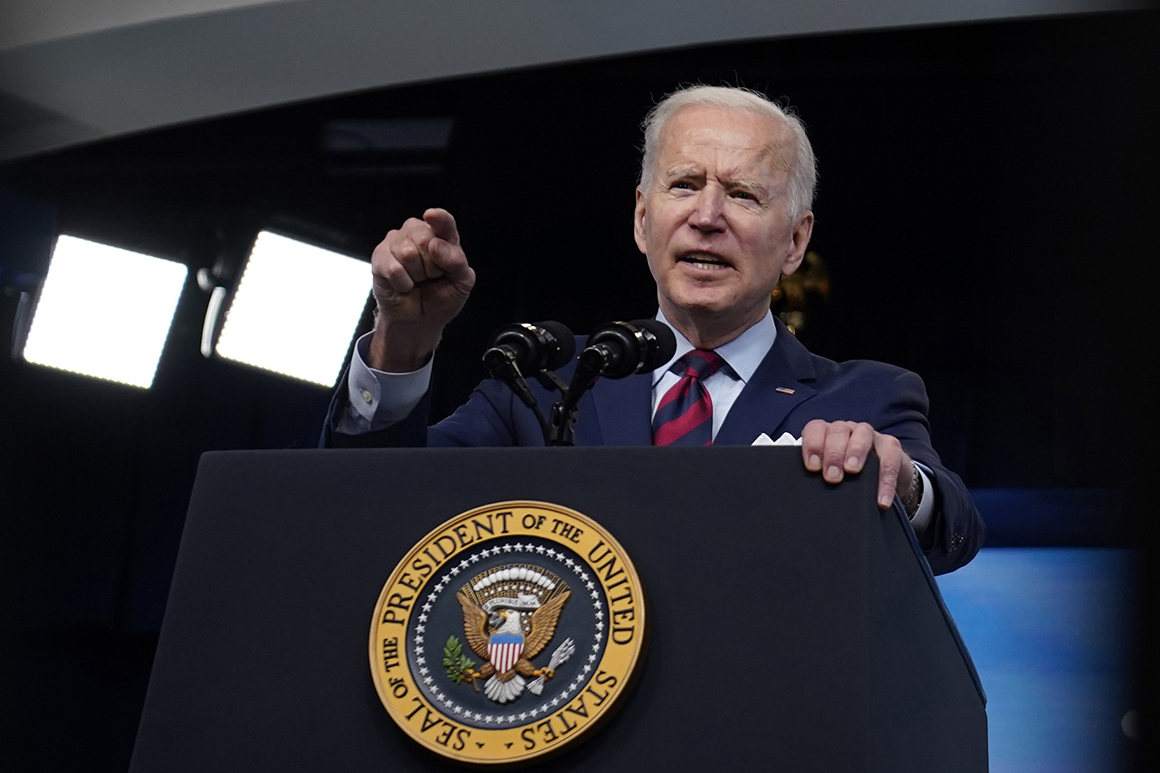 President Joe Biden speaks during an event on the American Jobs Plan in Washington on Wednesday.

“I didn’t hear anybody hollering in this recovery, so-called, before I became president, this k-shaped recovery. … Where is the outrage there?” Biden said in a White House speech. “I’m not trying to punish anybody. But damn it, maybe it’s because I come from a middle-class neighborhood, I’m sick and tired of ordinary people being fleeced.”

Biden’s $2 trillion-plus infrastructure package includes funding for what is traditionally thought of as infrastructure — including money for things like roads and bridges — but also for broader, structural changes to the American economy. Biden’s plan would raise the corporate tax rate to help foot the bill. Corporations have largely opposed the plan, which comes after Biden signed a $1.9 trillion coronavirus relief bill into law in March.

“Compromise is inevitable,” Biden said, calling on Congress to come together on the plan. “But here’s what we won’t be open to. We will not be open to doing nothing. Inaction simply is not an option.”

“Yes, there is a lot in here that is infrastructure, but … our workers, our workforce is part of the backbone and the infrastructure of America’s economy and communities,” Psaki said.

In his speech Wednesday, Biden defended a changing definition of infrastructure.

“Two hundred years ago, trains weren’t traditional infrastructure, either,” Biden said. “The idea of infrastructure has always evolved to meet the aspirations [of] the American people and their needs. And it’s evolving again today.”

Transportation Secretary Pete Buttigieg also took on the definition of infrastructure in an interview with MSNBC on Wednesday.

“There’s this semantic debate that’s opening up. To me it’s a little bit beside the point,” he said. “I can’t imagine why someone would say, ‘I’m for broadband, we should definitely have rural broadband, but I’m going to vote against it because I don’t think it meets the traditional definition of infrastructure.’”

Republicans have pushed back against the Biden administration’s framing of the package and have argued it is too bloated. On the other side of the aisle, progressives have argued the plan doesn’t go far enough, while Sen. Joe Manchin (D-W.Va.), a moderate, has pushed back, saying that increasing the corporate tax to 28 percent is a nonstarter.

The package is unlikely to garner much, if any, Republican support, which would necessitate the plan’s passing via budget reconciliation and Democrats in the Senate to all be on board. Senate Minority Leader Mitch McConnell has said that no one in his GOP conference would vote for the spending bill.

Sam Mintz contributed to this report.