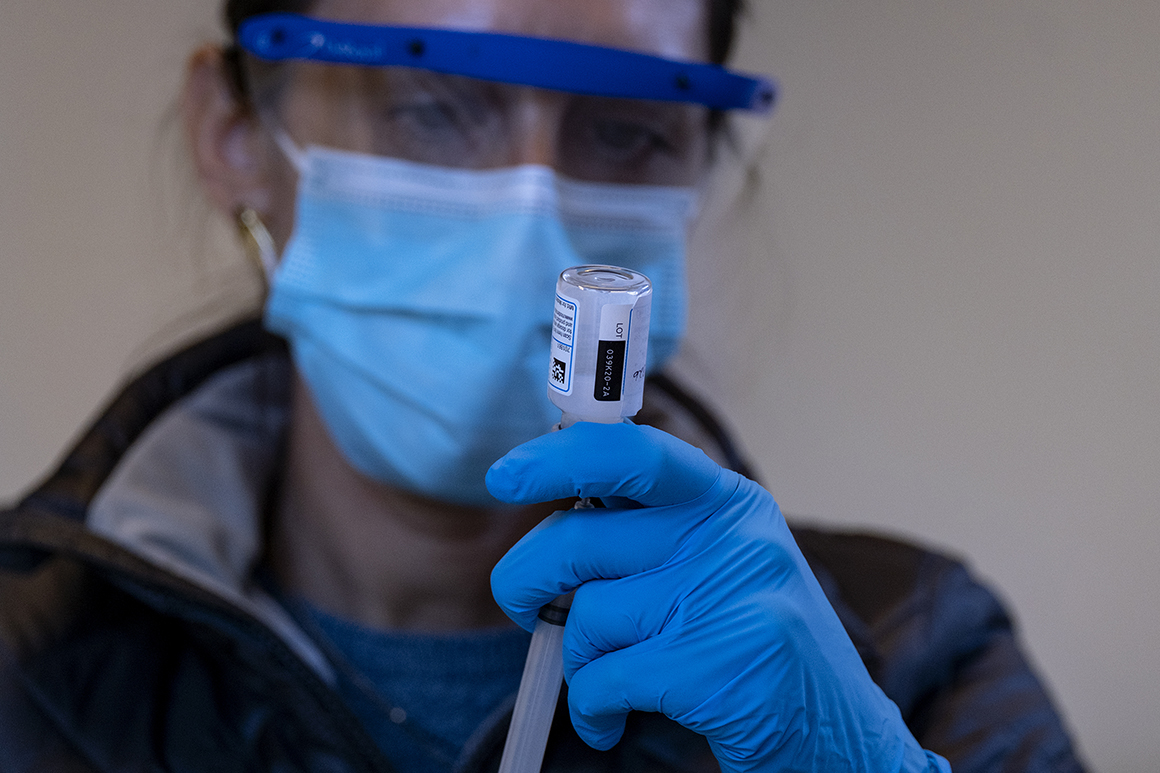 The Trump administration had set a goal of inoculating 20 million people by the end of last month, but only 9 million have received their first dose of the Covid-19 vaccine, according to the CDC. | Craig Ruttle/AP Photo

The Trump administration must urgently provide states with new resources and guidance to correct “significant failures” in the rollout of Covid-19 vaccines, according to a new letter from Senate Democrats shared with POLITICO.

The United States “cannot afford for this vaccination campaign to continue to be hindered by the lack of planning, communication, and leadership we have seen so far,” Democrats wrote to Health and Human Services Secretary Alex Azar, citing data that just over one-third of distributed vaccines have been administered. “The metric that matters, and where we are clearly moving too slowly, is vaccines in arms.”

With the Trump administration’s vaccination efforts hitting roadblocks and falling behind schedule, Joe Biden’s goal of 100 million vaccinations in 100 days is looking more out of reach by the day.

Vaccination efforts are well behind schedule after the Trump administration last month authorized a pair of Covid-19 vaccines that were developed in record time. Trump administration officials set a goal of inoculating 20 million Americans by the end of December, but only 9 million have received their first dose and nearly 25.5 million doses have been distributed, according to the Centers for Disease Control and Prevention.

President Donald Trump and some of his health officials said states must work faster to administer available doses, but Senate Democrats on Monday said the Trump administration’s failure to deliver a “long-overdue national plan” — with instructions on use of personal protective equipment, best practices on administering the vaccine and other tactics — has hampered the vaccine rollout.

A spokesperson for HHS countered that the federal government has increasingly provided resources and guidance for states, citing $3 billion in new funding for states and data showing progress with vaccinations.

“2.3 million vaccinations have been reported to the CDC since Friday morning, as we continue to see the vaccination effort pick up momentum,” the spokesperson added. “The federal government through the CDC provided a playbook to states in September and has been working with them ever since on vaccination plans.”

The letter comes as President-elect Joe Biden and his advisers grow concerned that the Trump administration’s vaccine response is “chaotic” and will potentially undermine Biden’s goal to deliver 100 million vaccinations within his administration’s first 100 days. Biden, after receiving his second dose of Pfizer’s coronavirus shot on Monday, said he’ll release a sweeping vaccine distribution plan on Thursday that will help meet that goal.

Hospitals and health care providers have also complained that the Trump administration has offered insufficient guidance and support for local vaccination efforts. Their latest criticism is that the federal government is providing syringes that are forcing them to waste potential doses of Pfizer’s coronavirus vaccine.