Boris Johnson has ordered a four-week national lockdown in England from Thursday, but is facing criticism that his delay in imposing restrictions will have a “very real” human cost.

The prime minister rejected calls last month for a short, sharp shutdown, but after local restrictions failed to reduce infections, he was forced to tell the country to “stay at home” once again.

From Thursday until 2 December, people in England will only be allowed to leave their homes for specific reasons, such as education, work or food shopping. Speaking at a Downing Street news conference on Saturday evening, Mr Johnson said there was “no alternative” to a second period of national lockdown restrictions.

The government’s scientific advisers have warned that hospitals could run out of beds by early December without new measures. The prime minister urged the country to return to his spring message of “stay at home, protect the NHS and save lives” and acknowledged that “Christmas is going to be different this year”.

However, Mr Johnson suggested that “tough action now” could allow families to be together over the festive period.

Mr Johnson said that “no responsible prime minister” could ignore the rising number of coronavirus infections across England.

And he warned that, without action, there could be a greater number of COVID-19 deaths this winter than during the spring’s first wave of the pandemic.

Schools, colleges and universities will remain open while those who cannot work from home, such as workers in construction or manufacturing, will be encouraged to continue going to their workplaces.

Pubs, bars and restaurants will close across the country, although they will be able to offer takeaway and delivery services.

Non-essential shops, hairdressers and leisure and entertainment venues will also be shut. 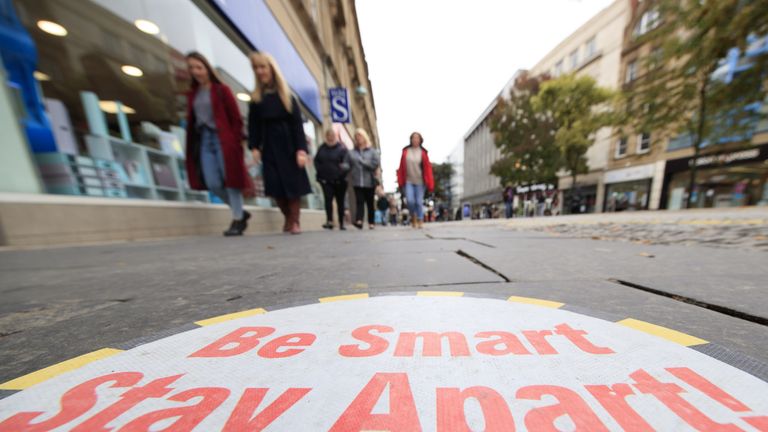 Image: England will enter a month-long lockdown from Thursday

The prime minister said the furlough scheme, which has seen the government pay a proportion of peoples’ wages during the COVID-19 crisis but was due to end on Saturday, would now be extended through November.

Different households will be banned from mixing, although support bubbles and childcare bubbles will remain and children will still be able to move between homes if their parents are separated.

Gyms will be shut but people can continue to exercise for unlimited periods outdoors, either with people from their own households or on a one-to-one basis with one person from another household.

People will be able to travel internationally for work, but will not be allowed to go abroad for holidays.

Premier League football and other elite sports will be allowed to continue, due to the testing regimes in place for professional sportspeople – but amateur sports will be put on hold.

The prime minister said those who are vulnerable would not be asked to shield in the same way as they did in the spring and early summer.

But he urged those who are at risk to minimise their contact with others and not go to work if they are unable to work from home.

MPs are expected to vote on the fresh measures on Wednesday.

It emerged earlier in October that the Scientific Advisory Group for Emergencies (SAGE), which advises the government on its response to the pandemic, called for a short lockdown in September, prompting Labour leader Sir Keir Starmer to urge Mr Johnson to impose such restrictions.

Sir Keir said on Saturday that Mr Johnson should have scrapped the regional strategy “weeks ago”.

“Everybody is concerned about the rise in infections, hospital admissions and – tragically – the number of deaths,” he said.

“That’s why three weeks ago, Labour called for a circuit breaker in England, in line with SAGE’s recommendation to bring infections down.

“The government completely rejected that, only to now announce the same thing. That delay in introducing restrictions will come at an economic cost and a human cost.

“I’m glad that the government has finally taken this decision – but it should have done so weeks ago.”

The British Medical Association also said it was “regrettable that warnings from SAGE were not actioned as long ago as 21 September”. Image: Sir Patrick Vallance warned deaths could be close to the peak of the first wave by early December

Also appearing at the news conference, England’s chief medical officer Professor Chris Whitty said there were now several hospitals with more coronavirus patients than they’d had during the first wave of infections.

Sir Patrick Vallance, the government’s chief scientific adviser, said that “if nothing is done” then the number of deaths could be close to the peak of the first wave by early December.

The prime minister highlighted how other countries, such as France and Germany, had already been forced to take similar action by re-entering lockdown restrictions as the second wave of the virus spreads across Europe.

But he said better medicine, the “realistic hope of a vaccine” in early 2021, and the prospect of millions of 15-minute COVID-19 tests made him optimistic “that this will feel very different and better by the spring”.

“We will get through this, but we must act now to contain this autumn surge,” Mr Johnson added.

“We are not going back to the full-scale lockdown of March and April.

“It is less prohibitive and less restrictive, but from Thursday the basic message is the same; stay at home, protect the NHS and save lives.”

Until now, the government has been pursuing a localised approach to COVID-19 restrictions, with England divided into three levels of measures, depending on local infection rates.

Mr Johnson said he still “passionately” believed the three-tier strategy “was the right thing to do”, despite growing calls over recent weeks for him to abandon the plan in favour of a “circuit break” lockdown.

The prime minister outlined the government’s aim that, after the month-long period of tougher national measures, different parts of the country will be released back into the existing three tiers, depending on regional transmission rates. Image: England is returning to the ‘stay home’ message from the spring

Analysis: The return of the blunt mantra of blanket lockdown

The prime minister uttered the phrase he hoped he’d never have to say again; “stay home, protect the NHS, save lives”.

The return of the blunt mantra of blanket lockdown.

It came with an acknowledgement there was no alternative to what he had previously described as the “nuclear option”.

The 80% pay furlough scheme that his chancellor had insisted would end today will now be extended until 2 December.

There are notable differences from the restrictions that were in place earlier in the year – not least that schools will stay open – but the public may be forgiven for that not being the main message.

Just yesterday senior cabinet figures were still adamant a national lockdown was not necessary and that the tiered approach was the right one.

What prompted such an abrupt change?

The message from the scientists’ data slides were used to substantiate the prime minister’s core message – failure to act could see the NHS overwhelmed in weeks.

This wasn’t to protect Christmas, as some had supposed, this was to prevent doctors and nurses being forced to ration who they can try to save.

The prime minister claimed the regional tier approach was right while there were disparities in the incidence rates in different areas.

But he acknowledged rates are now growing too quickly everywhere to stick with it.

In other words, Boris Johnson is not conceding he should have followed SAGE and the calls of Labour leader Sir Keir Starmer and instituted a “circuit breaker” lockdown two weeks ago.

The prime minster concluded by saying he was “optimistic” things would be much closer to normal by the spring, citing improved treatments, the prospect of a vaccine and rapid mass testing.

But back in July from the same podium, the prime minister expressed similar optimism that we might be easing restrictions significantly by November.

So much for that.