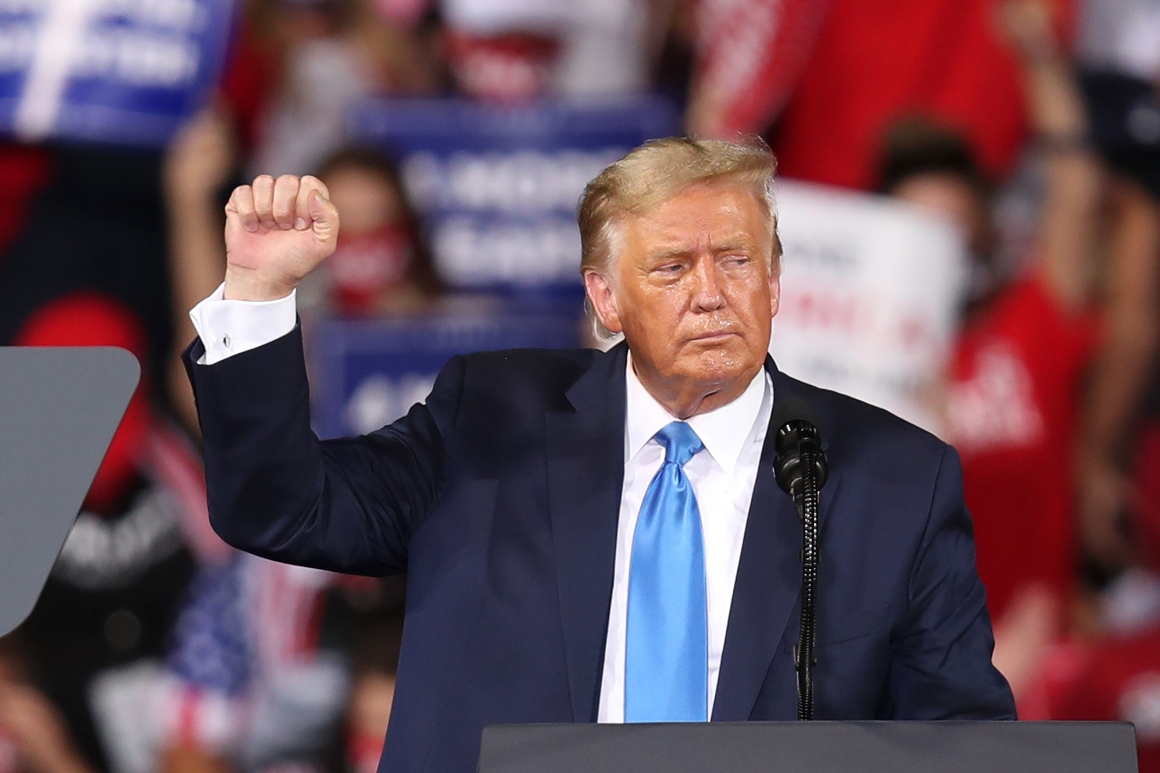 Following his defeat in the 2016 Iowa caucus, Donald Trump accused Ted Cruz of cheating and said the results should be nullified.

After winning the presidency that fall, Trump insisted, without evidence, that there was “serious voter fraud” in three states he lost to Hillary Clinton. Now, running behind Joe Biden in the polls, the president complains the outcome will be “rigged.”

After more than four years of nonstop voter fraud claims, insinuations that he might not accept the presidential election results and at least one float about delaying the November election, it’s no secret. Trump’s refusal to commit to a peaceful transition of power this week — and his choice not to walk back his remarks Thursday in the face of widespread unease — merely broadcasts his strategic intent in terms both parties can understand.

As a result, Republicans can no longer truthfully deny that Trump may be unwilling to leave office in the event he is defeated. And Democrats must now confront the possibility they may not have the power to stop him.

It’s an unprecedented backdrop for a modern presidential race, one that could stretch the electoral process to its limits, almost guaranteeing a chaotic, divisive finish to the campaign.

“We are superalarmed,” said Matt Bennett of the center-left group Third Way, which released a primer this week on how Trump is laying the groundwork to dispute the election results in the event of a defeat. “I now think it’s very, very likely that Joe Biden will win the election if the votes are counted, but it’s not clear that the votes will be counted.”

Recalling the 2000 election, in which the Supreme Court prohibited further recounts of the Florida vote, awarding the presidency to George W. Bush, Bennett said, “We’re a lot more organized than in 2000. A lot … But I don’t know if it’s enough.”

The killings of George Floyd and Breonna Taylor sparked a summer of outrage and calls for legislative action. But months later, not much has happened. POLITICO’s Nolan McCaskill looks at why police reform efforts have hit a wall.

Biden and the Democratic National Committee have been preparing for months for legal challenges following the election. Working with advocacy groups and state parties, they have spread thousands of political operatives and lawyers across the battleground map. One Democratic strategist who is working with mayors and governors on voter access issues in competitive states said Thursday that “I’ve been spending the last six weeks gaming out all the crazy things this man could do.”

“If you’re prepared,” the strategist rationalized, “it’s not as disturbing.”

Still, from his frequent musings about extending his presidency beyond the two terms mandated by the Constitution to his equivocations about accepting the election results, every indication is that Trump is priming the electorate for an unprecedented, postelection challenge to the nation’s democratic norms.

On Wednesday, he cited his expectation that “this will end up in the Supreme Court” when describing the significance of appointing a justice to replace the late Ruth Bader Ginsburg. Though White House press secretary Kayleigh McEnany said Thursday that Trump would “accept the result of a free and fair election,” the president followed up later in the day by saying he is not sure it will be “honest.”

“There’s an increasing fear that the months after Nov. 3 are going to be very, very trying times for this country. And I think that there is a mood shift in the caucus from a huge confidence that Biden was going to win to now seeing a little bit of tightening of the race in the battleground states and seeing Trump’s tactics,” said a Democratic House member who requested anonymity to talk frankly about the Biden campaign. “There’s a real fear that this could be a toss-up in a way that Trump will use every tool to cheat.”

No one should have been surprised. Voter fraud is rare in American elections, numerous studies have found. But that didn’t stop Trump from creating a commission to investigate his unsubstantiated claims of widespread voter fraud in one of his first acts as president. More important, Trump is lagging behind Biden nationally by about 7 percentage points, and the popular vote — which he lost in 2016 — is almost certainly out of reach for him again. More troubling for Trump is that Biden is ahead of him in most battleground state polls. One of Trump’s best chances of winning is to depress turnout in those swing states and to undermine confidence in the results.

Earlier this week, The Atlantic reported that the Trump campaign was discussing the possibility of Republican-controlled state legislatures bypassing election results discredited by Trump, and appointing electors to him instead. Democrats are already preparing for a “red mirage” scenario, a reference to the prospect that Trump will have election night leads in some states, before mail ballots are counted, and might use the opportunity to declare victory.

Amanda Renteria, national political director of Clinton’s 2016 campaign, said the difference between the closing weeks of the 2016 election and now is that Biden holds a more substantial lead nationally and in the battleground states. But Renteria also notes that Trump “has been able to carry a narrative that this thing’s going to be close … setting up a narrative that no matter what, even if there is a blowout, that it’s somehow rigged.”

In addition, Trump has executive powers he did not possess in 2016 — along with an iron grip on the Republican Party machinery in numerous battleground states that could facilitate his machinations. Many observers believed Trump’s Republican National Convention speech from the White House violated federal law, Renteria observed, but it went forward, anyway.

“The conversation about the ‘how to’ is what we need to be having right now, as we think about what happens when he doesn’t want to leave office, and I do know those conversations are happening,” she said.

In a nod to the gravity of the concerns, Sen. Bernie Sanders departed from custom in a speech Thursday in Washington billed as a “major address on Trump’s threat to democracy.” The two-time Democratic presidential candidate spent over a week writing it, used a teleprompter and strayed uncharacteristically from his standard stump speech about income inequality and health care — only mentioning the issues momentarily to say, “today I am not going to talk about any of them.”

“It is terribly important that we actually listen to and take seriously what Donald Trump is saying,” Sanders said.

Some Democrats fear they may not be doing enough to prepare. Rep. Ro Khanna of California said his party needs a more detailed plan than they currently have for how to handle any nightmare scenarios after the election.

“I think this has to be the highest priority,” he said. “We need a framework. We need a plan from the speaker and Senate leaders about how this election is going to proceed. Everyone sees the train wreck coming.”’

Biden’s campaign is assembling a voter protection staff with a far larger footprint than Clinton’s equivalent in 2016. In addition to a national voter hotline, it has set up 15 state-specific ones. It has a large team of lawyers, including two former solicitors general, Donald Verrilli and Walter Dellinger, and a group headed by Marc Elias, a prominent election law attorney, focusing on voter access and ballot counting in the states. The campaign says it will spend at least $100 million on voter-education efforts alone.

In Pennsylvania, a potential hot spot for Election Day chaos, Democrats have begun talking about their concerns that the GOP-controlled state Legislature might appoint pro-Trump electors regardless of the results, all under the guise of massive voter fraud.

“For the past 10 days or so, I’ve been getting so many questions about this from people involved in state politics,” said Adam Bonin, a prominent Philadelphia-based lawyer who brought a recent Democratic lawsuit seeking to make it simpler to cast a mail ballot in Pennsylvania.

But some Democrats don’t think there has been an adequate conversation on the topic yet. Asked whether the party is discussing how to respond, one state House member said, “Not enough.”

Your guide to the year-round campaign cycle.

Lyndsay Kensinger, the press secretary for Democratic Gov. Tom Wolf, said the administration is confident “this November’s election will produce a clear winner that must be respected by the General Assembly.” But Kensinger declined to discuss the legal options Wolf has to stop such a plan.

Biden himself, some Democrats believe, may not be the best messenger in the party’s effort to oppose Trump on issues surrounding the mechanics of the election. In part, that is because he is personally invested in the contest. Congressional Republicans maintain there will be a peaceful transition of power if Trump loses. And it may be more effective for Democrats to highlight concerns of some moderate Republicans, and to encourage others to speak out.

In addition, the Biden campaign is still trying to win votes — something separate from concerns about what happens after — laboring to keep the focus of the election on Trump’s handling of the coronavirus pandemic and the economy.

Kate Bedingfield, Biden’s deputy campaign manager and communications director, told reporters on Thursday that Trump is “trying to distract from his catastrophic failures.”

“What country are we in?” Biden told reporters when asked about Trump’s unwillingness to commit to a peaceful transition of power, according to a pool report. “I’m being facetious. I said what country are we in? Look, he says the most irrational things. I don’t know what to say.”

Still, Doak offered on Twitter that Biden could say something more forceful, such as, “This indicates he thinks he is going to lose, which most polls indicate, it is an extreme profession of weakness” — countering Trump’s effort to portray the election as closer than it is, and to cast doubt on its outcome.

“The history of Trump is that we have underestimated him and his venality at every turn,” he said. “We’re in a perilous time right now.”