Governors face a growing outcry over inflexible vaccine policies that are now being blamed for leaving millions of doses to pile up in freezers — and some to land in the trash.

Pharmacists and hospital leaders, scrambling to get the scarce Covid-19 vaccine doses into the arms of the willing, are begging state leaders not to tie their hands. They say a patchwork of Byzantine-like state regulations — and, in at least one case, the threat of monetary penalties for stepping out of line — have left the medical community paralyzed over what to do with extra supplies.

The Trump administration put it all on governors to decide how shots would be administered and who would get them first. Now, instead of moving rapidly through all the available doses, some states have been trapped by their own policies as pandemic deaths and hospitalization continue to hit new records. Urgency around the problems was growing on Monday as it compounded the nation’s already slow immunization campaign with another manufactured crisis.

“The more rules we create, the more penalties we put in place, the fewer vaccines that are going to be delivered,” former FDA Commissioner Scott Gottlieb said Monday on CNBC. “That’s the bottom line.”

With the Trump administration’s vaccination efforts hitting roadblocks and falling behind schedule, Joe Biden’s goal of 100 million vaccinations in 100 days is looking more out of reach by the day.

In New York, Gov. Andrew Cuomo spent weeks insisting that only health care workers can get the shots, even as many refused, and only began to ease restrictions in recent days. In California, Gov. Gavin Newsom assembled sprawling expert committees to weigh complicated rules for distribution, miring the effort in bureaucratic confusion.

The feds have sent 1.2 million doses to New York, but about 605,000 people have received a shot. California shipped nearly 2.5 million doses to local health departments and health care systems, but just over 783,400 vaccinations have been administered. President-elect Joe Biden has set the formidable goal of injecting 100 million doses during his first 100 days in office.

“Pharmacists are trying to do the right thing, and they know the importance of not allowing vaccines to go to waste,” said Mitchel Rothholz, the immunization policy lead for the American Pharmacists Association. “But on the same hand, when we have discussions going on in California and New York, they need to know their back is covered if they make a judgment call.”

The slow and cumbersome response from states comes after the federal government offered little support to governors, both in terms of policy direction and boots-on-the-ground reinforcements. State leaders have been left to make major decisions about distribution on their own, while facing worsening problems like a workforce shortage and funding issues that will persist until the nearly $9 billion Congress approved to help vaccine distribution is distributed.

Other states have loosened their rules or tried different strategies to guard against wasting shots. New Jersey and the District of Columbia, for example, explicitly allow pharmacies and other providers to give any unused vaccines to the public on a first-come, first-served basis. 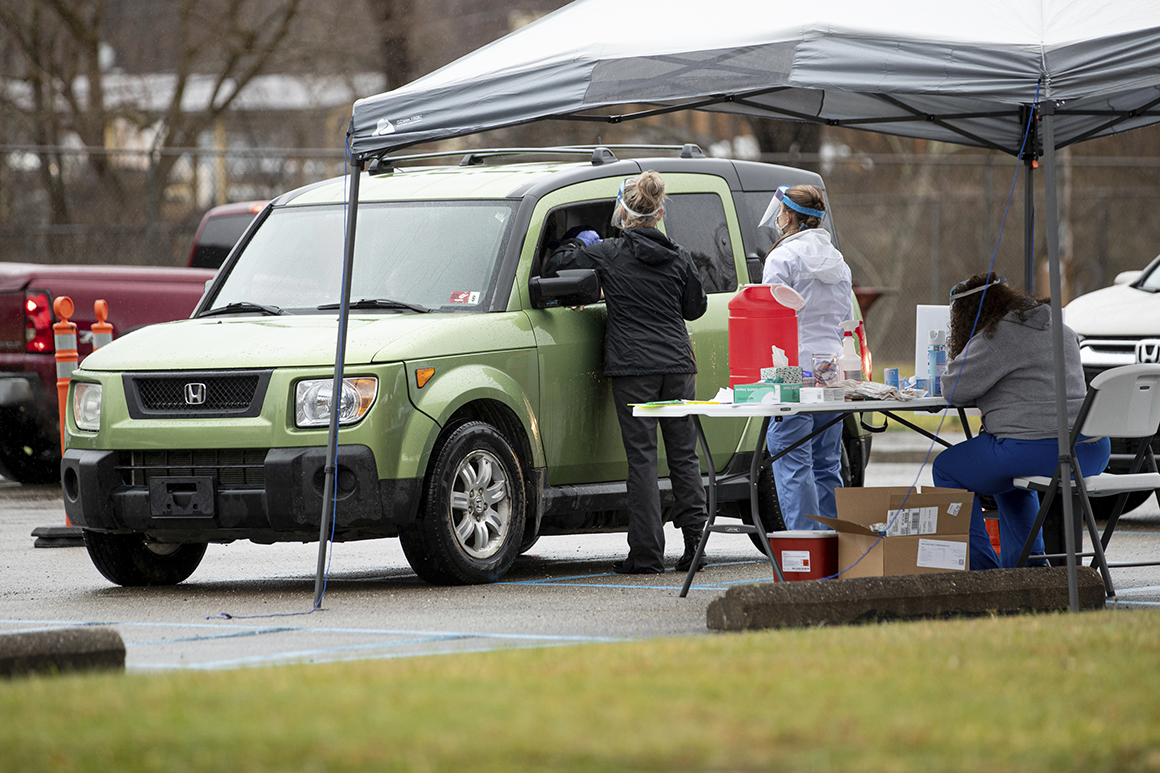 And in West Virginia, where officials jettisoned the federal distribution framework for vaccinating nursing home and assisted-living residents and staff in favor of their own network of largely independent pharmacies, everyone over 80 has already had their first shot — and nursing home residents are starting on their second. The state has also begun immunizing schools and colleges. While it’s a sparsely populated rural state — defying direct comparisons to larger more urban states — West Virginia has administered nearly 90,000 of the 126,000 shots it’s received.

While New York and California officials have drawn the most heat for their limiting rules, few states have escaped criticism for their cumbersome rollouts.

Virginia, for instance, is struggling to keep up with distribution, in part because providers don’t know how to check if someone’s eligible, the Richmond Times-Dispatch reported. Observers of Maryland’s sluggish rollout — where two counties have hardly used any of their allotted doses and even Baltimore City is still sitting on most of its shots — have also theorized that overthinking prioritization is part of the problem.

But on the opposite end of the spectrum from New York and California, Florida has relaxed its rules to give the vaccine to anyone over 65 — and is now facing a flood of older adults who, locked out of getting the vaccine in their home states, are flocking to the vacation destination. The ensuing free-for-all has made for long lines and lots of confusion, even as it’s highlighted the barriers for elderly in the rest of the country to get immunized.

The regional contrasts are only adding to the pressure on leaders of the poor-performing campaigns to step up their efforts.

“We should follow CDC protocols, and if the state has doses that are going to expire, give them to anyone you can before they become useless,” California state Assemblymember Jordan Cunningham, a Republican, said of his own state’s strategy. “Pretty simple.”

Cuomo, a Democrat, has begun responding to growing pressure.

On Monday, New York first responders, teachers and adults over the age of 75 began getting their first doses of the Covid-19 vaccines, days after Cuomo reversed his policy of reserving doses for health care workers. The governor further announced a new Public Health Corps to accelerate vaccine delivery across New York as part of his 2021 State of the State priorities.

“We would rather have people signed up and awaiting the vaccine, than have the vaccine awaiting people,” Cuomo said during the Monday address, delivered virtually from the state Capitol.

“The state has to relent here,” the Democratic mayor said Friday, before Cuomo updated the state’s vaccine policy. “They’ve created a situation that’s creating fear and confusion and where doctors can’t act, even when they know someone is vulnerable.”

New York county officials, meanwhile, cautioned that the state’s “use it or lose it” policy, along with announced penalties for providers that knowingly misallocate doses, only added to the confusion. They also pushed for opening up vaccinations to first responders and older residents. Such concerns were not lost on state lawmakers.

“The vaccine rollout, as we know it, has been extremely disappointing,” New York Senate Majority Leader Andrea Stewart-Cousins, a Democrat, told reporters on Monday.

In California, where officials have set up a working group and a 60-member advisory committee to try to make distribution equitable, Newsom on Monday pushed back on criticism that these efforts are slow-walking the process.

California officials spent last week trying to organize ways to get doses distributed — an issue that came to the forefront when a broken freezer compressor at a Northern California hospital forced the staff to use up the 830 thawing doses as quickly as possible, injecting members of the community outside the state guidelines to avoid having any of the vaccine go bad.

Newsom acknowledged his current strategy “is not going to get us where we need to go” as fast as is necessary. But he stood by his goal of vaccinating an additional 1 million people by this weekend, for a total of more than 1.4 million immunizations statewide. To get there, he’s offered mass vaccination sites, the ability for vaccinators to move on to other tiers if they’ve exhausted vaccinations in the current phase, and expanded the health workers authorized to administer the vaccine.

Observers of the nationwide mayhem have mostly blamed the federal CDC, where officials laid out guidelines for who should get priority to be vaccinated but left it to the states to set the actual rules.

Amid all the criticism, Biden has pledged to release all available vaccine doses when he takes office as a way to speed up the process — a shift from the Trump administration’s strategy to keep reserves for second shots in the two-dose regimen.

The CDC defended the decisions, saying its recommendations “are meant to be fluid and not restrictive.” The agency says state officials should hit a “sweet spot that maximizes getting vaccines into arms while also being mindful of the priority groups.”

But the huge differences in speed and efficiency across the country put plenty of blame on state and local leaders overseeing the most sluggish rollouts. And hospitals and pharmacies say more regional policies are complicating the already difficult distribution logistics and forcing waste.

Rick Pollack, CEO of the American Hospital Association representing some 5,000 hospitals across the country, said his members are bumping into situations where they’ve inoculated all their health care workers as defined by the first distribution phase, but there’s no guidance for the leftover doses.

“[The vaccine] does no good in a refrigerator, but you can’t go beyond what’s in [Phase] 1a, or what the allocation is for,” Pollack said. “That’s what leads to this notion of, ‘you’ve got to get it out, but your hands are tied.’”

For now, Pollack and Rothholz and their organizations want a more cohesive federal coordination of the rollout, including clear policies laying out how to manage the unused or unclaimed doses — and many experts agree with them.

“The campaign has been poorly planned, and badly funded at the national level,” said Lawrence Gostin, university professor and public health legal expert at Georgetown Law. “The public has the perception that we are just winging it, and in many ways they are correct.”