Hedge fund king, a GOP megadonor, faces off with Democrats 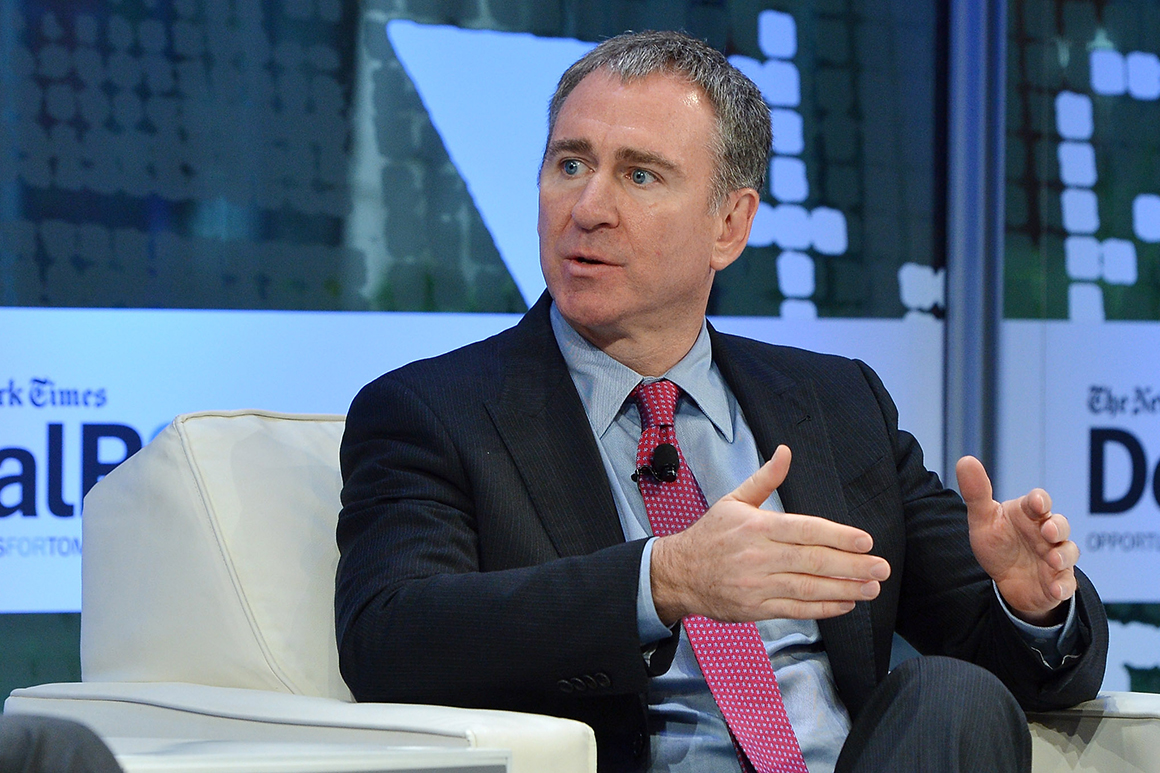 Ken Griffin, who started trading from his Harvard dorm room, has previously appeared in front of Congress and faced tough questions about his business practices. | Larry Busacca/Getty Images for The New York Times

Hedge fund billionaire Ken Griffin bet big in recent years to keep Washington in the control of Republicans. Now he is the first target of Democrats in the Biden-era Wall Street crackdown that’s just beginning to unfold.

House Democrats on Thursday will get their chance to grill the GOP megadonor, who has emerged as a key figure in the GameStop stock trading frenzy. Griffin, who spent more than $61 million to boost Republicans in last year’s elections, is one of the star witnesses at a hearing on GameStop and other struggling companies whose shares surged — then swung dramatically — in recent weeks thanks to legions of investors on the social media site Reddit.

Democrats plan to dissect the pivotal behind-the-scenes role that one of his firms, Citadel Securities, and others like it play in handling massive volumes of trades routed to it by online stock brokerages like Robinhood in return for paying the brokerages hundreds of millions of dollars per year. Citadel Securities’ role as the middleman — little known to most of the small traders that use the online brokerages — has raised questions about conflicts of interest in the stock market and whether individual investors are benefiting from the arrangement.

“Some big players are paying good money for a window into market behavior,” said Rep. Jim Himes (D-Conn.), a former Goldman Sachs vice president and now a senior member of the Financial Services Committee, which will conduct the hearing. “I really want to make sure that we’re not giving some big players information about the market that is not available to everyone.”

The blockbuster hearing underscores the ripple effects being felt on Wall Street and Washington because of the GameStop frenzy, which attracted lawmakers’ attention after Robinhood and other brokerages suddenly prevented customers from buying shares even as sophisticated traders still had access to the market. The drama has quickly made hedge funds and trading firms like Griffin’s fair game for Democrats like House Financial Services Chair Maxine Waters (D-Calif.) and Senate Banking chief Sherrod Brown (D-Ohio) as well as President Joe Biden’s incoming team of financial regulators.

Griffin, who started trading from his Harvard dorm room, has previously appeared in front of Congress and faced tough questions about his business practices. But he hasn’t seen much scrutiny from Capitol Hill in recent years, even though he has been an influential force shaping financial market rules.

He’s also a major player in politics across the country, thanks to his generous campaign contributions. He supported Barack Obama early in the 2008 presidential election but has devoted most his largess to Republicans — but never directly to Donald Trump’s campaigns.

In 2019, Griffin told private equity billionaire David Rubenstein in an interview that it was important for political candidates to “support personal rights [and] personal liberty” as well as education.

According to the Center for Responsive Politics, Griffin was the fifth-biggest political donor in the 2020 election cycle, behind other business giants such as Michael Bloomberg and Sheldon Adelson. He made $61.4 million in total contributions, nearly every dollar of which went to support GOP contenders. On the Financial Services Committee, he gave directly to several Republican members’ campaigns, including senior lawmakers such as Reps. French Hill of Arkansas, Andy Barr of Kentucky, Ann Wagner of Missouri and Bill Huizenga of Michigan.

Citadel has actively recruited former government officials who played key roles in economic policy and financial regulation. Former Federal Reserve Chair Ben Bernanke is a senior adviser to the firm. Steve Luparello, once a lead markets regulator at the Securities and Exchange Commission, is the general counsel of Citadel Securities, which also hired another former SEC official, Gregg Berman, as its director of market analytics and regulatory structure. A former chair of the Commodity Futures Trading Commission, which regulates derivatives markets, is one of Citadel’s lobbyists.

“Ken Griffin is a perfect example of how the financial industry uses its economic power to buy political power,” said Dennis Kelleher, who advocates for tougher Wall Street oversight as head of the watchdog group Better Markets. “Which protects and increases its economic power.”

The outcome of Thursday’s hearing could have major implications for the businesses that have helped make Griffin one of the wealthiest people in the world.

The GameStop frenzy raised suspicions about the Citadel family of companies because of speculation that they may have influenced the late January trading halts triggered by the spike in purchases of GameStop and other firms.

Griffin’s companies played two high-profile roles in the tumult. One trading business paid Robinhood and other brokerages to execute their customers’ stock trades. A separate investment management business led by Griffin invested $2 billion in a hedge fund, Melvin Capital, that was suffering after it had bet that GameStop’s stock would fall.

The trading halts attracted the attention of lawmakers who first complained that they were unfair because the restrictions shut out individual “retail” investors while other Wall Street players could continue to transact. The two Citadel businesses have denied playing a role in any brokerage’s decision to stop trading.

Robinhood, the app-based online brokerage that exploded in popularity last year and was used by many of the GameStop traders, denied that it was influenced by outside hedge funds. Robinhood said it slowed trading so it could address $3 billion in financial obligations owed to a stock clearinghouse.

Lawmakers have since started to focus on other areas of concern more fundamental to the structure of the stock market. They plan to home in on a practice known as “payment for order flow,” in which Citadel Securities and other trading firms pay online brokerages such as Robinhood to execute their customers’ trades.

Proponents say the practice has saved investors billions of dollars in costs they would have incurred from prices available on stock exchanges. Citadel Securities claims it provided investors with $3 billion in “price improvement” last year. But critics, including committee Democrats, have doubts about whether it really has served investors and whether there is sufficient data to show that it has lowered costs. They cite potential conflicts of interest between brokers relying on the payments for revenue and the big trading firms seeking to maximize profits on the orders they execute, often internally and without using public exchanges.

Last year, Robinhood agreed to pay $65 million to resolve SEC charges that it didn’t disclose the revenue it received from selling its customers’ orders to trading firms to execute at high fees, depriving those investors of $34 million. The brokerage did not admit or deny guilt, according to the SEC.

Former Sen. Carl Levin (D-Mich.), who led the last congressional review of the issue, described it last month as a “hidden, private tax on savings” in a Financial Times op-ed calling for the arrangements to be banned. Griffin last testified before Congress in 2014, when the book “Flash Boys” by best-selling author Michael Lewis drew public attention to high-frequency trading practices by Wall Street firms like Citadel.

Payment for order flow, which is legal and regulated by the SEC, has helped fuel the rise of zero-commission stock trading offered by Robinhood, which received $687 million in payments last year, and by other brokers. Citadel Securities also executes trades on behalf of trading platforms that it doesn’t pay. Its scale is massive — Citadel Securities says it executes 47 percent of all U.S.-listed retail stock trades.

In his prepared written testimony for Thursday’s hearing, Griffin attributed payment for order flow as a force in reducing the costs of trading and argued that it’s a key reason why retail investors are able to trade for free or with low commissions. He said Citadel Securities “stepped up” during the trading frenzy at the end of January and that it was the only major market maker firm to provide “continuous liquidity every minute of every trading day.”

“On Wednesday, Jan. 27, we executed 7.4 billion shares on behalf of retail investors,” Griffin said. “To put this into perspective, on that day Citadel Securities executed more shares for retail investors than the average daily volume of the entire U.S. equities market in 2019.”

But similar to concerns with tech companies that offer free services in exchange for access to their users’ data, the question for policymakers is whether consumers understand the true costs of their commission-free trades supported by the kind of business relationship that Robinhood and Citadel Securities have.

“If you’re not paying Robinhood for the service it provides, it’s because you’re not the consumer, you’re the product,” said Rep. Brad Sherman (D-Calif.), who chairs the House subcommittee focused on the stock market.

Republicans, including some who received campaign funds from Griffin, will likely defend the practice at Thursday’s hearing. Barr, a senior GOP member of the committee, said payment for order flow has helped facilitate low-cost investment options.

“We shouldn’t rush to overregulate the free market and potentially cut off access to the capital markets for many,” he told POLITICO. “Rather we should evaluate what is best for retail investors with regard to current market conditions and available technology.”