Joe Biden’s vote count in 2020 has been so record-breakingly enormous it’s easy to forget that Donald Trump has broken a record of his own.

He’s the first presidential loser (and indeed only the second person ever, after Biden) to take 70m votes in a US election – a figure that comfortably beats his own 2016 result.

Some see this as confirmation that Trump’s divisive ideologies reflect the views of many people – in other words, Trumpism is Americanism.

Lord Simon Woolley, founder of Operation Black Vote, told HuffPost UK in the aftermath of the result that “Black people around the world will sleep easier tonight.”

But not everyone shares his optimism.

US academic Eddie Glaude told NBC that Trump is the “manifestation of the ugliness that’s inside of us”.

“America was built on white supremacy,” she said. “Trump started his political life by spreading disinformation relating to the citizenship of Obama. He relied heavily on white cisgendered men that agreed the with notion that they are the the only people who are worthy of leadership in a context of constant Black resistance against racial patriarchy.

“Trump used the ‘white fear’ invoked by the Black Lives Matter uprisings to campaign to white women and his support rose within that group. This is a year where the American public have discussed the problems posed by ‘Karens’ who call the police on Black people living their everyday life and it would seem that the vote’s outcome was contingent upon this.”

Sure enough, a remarkable 55% of the nation’s white women aided Trump’s attempt at returning for a second presidential term – even though Trump had been accused of rape and had been caught on tape making sexist comments. 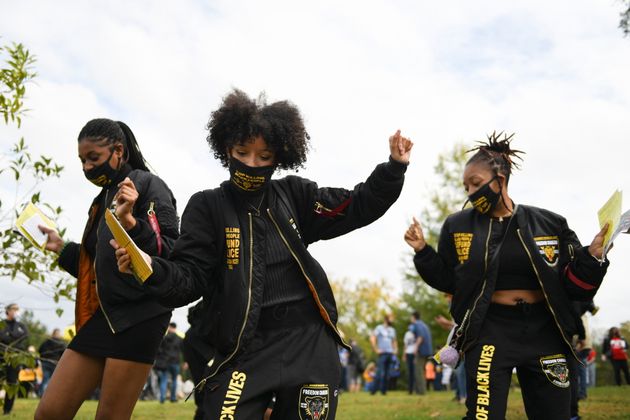 During the 2020 election cycle, Nkonde worked on a campaign to interrupt a disinformation campaign advanced by a Black group called the American Descendants of Slaves (ADOS), who were dissuading Black voters from taking part.

Trump made similar attempts to silence Black voices in 2016: Channel 4 News revealed that his campaign had targeted millions of Black Americans through voter suppression tactics and disinformation to encourage them to “stay home on election day”.

Nkonde said: “The voting booth is the only place where Black and white people are equal under one person, one vote. Even the most liberal of whites are uncomfortable with true racial equality because it challenges the notions of white supremacy that all of us hold true.”

This side of the Atlantic, British campaigners see Trump’s loss as the epic toppling of a deranged dictator, a whopping win in the global fight against hate and – in light of the two countries’ “special relationship” – an indication that threats posed to marginalised groups by the British government, far-right figures and parts of the media may yet be squashed.

After Johnson replaced Theresa May as PM last summer, Trump congratulated him and gave him the bizarre moniker “Britain Trump”. It’s an unshakeable comparison and, while the pair have enjoyed a friendly relationship, the general public have drawn parallels between the two men – from their policies to their previous use of racist language.

Just days ago, Johnson was called “cowardly” for refusing to comment on Trump’s false claim that he has won the US presidential election.

But just as the president received an overwhelmingly high number of votes, Johnson was voted in as PM by millions of Brits last December – after he had called Black people racial slurs, implying they have lower IQs and saying Muslim women wearing burkas “look like letterboxes”, to name just a few jibes.

The PM presides over a Conservative government that enacts policies which systemically disadvantage Black, Asian and minority ethnic people – from immigration and housing to healthcare and education.

It comes as the Covid-19 pandemic continues to disproportionately affect BAME people. The government is accused of failing to adequately protect these groups.

There is of course no UK election scheduled until 2024. But some believe Trump’s defeat is a sign that Johnson’s brand of politics is falling out of favour.

Hi @BorisJohnson… You're next.

Publisher Sharmaine Lovegrove wrote: “For me, the most profound thing re: Trump’s loss will be the demise of the emboldened fascist government in the UK. They were prepared to take food from kids, deport nationals, ban immigration & destroy livelihoods w. a no-deal Brexit that’d decimate society. Now they’re alone.”

Indeed, after Trump lost, the PM U-turned on the government’s decision not to feed hungry schoolchildren during Christmas. 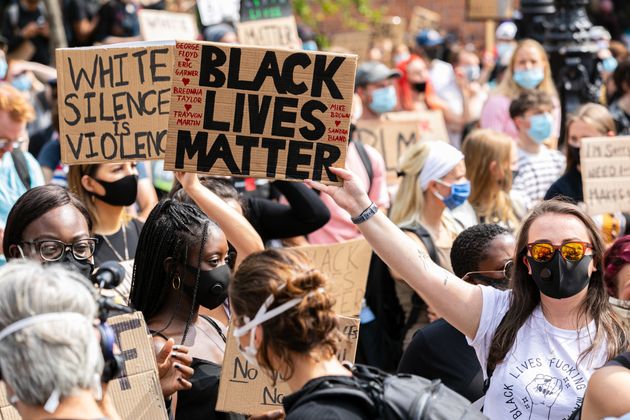 But Black Lives Matter UK say Johnson and Trump are one and the same, warning that the UK cannot be complacent.

“We, like all anti-racists around the world, celebrate the end of the Trump presidency. This has only happened due to the heroic efforts of thousands of grassroots campaigns, many of which were led by people of colour,” spokesperson Kojo Kyerewaa told HuffPost UK.

“[But] an unprecedented 70m US citizens voted for four more years of barely restrained white supremacy. While the UK media occasionally at times challenged the racism, lies and assaults on democratic institutions from the Trump administration, it has failed to do the same for the UK Johnson government.

“Johnson and Trump are part of the same political project. Johnson, like Trump, plans the UK to be a more aggressive hostile environment towards migrants. Johnson like Trump is attacking anti-racist ideas like critical race theory and banning terms like white privilege in schools. Johnson like Trump has suspended parliament to bully opposition into submission.“

Kyerewaa added: “The UK media was virtually silent when Kemi Badenoch falsely accused Reni Eddo-Lodge of promoting ‘segregation’. The USA may have turned a page, but in the UK we have four more years of this to come. We will continue to organise, resist and build coalitions to liberate all oppressed by this racist and violent political project.” 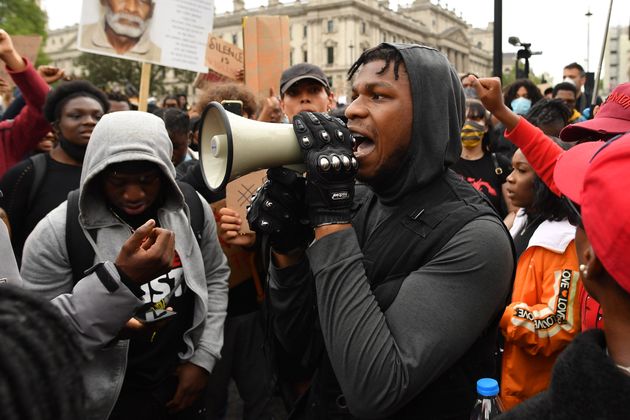 Zita Holbourne, co-founder of Black trade union BARAC UK, said the organisation’s very existence is indicative of how endemic racism is within Britain.

“We have seen countless reports in the UK to tell us that racism exists but those of us on the receiving end already know this – we don’t need more reports to confirm what we already know,” she said. “What we need is action – changes in policies, in practices and in cultures. Politicians have a responsibility to take action to end racism, to prevent racism but also to create an equal, inclusive and fair society.

“In the summer, following the Black Lives Matter protests, Boris Johnson announced an inquiry into racial inequalities saying that it is aimed at ending ‘the sense of victimisation’ felt by Black, Asian and minority ethnic people. This makes it sound like the problem is with our feelings about racism rather than the actual racism itself.”

Stand Up To Racism (SUTR) staged an anti-Trump protest outside the US embassy in London on Wednesday alongside other anti-racism groups including All Black Lives UK.

Aima, of All Black Lives, told HuffPost UK: “As many of us know, American politics affects the whole world. Their relationship with Britain is extremely important, and a lot of things that happen over in America mirror in this country too.

“I feel like watching this election is a repeat of the last UK general election, [although] the American election had a more positive outcome than the British one. We all know the two leaders that people compare a lot in the modern ages are Trump and Boris. This is because they both have been very racist, Islamophobic and sexist. This is the same anxiety I had for our general election.

“I really do not believe what is currently happening with the US election will happen with the next general election here, I feel like the people in this country still glorify the ignorance of the man who runs the country.” 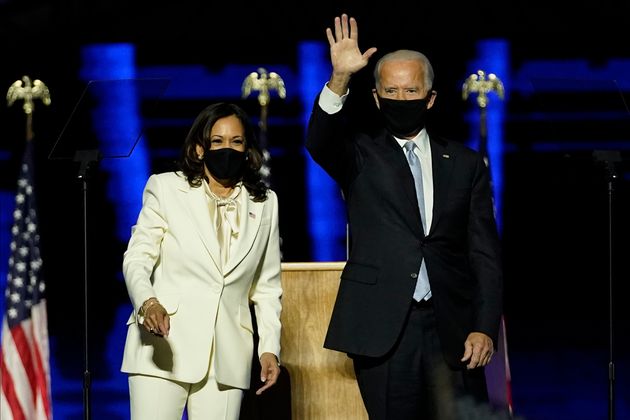 The 18-year-old added: “The UK media has to stop attacking Trump but ignoring what Boris does. It is exactly like how they focus on the problem of racism in America but not here.”

Dr Kehinde Andrews echoed this. “It’s easy for the media here to paint Trump as the bad guy, the cartoonish racist that would never thrive here,” she said. “It helps them to ignore the problems of the UK which are just as deep and even harder to address.

“I have not a single shred of optimism in the UK political system because it is worse than the US. But the recent Black Lives Matter protests give me hope that [people] are waking up to the reality.”

“As much as it seems insane to say it – with Trump being so awful – the situation is actually worse here. The US system has checks and balances. One of the reasons he did a lot less damage than he could have done was the midterm election, where the Democrats won the House of Representations and could therefore block his legislation.”

Andrews continued: “In the UK we have five-year parliaments where if a government gets a majority in an election they can basically do whatever they want – as we are about to find out with Brexit. Johnson’s government is just as extremist, populist and, yes, racist – and can do as they please.”

Journalist Nadine Batchelor-Hunt tweeted: “The British media are suddenly going to have to start taking Boris Johnson’s racism seriously. Pity they didn’t do it for the British election when people of colour begged them to Instead we were shut down, gaslighted, and ridiculed.”

The British government is scrambling to appear less racist because suddenly that’s not such a good look any more. I see you 👀 #ByeByeTrump

What happens next remains to be seen. As of Monday morning, the UK PM – like Trump – has yet to speak to US president-elect Biden.