Australia endures hottest spring ever, with average temperatures more than 2C above average

How Stacey Abrams and her band of believers turned Georgia blue

As Joe Biden opened a narrow lead in Georgia on Thursday, Democrats across the country couldn’t quite believe it was happening.

But Stacey Abrams and a network of activists had been planning for the moment for nearly a decade.

The people leading the effort to flip the state — a group composed of Black female elected officials, voting rights advocates and community organizers — understood why Democrats had often fallen short in the South the past decade. Topping the list of reasons: the region’s long-running conservative bent, voter suppression tactics by the right and the failure by Democrats to mount a sustained voter outreach program.

But something changed in 2018. Abrams’ razor-thin loss in Georgia’s gubernatorial election made clear to her and other liberals in the state that demographic shifts in the suburbs had reached a tipping point. Their argument to the national party was simple: Democrats could win more races by expanding their coalition to include disengaged voters of color, as opposed to continuing the focus on persuading undecided, moderate, often white voters.

Abrams had come close with the strategy: Her campaign and its allies registered more than 200,000 new voters in the run-up to the 2018 election. When Fair Fight and the New Georgia Project, two organizations founded by Abrams, tried again this year, they quadrupled their gains, registering more than 800,000 new voters.

This vast new coalition of first-time voters, many young and of color, put Joe Biden over the top in the state by more than 7,000 votes as of Saturday. The expected win in Georgia would bring his Electoral College total to over 300 votes.

Abrams’ strategy of expanding an existing coalition has not only proven successful in Georgia, but potentially offered a blueprint for how Democrats can win elections in other red states drifting left. It’s a defining story line of the 2020 election and, in all likelihood, many cycles to come. 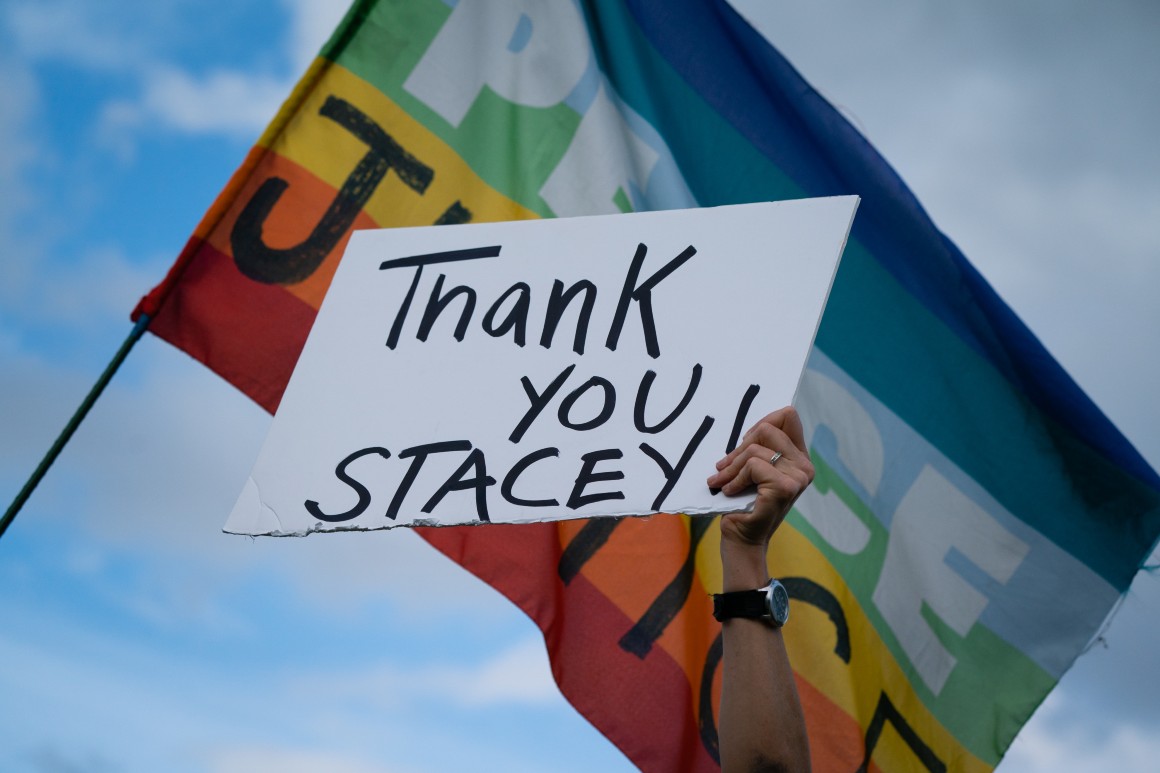 A supporter of Stacey Abrams holds a sign thanking her during a celebration of Democratic nominee Joe Biden’s projected presidential win at Freedom Park on Nov. 7, 2020 in Atlanta, Georgia | Elijah Nouvelage/Getty Images

“When you’re trying to not only harness demographic changes but leverage low-propensity voters, you cannot simply hope that they’ll hear the message. You have to treat them as persuasion voters,” Abrams told POLITICO shortly before Election Day. “Only the message is not trying to persuade them to share Democratic values. Your message is to persuade them that voting can actually yield change.”

Abrams kick-started her drive in 2013 when she founded the New Georgia Project while serving in the Georgia House of Representatives. The initiative aimed to reach out to minority and young voters, two groups often left out of the political process, but which represented the best shot at delivering the state for Democrats.

The push by Democrats to flip Georgia continued in the ensuing years — in 2014, a pair of Democratic political scions, Jason Carter and Michelle Nunn, made failed bids for governor and Senate, respectively. Then, in a late-2019 memo to Democratic strategists and presidential candidates, Abrams formalized her argument. The key to winning Georgia, she wrote, was engaging new voters, establishing strongholds in Georgia’s demographically changing suburbs and protecting voters’ access to the polls.

“Any[thing] less than a full investment in Georgia would amount to strategic malpractice,” she wrote.

Now, as Georgia readies itself for a January runoff election with control of the Senate on the line, the infrastructure built and outlined by this group has proven invaluable. Though it’s far from guaranteed that even one Democrat will win the Senate — runoff elections typically see lower voter turnout among Democrats — both candidates, Raphael Warnock and Jon Ossoff, have praised Abrams for her work in turning out voters. They recognized that without her strategy their electoral success might not be possible.

Those in Abrams’ circle hope to expand it across the South.

Georgia’s rapidly changing demographics in the Atlanta suburbs made the state’s shift to blue a closer reality. Enthusiasm among Black, Latino and Asian-American voters, along with a larger share of white voters leaning Democratic, had the makings of a potent coalition. And with anti-Trump sentiment running high across the country, 2020 represented a prime opportunity to turn frustration into electoral success.

“We’ve been building for this moment for some time,” said Georgia Democratic Party Chair Nikema Williams, who was elected to succeed the late John Lewis in Congress on Tuesday. “And then this year came the perfect opportunity,” she said, with racial protests, the Covid-19 pandemic, and excitement about Biden and Kamala Harris motivating voters.

The success also stemmed one of the most crucial, consistent voting blocs in Georgia and across the country: Black women. Exit polls show that 91 percent of Black women voted for Biden. They were driven by disdain for Trump as well as the representation they see in Harris, a woman of both Jamaican and Indian heritage, atop the Democratic ticket.

Still, Abrams’ strategy was once rebuffed by the party establishment. Jessica Byrd, a political strategist and lead organizer with the Movement for Black Lives, helped steer Abrams’ 2018 bid as deputy campaign manager. She said the campaign team warned in 2018 that their plan would succeed only if the voters they needed most — largely first-time, young and Black — were not disenfranchised.

But the party was unwilling to provide the voter protection resources the campaign was seeking. Byrd recalled Democrats characterizing Abrams’ campaign strategy as “just crazy.”

Byrd said that Biden’s success this year — which included a major effort by national Democrats to counter voter suppression, by arming voters with information about how to request provisional ballots, and filing litigation against Republicans — validated Abrams’ strategy. Abrams lacked that muscle in 2018.

“People largely kind of ignored that it would be the rigging of that election that would prevent her from losing,” Byrd explained, citing then Secretary of State Brian Kemp’s removal of more than 100,000 voters from rolls that drew widespread claims of voter suppression and contributed to Abrams’ razor-thin loss. “People imagined it was because she was a Black woman, because she was too progressive, because she didn’t have enough money. No, that’s not what it was.”

Two years later, the message Abrams and others were pushing broke through. In the final weeks leading up to Election Day, Biden, Harris and their campaign’s top surrogate, Barack Obama, all made trips to Georgia, a sign of their growing confidence they could finally win the state.

“We’ve been aggressive since 2018. We had record numbers here. Instead of hoping that the national campaigns would see these numbers, we’ve been aggressive and assiduous in sharing the data but also in pursuing investment,” Abrams said, citing the record increase in turnout among Black, Latino and Asian-American voters.

“We have been relentless in not only championing Georgia as a state for investment but really being able to show the utility of being here.”

Ryan Lizza contributed to this report.

shareSharenocloseShare pagelinkCopy linkAbout sharingimage copyrightGetty ImagesNew rules for pubs are "a huge slap in the face" for the sector, said the boss of Wales'...
Read more
Asia-Africa

Dignified sanitation is a basic human need that does not end with a toilet.
Read more
Asia-Africa

shareSharenocloseShare pagelinkCopy linkAbout sharingimage copyrightGetty ImagesNew rules for pubs are "a huge slap in the face" for the sector, said the boss of Wales'...
Read more
Asia-Africa

Dignified sanitation is a basic human need that does not end with a toilet.
Read more
Asia-Africa

Australia endures hottest spring ever, with average temperatures more than 2C above average