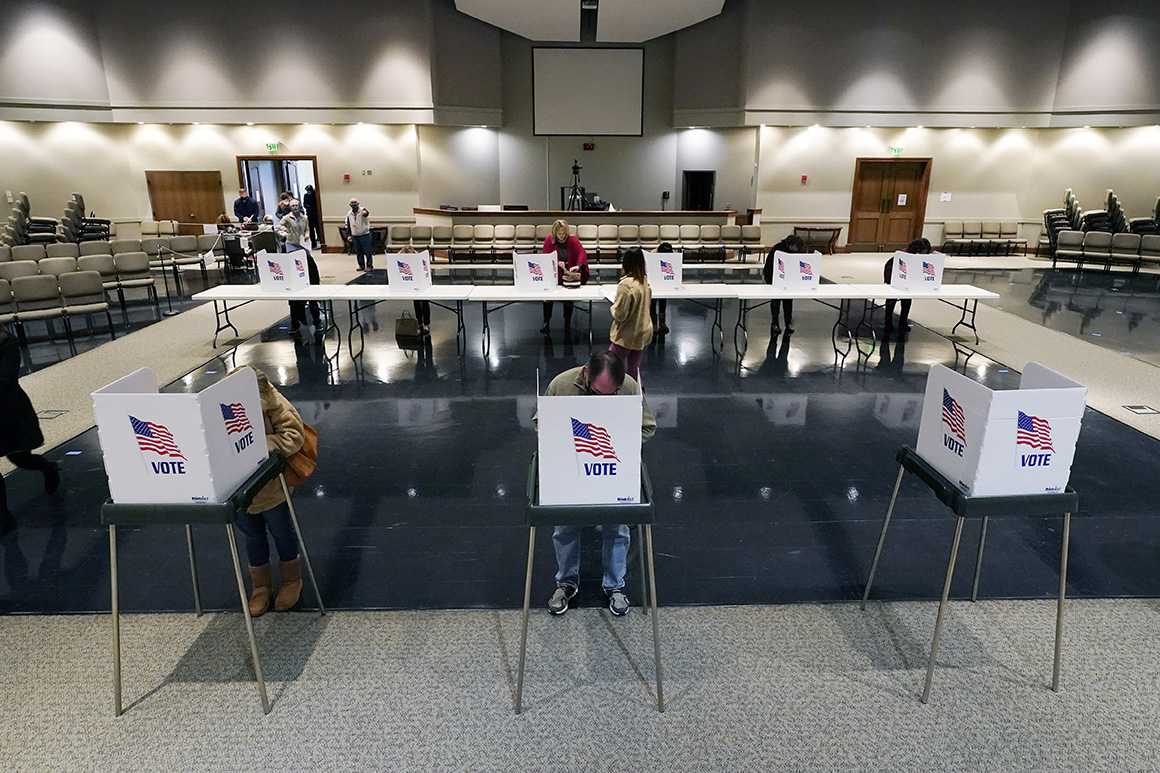 Privacy voting booths are set up six-feet away from each other in the worship center of the Highland Colony Baptist Church in Ridgeland, Miss., on Nov. 3, 2020. | Rogelio V. Solis/AP Photo

A federal judge in Washington on Friday formally referred a Minnesota lawyer for potential discipline over a lawsuit filed in December seeking to overturn President Joe Biden’s wins in at least five battleground states.

U.S. District Court Judge James Boasberg said the suit was so flimsy and legally flawed that it could merit the attorney who filed it, Erick Kaardal of Minneapolis, facing some sort of punishment from the court.

“The relief requested in this lawsuit is staggering: to invalidate the election and prevent the electoral votes from being counted. When any counsel seeks to target processes at the heart of our democracy, the Committee may well conclude that they are required to act with far more diligence and good faith than existed here,” wrote Boasberg, an appointee of President Barack Obama.

Boasberg said Kaardal’s explanations for his actions were inadequate, so a referral to a court attorney-conduct panel was warranted.

“As he has not sufficiently allayed the Court’s concerns regarding potential bad faith, it will refer the matter to the Committee via separate letter so that it may determine whether discipline is appropriate,” the judge said.

The suit, Wisconsin Voters Alliance v. Pence, alleged that the election procedures in Arizona, Georgia, Michigan, Pennsylvania and Wisconsin were unconstitutional because legislatures did not have the final say in certifying the victor in those states and in appointing presidential electors.

Boasberg said the case suffered from “numerous shortcomings,” including a protracted recitation of fraud allegations while disclaiming any intention to challenge that same fraud.

“Plaintiffs spend scores of pages cataloguing every conceivable discrepancy or irregularity in the 2020 vote in the five relevant states, already debunked or not, most of which they nonetheless describe as a species of fraud,” the judge wrote. “The only reason the Court can see for the Complaint to spend 70+ pages on irrelevant allegations of fraud, not one instance of which persuaded any court in any state to question the election’s outcome, is political grandstanding.”

Boasberg also said the timing of the suit, filed Dec. 22, was deeply suspicious.

“This claim … could have been brought any time over the past years (or, in some cases, decades). It is fanciful that counsel needed to worry whether states would in fact take the allegedly unlawful action of certifying their election results without the state legislature’s involvement, as state statutes required them to do just that,” the judge added. “To wait as counsel did smacks once again of political gamesmanship.”

Kaardal, a past secretary/treasurer of the Minnesota Republican Party, is a lawyer at the Minneapolis firm of Mohrman, Kaardal & Erickson. When filing the suit last December, he said he was acting as special counsel for the Amistad Project of the Thomas More Society, a socially-conservative non-profit legal organization based in Chicago.

Kaardal and Justin Flint, a Washington lawyer representing Kaardal in the discipline fight, did not immediately respond to messages seeking comment on Boasberg’s ruling.

Other efforts are underway to discipline or punish attorneys who filed election-related litigation that critics considered ill-founded.

Earlier this month, the State Bar of Georgia issued a 1677-page grievance against a renowned trial lawyer in the state, Lin Wood. The complaint cited as “frivolous” a series of suits Wood filed challenging the 2020 election results in Georgia and elsewhere. The filing came after the bar urged Wood to seek mental health treatment.

Wood has insisted the suits and bizarre allegations he leveled publicly at Chief Justice John Roberts were justified. Wood said he plans to fight the effort to discipline him.

A judge in Detroit is also considering a motion to impose sanctions on Wood and other lawyers there who filed a lawsuit challenging Biden’s victory in that state. The City of Detroit has urged the judge to force the attorneys who filed the case to pay the legal fees of the opposing parties and to refer them for potential disbarment.