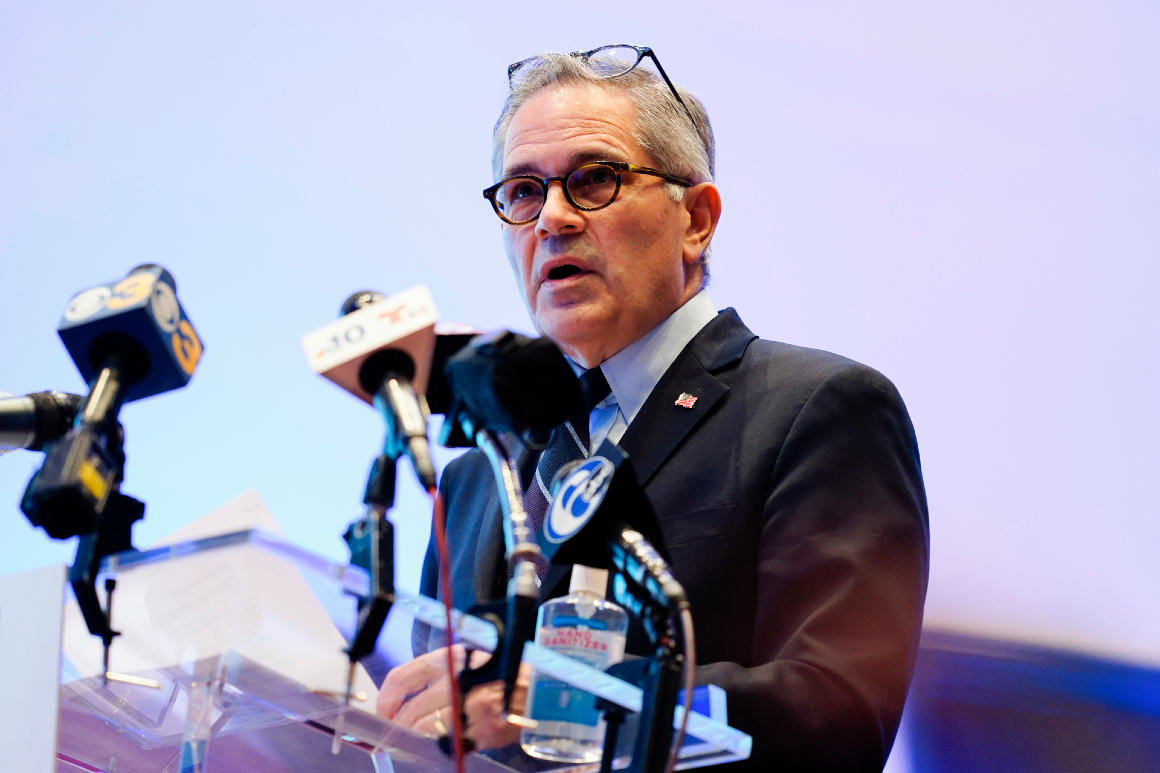 Philadelphia District Attorney Larry Krasner blames larger societal forces for the spike in homicides — which are up 29 percent compared with this time in 2020. | AP Photo/Matt Rourke

PHILADELPHIA — Larry Krasner’s election in 2017 was a triumph for progressives nationwide: The man who had sued cops 75 times, represented Black Lives Matter, promised to end cash bail — and was widely seen as the most liberal district attorney candidate in the country — won.

Four years later, Philadelphia’s top prosecutor — and one of the leading figures of the country’s criminal justice reform movement — is under siege.

Homicides are skyrocketing in the city, and local officials are grumbling. A former assistant district attorney backed by the local police union is challenging Krasner in the May primary. And in recent weeks, the Philadelphia Democratic Party broke with years of tradition and declined to endorse the incumbent.

The primary battle is a test of whether the left can maintain its successful campaign electing progressive district attorneys amid an uptick in murders in cities around the country. If Krasner wins, it could signal the arrival of a new era, one in which the public doesn’t recoil from liberal criminal justice policy — even when crime statistics go up. If he fails, it would be a jolt for politically beleaguered police unions, and a sudden halt to what has been a steady shift leftward in urban DA races.

“His reelection means everything,” said Shaun King, a civil rights advocate and former surrogate for Bernie Sanders’ presidential campaign. “We always knew that Larry, a lifelong civil rights attorney, would come in and change the system from the inside out, and that doing so would make him a major target.”

Krasner isn’t the only big-city progressive prosecutor meeting fierce resistance. In California, both San Francisco District Attorney Chesa Boudin and Los Angeles District Attorney George Gascón are facing recall efforts. Opponents of the left-wing DAs have accused them of letting criminals loose on the streets and turning a blind eye to victims — all criticisms lobbed at Krasner, too.

Krasner has framed his reelection campaign as a choice between the future and the past, “a past that echoes with names like [Frank] Rizzo,” Philly’s former tough-on-crime, racially polarizing mayor, as he put it at a recent candidates forum. He says that he delivered on his campaign promises by lowering the jail population, exonerating the innocent and reducing the amount of time people are on probation and parole.

He has taken a tack against his Democratic challenger — ex-homicide prosecutor Carlos Vega, who was among the group of employees he fired when he became DA — that once might have been unthinkable. Krasner is using the local police union as a foil, and reminding voters that Vega is endorsed by the local chapter of the Fraternal Order of Police, whose national union endorsed former President Donald Trump.

As for the spike in homicides — they are up 29 percent compared with this time in 2020, which was the most violent year in three decades — Krasner blames larger societal forces.

“What has happened, and essentially every criminologist agrees on this, is that the pandemic, closing of society and closing of so many different aspects of what protects and surrounds especially young men have disappeared,” Krasner said in an interview. “So in every single city, you have the elimination of high schoolers being in classrooms at least for periods of time, summer camp, summer job programs, open swimming pools, open recreation centers, organized sports in school, organized sports out of school and after-school programs.”

In a demonstration of how much the Democratic Party has moved left on criminal justice issues, Vega is not actually campaigning as a tough-on-crime politician. He talks about diversionary programs and prohibiting cash bail for low-level offenders, and his website promises to deliver “real progressive reform.” His pitch in his launch video is that “we don’t have to choose between safety and reform,” and he places the wave of murders squarely on Krasner’s shoulders.

Murders rose last year in cities around the country, both big and small, suggesting that local explanations alone cannot explain the phenomenon. Asked whether it’s fair to blame Krasner amid a national trend, Vega said that “the issue is what is happening to our community, our city — he cannot and I cannot address all the ills happening across the nation.”

But Krasner’s approach of declining to accept any blame whatsoever has rubbed some voters and party officials the wrong way.

The politically influential Democratic ward leaders who declined to endorse Krasner were frustrated that “there’s an epidemic of gun violence here, everybody’s been touched by this, and Krasner takes no responsibility,” said a person familiar with their meeting with the district attorney.

At times, the election has gotten personal. Vega, who is Latino, called Krasner’s likening him to Trump “really rich … when this is coming from a person who’s white, elite, from an Ivy League school.” Krasner said Vega never championed reform while in the DA’s office, and that he “is doing what all kinds of people do during election cycles — which is they will say anything, they read the polls first.”

Krasner’s campaign said he brought in more than $420,000 during the first three months of the year, while Vega’s team said he reaped almost $340,000. In 2020, Vega kept pace with Krasner’s fundraising.

When Krasner first ran for office, a super PAC mostly funded by liberal billionaire George Soros spent nearly $1.7 million backing him. Some political insiders in Philadelphia said that whether Soros decides to get involved again could have a big impact on the race.

Others think Krasner is unlikely to be ousted because he is the incumbent, and primaries often attract more progressive voters than general elections. In this deep-blue city, the district attorney is effectively determined in the primary. There have been no public polls released in the race.

Krasner has expressed confidence in his prospects in the May 18 primary, pointing to the reelection of other liberal prosecutors around the country such as Cook County State’s Attorney Kim Foxx and Baltimore State’s Attorney Marilyn Mosby. He doesn’t fear a 1990s revival of the tough-on-crime ethos due to the recent gun violence.

“I do not believe that people who have had the wisdom to elect progressive prosecutors all over the country, and increasingly, all of a sudden are going to get the stupids,” said Krasner, “and decide that a phenomenon that is affecting essentially every major city — and is affecting traditional prosecutors’ cities and Republican cities just as much as progressive prosecutors’ cities and Democratic cities — I do not believe all of a sudden they’re going to get that stupid and go for this kind of dumb scapegoating.”

John McNesby, president of the local chapter of the Fraternal Order of Police, sees a different mood in the city.

“Two years ago, it was just the FOP that was screaming and yelling about it. Now it’s every part of the city, every neighborhood and every background,” he said. “People are starting to resonate that in order for their children and their family members to be safe, they need change in the DA’s office.”

If Krasner lost, he said, it would mean that “we have some law and order back in the city — morale with the police is at an all-time low.”

One longtime observer of Philadelphia politics said that if Krasner is unsuccessful, though, it might be the result of old-fashioned politics and not a larger phenomenon.

“If Larry lost, I think it would be a personal loss,” said Larry Ceisler, a public relations executive based in Philadelphia. “I don’t think it would be because the electorate soured on criminal justice reform. And it’s just because Larry is not a politician. He doesn’t try to be a politician. I mean, he really doesn’t go out and try to sell what he does.”