Game over: GameStop CEO heading for the exits 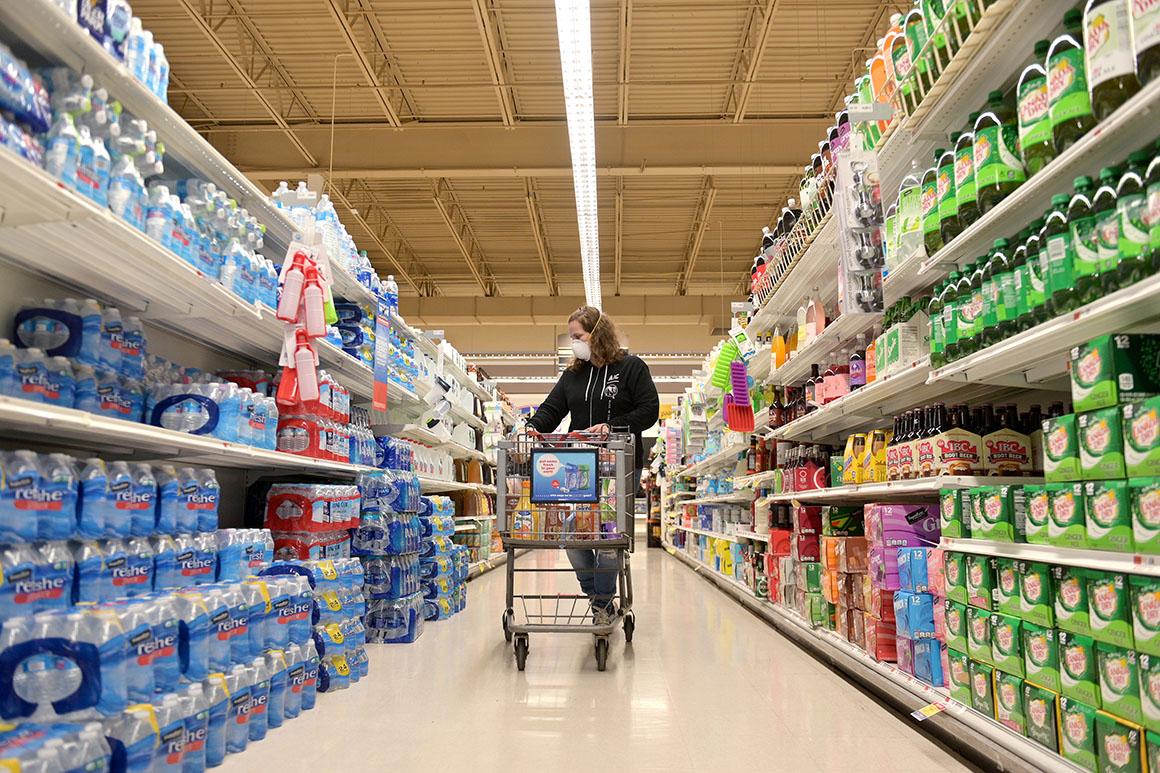 Seven months into the school year, millions of low-income families are still waiting for billions of dollars in federal food aid that was supposed to compensate them for school meals that were missed during remote learning.

The Biden administration recently accelerated the rollout, but the program remains mired in bureaucracy, as states struggle with numerous logistical issues, from tracking student eligibility and addresses to getting approval from USDA to provide aid. Nearly half of states still haven’t sent any of the money out, even as child hunger rates remain near record highs.

Congress first created the $2 billion-a-month program called Pandemic-EBT, or P-EBT, last spring during the early days of the pandemic when schools were shuttered to give households a debit card to buy groceries. Lawmakers extended it for the whole school year in September as families continued to grapple with school disruption.

The slow rollout shows the pitfalls of standing up new bureaucratic channels during an emergency. It also could be exacerbating alarmingly high rates of child hunger. One in six households with children is reporting they do not have enough to eat, a rate much higher than even in the depths of the Great Recession. Researchers found the first round of the aid that went out last year alleviated hunger for millions of children.

It’s a sharp contrast to other forms of federal aid that have made their way to consumers and businesses rapidly during the crisis. Last year, the federal government was able to begin the Paycheck Protection Program and get hundreds of billions in loans out to businesses in a matter of weeks. Stimulus checks, which can be directly deposited into accounts, have also gone out quickly to millions.

“Moral of the story from the pandemic is: Fast and simple,” said Elaine Waxman, a senior fellow at the Urban Institute, who tracks food insecurity closely. “That’s what we needed. When we had success, it was fast and simple.”

The USDA, for its part, contends that the current administration has already simplified the process to make it easier for states to get the money out. They issued long-delayed guidance within days of President Joe Biden’s inauguration.

“The Biden administration has taken a significant number of steps in a relatively short period of time,” Agriculture Secretary Tom Vilsack said in an interview last month, when asked about the delay.

The secretary said he is aggressively reaching out to state officials about the aid. “I have been calling governors of every state and territory, including those yet to apply, to encourage them to do so. We’re leaving no stone unturned,” he said in a statement on Wednesday.

Vilsack noted that the administration has expanded nutrition assistance in several ways since January, including by overseeing a 15 percent across-the-board increase in food stamp benefits Congress authorized in December.

USDA just last week reversed Trump administration policy to open up $1 billion more per month in emergency Supplemental Nutrition Assistance Program payments to millions of the lowest-income households who had previously seen no increase in aid during the crisis.

P-EBT, which reaches a lot of families who don’t qualify for SNAP, got off to a very slow start under the Trump administration and was already running behind when Biden took office.

The current administration has sped up the process and increased the benefits each household is owed. But large swaths of the country are still behind. Many states have been slow to submit distribution plans to USDA, which must approve them first.

The department has approved 30 states as well as Puerto Rico and Washington, D.C., to distribute the aid to school-aged kids. Some of the most populous states like California and New York have yet to be approved, leaving millions of low-income families awaiting payments with no word on when they might receive them.

Just six states and District of Columbia have been approved to get P-EBT benefits to kids under age 6, who became eligible for the program in September.

P-EBT was conceived by Congress as a lifeline for low-income families in the beginning of the crisis, when no one had any idea how long schools would be closed, but there was already a lot of concern about how to feed the nearly 30 million kids who usually eat least one meal at school each day.

Parents of qualifying children would receive around $240 to $450 per child per month on an EBT card, which functions like a debit card that can only be used to buy groceries.

In the spring, the program, even though it was brand new, was relatively simple to administer. Virtually all schools were closed, so if a child qualified for free or reduced-price meals, the family qualified for P-EBT. The schools had addresses on file for each student. They shared the data with state agencies that usually dole out SNAP benefits.

It became much more complicated when some schools started reopening in August and September.

The Trump administration spent months weighing how best to ensure the aid only went to kids who were in a hybrid or all-virtual school setup. This turned out to be a bureaucratic nightmare.

School schedules are locally controlled, and many districts are doing in-person and virtual or hybrid schedules, or all three, which means tracking eligibility would have to be done on an individual student basis, something states don’t have the capacity to do.

In some cases, education leaders were having to update massive Excel spreadsheets manually to get them in formats that other state agencies could use.

The Biden administration made it much simpler for states to implement for school-aged children and also moved quickly to figure out how states can expand the program to reach low-income, non-school age kids under the age of 6, who didn’t qualify until Congress expanded eligibility in September as a way to help with childcare closures.

California, one of the biggest states in terms of scale, has not yet been approved by USDA. The state has submitted a plan. New York, another very large state by population, has not been approved, either. The New York State Office of Temporary and Disability Assistance did not respond to a press inquiry about whether it had submitted a plan.

Other large states have also been slow to get rolling. Texas had its plan approved on March 22. It owes families benefits spanning all the way back to August and is planning to begin issuing benefits in late May. Low-income households in Texas are owed $1.9 billion in benefits for the school year that ends in June. In Florida, these families are owed $1.2 billion for the year.

The program serves many children in households that might make a little bit too much to qualify for other forms of assistance, such as SNAP, which is known to many as food stamps, even as Washington has increased SNAP spending by about 50 percent.

The benefit was a welcome surprise for these families. Before the pandemic, Jill, a single mom of two in Arkansas who works two part-time jobs, who asked that only her first name be used, didn’t qualify for SNAP. “I was a couple of hundred dollars over the income limit,” she said.

But she was heartened to receive a P-EBT card in the mail last summer without having to apply for the program because her school district is low-income.

“It helped tremendously,” she said. “It would be so helpful if they did that again.” Jill’s children’s school is now on a hybrid schedule, and her kids attend in-person four days a week. Benefits to help buy groceries would be particularly helpful, she said, because her son has Sensory Processing Disorder and has aversions to certain food textures and shapes and therefore won’t eat a lot of the food he’s served at school.

She’s been inquiring about the status of the program. She tweeted at her state senator in December: “Any plans for P-EBT programs for kids during the Christmas break? The struggle is real for us single parents right now.”

A spokesperson for the state’s Education Department confirmed a plan is in the works, but said it’s too soon to know how many students would be eligible. Currently, about 81 percent of students in the state are learning on-site, either full-time in person, or on a hybrid schedule, the spokesperson said.

Even in states that have been approved by USDA, there have been further delays in getting the money into the hands of parents. Tennessee’s plan was approved by USDA in late January and families are still waiting for benefits in the first week in April.

“We needed those benefits months ago,” said Tiffany Flennoy-Corder, a mother of six who lives in Nashville, where public schools were closed until October of last year. Nearly half of students in the district are still learning virtually.

Flennoy-Corder, who’s a full-time student and fledgling business owner, has been managing virtual instruction for her four school-aged kids, who range from fifth to 10th grade, for more than a year now. Normally, her kids would eat breakfast and lunch at school, which helped stretch the family’s SNAP benefits.

After the pandemic hit, Flennoy-Corder began feeding all of them — including her 18-month-old, 4-year-old and her 4-year-old nephew she watches during the day — every meal at home. Keeping her family fed during the pandemic has been a herculean feat. At times, it meant skipping meals herself. She’s lost 36 pounds since March from rationing.

When the first round of P-EBT was rolled out last spring and summer, it was a huge help: Flennoy got an EBT card in the mail for all four of her school-aged kids with $240 in benefits each.

Since then, however, she hasn’t received anything because her state was slow to complete the process with USDA.

In early March, the Tennessee Department of Human Services tweeted that it would be mailing P-EBT cards “soon” so parents should make sure their addresses were up to date. That timeline was already nearly a month behind schedule: The state had told USDA it would start getting benefits out by Feb. 20.

“Is there an ETA on ‘soon’? Please advise,” Flennoy-Corder replied on Twitter. The agency responded that cards would be mailed later that month. The cards still haven’t showed up as of this week.

“I don’t think any of them realize how mentally and emotionally devastating it is to not know how you are going to feed your kids or to know that what you can feed them is not enough,” Flennoy said. “It’s exhausting.”

Advocates in Tennessee have been frustrated by how the state has administered the program. Last spring, state officials decided that there would be an application process for getting benefits — a barrier that meant at least 100,000 kids were left out of the program because they didn’t apply and schools couldn’t reach them.

“We hear from families who say: ‘I didn’t get this. I had no idea this existed,’” said Andrés Martínez, director of policy and communications at Conexión Américas, a group that works on issues affecting Latino families in Tennessee.

Martinez became so concerned that Spanish-speaking families were going to be left behind he created his own YouTube step-by-step explainer on how to apply for P-EBT. The video was viewed nearly 3,000 times on YouTube and passed around on Facebook. The group also set up a hotline to manually help households apply.

After facing pressure from groups like Conexión, Tennessee isn’t requiring an application this time.

Tennessee officials blamed changing USDA guidance for the delay and said they had been among the first states to apply for the aid this school year. Officials said the state received approval for its amended plan on March 19 and that its vendor said the cards are in the mail to the families of 350,000 children who qualify.

Game over: GameStop CEO heading for the exits