If President Donald Trump wants to know what it’s like to contract coronavirus in the final weeks of a campaign while taking heat for a laissez-faire approach to the pandemic, he can ask Missouri Gov. Mike Parson.

Parson, a Trump ally in a Republican-leaning state, quickly reopened Missouri after issuing a stay-at-home order in April, leaving much of the later response up to local governments. His hands-off approach has remained even as infection rates climbed and he suffered his own: Parson announced in late September he tested positive, and then on Wednesday said that he and his wife had “recovered.”

Like Trump, Parson hasn’t always heeded the advice of public health experts or been careful in how he talks about the health consequences of the pandemic, and he has resisted calls for a statewide mask order. Like Trump, Parson has focused his campaign on issues like the pre-Covid economy and “law and order.”

But Parson’s coronavirus diagnosis has ensured that the pandemic will be the central issue as he fights for another term against a fierce critic of his public health policies. And while the 19-point edge Trump racked up in Missouri in 2016 gives Parson a buffer that the president doesn’t enjoy against former Vice President Joe Biden, the Missouri Republican is still facing a stiff, well-funded challenge from State Auditor Nicole Galloway, the only Democrat in statewide elected office and a fierce critic of Parson’s coronavirus response.

Galloway’s latest ad this week told voters “Missouri is in the ‘red zone’” for increasing coronavirus cases and savaged the incumbent for his opposition to Medicaid expansion. Back in August, Missouri voters passed Medicaid expansion, so the next governor will be responsible for helping implement it. 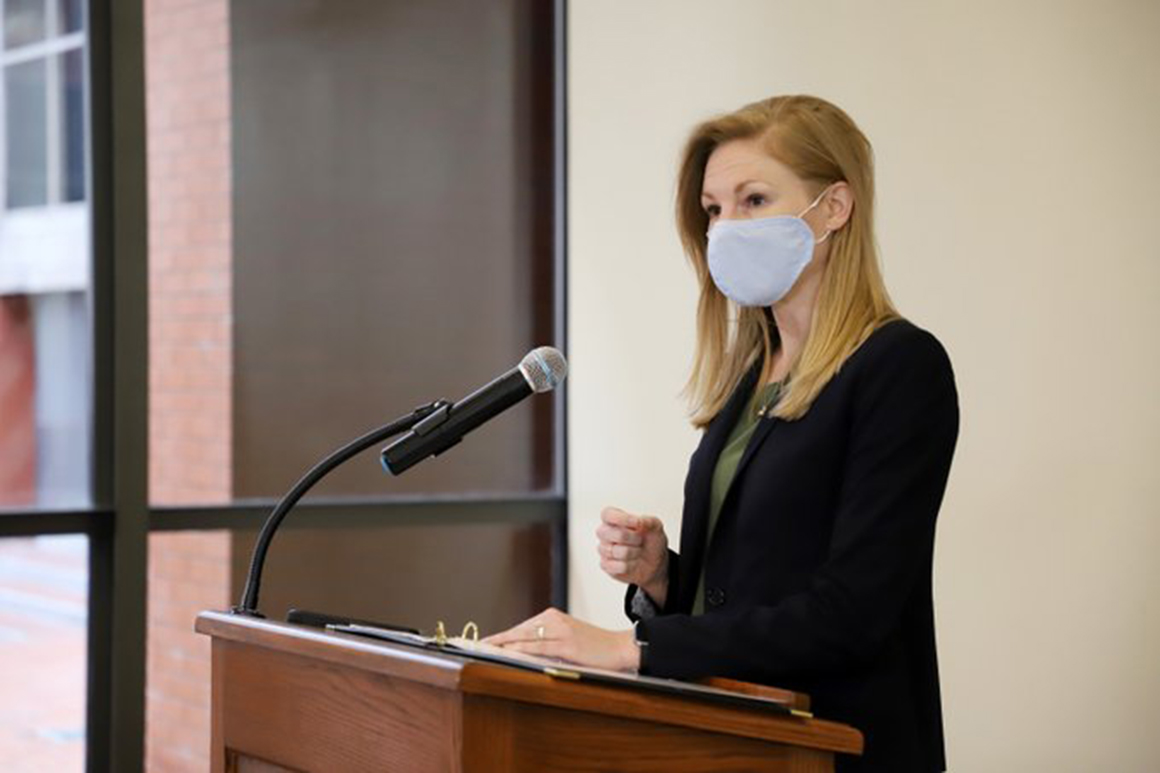 “Parson has fundamentally lacked leadership in his response out of political fear that his supporters are listening to Trump,” said Roy Temple, a veteran Democratic strategist and former state party chair. “He’s been very reticent to do anything … and in some ways he has been even less aggressive than Trump — as shocking as it is for me to say that out loud.”

But with Parson’s diagnosis coming one week ahead of Trump’s, Missouri Republicans and veteran GOP strategists say the governor’s handling of his own illness could ultimately help him with voters — and could even serve as a model for Trump to gain a leg up in his reelection campaign after lagging behind Biden in recent national and battleground-state polls.

“This is an era where this is no textbook for how to handle any of this — the pandemic, getting diagnosed in the middle of a campaign,” said John Hancock, chair of the pro-Parson Uniting Missouri PAC and former state GOP chair.

“But the governor has created a pretty great playbook in everyday reassuring the people of Missouri that he’s weathering this well. To the extent the president can follow what Mike Parson did in being public and transparent, he should,” Hancock added.

Parson has posted videos on his Facebook page almost daily to offer updates on how he’s feeling while he quarantines at the governor’s mansion. He’s set to end quarantine on Saturday and plans to get back to his official and campaign duties next week. A debate between Parson and Galloway has been rescheduled for next Friday.

Parson’s campaign manager, Steele Shippy, said the pandemic has been and will remain a central part of the campaign, citing the governor’s push for schools to reopen, the recovery of the state economy and public health.

Galloway’s campaign, for its part, argued that Parson is now focusing more on the virus after months of claiming victory, like Trump, in his handling of the pandemic while cases kept growing. “With Parson, it often feels like sometimes he is paying more attention to the politics of his own party than what is necessary to defeat the virus,” said Galloway spokesman Kevin Donohue.

CORONAVIRUS: WHAT YOU NEED TO KNOW

Parson, who took office in 2018 following the resignation of embattled Gov. Eric Greitens, has long refused to issue a statewide order for face coverings, saying it’s up to individual citizens and local officials to decide. In July, he was photographed without a mask at a Missouri Cattlemen’s Association steak fry, where the Springfield News-Leader reported he told attendees: “You don’t need government to tell you to wear a dang mask. If you want to wear a dang mask, wear a mask.”

Like Trump, he’s also made headlines this year for his messaging on the pandemic, which has at times been regarded as insensitive or off-base. In June, Parson said he did not feel guilty about an uptick in cases that followed his decision to reopen the state. One Democratic strategist noted how the comment was reminiscent of when Trump in March said, “I don’t take responsibility at all” for the United States’ lack of widespread testing.

In July, Parson met with Trump in Washington to press for school reopening. There, he acknowledged the president’s role in pressuring governors to reopen states and schools.

“I will tell you this: On a few phone calls I’ve had with him, he can put a little pressure on you if he tells you — if he decides to do that. … So sometimes, we all need a little push to get things going,” Parson said at the meeting with Trump.

Later that month, he made national headlines for saying on a St. Louis radio show that children would get coronavirus in school. “They’re going to go home, and they’re going to get over it,” he said.

Still, Parson is in a better position in the polls in Missouri than Trump is nationally. In polls, Parson has consistently led Galloway, though Democrats say Biden’s national momentum could help them close the gap, especially in some of the traditionally Republican suburbs around St. Louis, where Trump and the GOP are increasingly unpopular. Hancock, the Parson ally running his super PAC, pushed back on Biden’s influence in Missouri as the Democratic presidential nominee’s campaign has not been active in the state.

But Temple, the former Democratic chair, said it’ll ultimately depend on Parson, who was not previously elected into the governorship, and Galloway’s ability to build a profile — not Trump and Biden — in the final weeks.

“This is more of a jump ball. And the state — like much of the nation with Trump — is divided in reactions to them,” Temple said.

Impact on the campaign

image copyrightReutersThe government "will listen" to views on where new homes should be built but won't cut its target to build 300,000 homes a...
Read more
Asia-Africa

A public battle between Anthony Albanese, Mark Butler and Joel Fitzgibbon over Labor’s language regarding gas has triggered a process whereby the ALP has...
Read more

image copyrightReutersThe government "will listen" to views on where new homes should be built but won't cut its target to build 300,000 homes a...
Read more
Asia-Africa

A public battle between Anthony Albanese, Mark Butler and Joel Fitzgibbon over Labor’s language regarding gas has triggered a process whereby the ALP has...
Read more