Hundreds of people marched on Cardiff Bay police station on Tuesday, demanding “justice” for the “deeply concerning” death of a man who died hours after being released from custody.

Mohamud Mohammed Hassan was arrested on Friday evening after reports of a disturbance at his home but released the following morning without charge.

He was found dead on Saturday evening. His family claim the previously fit and healthy 24-year-old was assaulted while in police custody.

Police described his death as “sudden and unexplained” and say despite his injuries and death there were no indications of misconduct issues or excessive force use” by their officers.

Hassan’s post-mortem was due to take place on Tuesday. A Gofundme page to raise costs for his family’s legal fees and funeral expenses has raised nearly £40,000.

His aunt, Zainab Hassan, told BBC Wales she saw Hassan following his release on Saturday with “lots of wounds on his body and lots of bruises”.

“He didn’t have these wounds when he was arrested and when he came out of Cardiff Bay police station – he had them,” she said.

“Nothing we do is going to bring him back but we will not rest for a second until we have justice.”

Welsh first minister Mark Drakeford said he had found reports of Hassan’s death “deeply concerning” and said the circumstances “must be properly investigated”.

On Tuesday afternoon, the marching crowd of protesters chanted “no justice, no peace” as they made their way to the police station, and held up signs that read “Black Lives Matter” and “stop police brutality”.

One protester, Bianca Ali, 29, told the PA news agency: “The police have murdered a Black man. We want justice, we want transparency, we want answers, we want the truth.

“We want them to know that we will not stand for this and we’re here to make an example of one death that it cannot continue and spiral into more.”

She added: “It was a young boy, he had a baby on the way, he was married, he was settled down, and he was arrested for a breach of the peace which resulted in his death.” 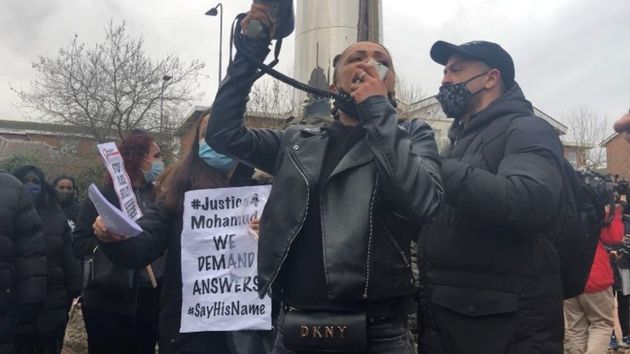 A 2015 report by the Institute of Race Relations said over the previous 24 years, more than 500 black and ethnic minority individuals died in suspicious circumstances in police custody yet not a single police officer had been charged over any of them.

And despite making up only around 3% of the UK population, Black people accounted for 8% of deaths in custody over the last 10 years.

Neil McEvoy, an MS who represents South Wales Central in the Senedd for the Welsh National Party, also attended the protest and said he wanted to see transparency from the police and the officers involved suspended from duty pending an investigation.

He said South Wales Police had a “bad history” with Black communities, including the wrongful conviction of three Cardiff men for the murder of Lynette White in 1988.

McEvoy told PA: “I believe in due process but there has to be due process.

“And the problem in South Wales is when you are quiet about things, due process does not happen. And there’s a terrible history in South Wales Police of miscarriages of justice.”

South Wales Police have urged against speculation, saying their early findings “indicate no misconduct issues and no excessive force”, but referred Hassan’s death to the Independent Office for Police Conduct (IOPC).

The IOPC’s director for Wales, Catrin Evans, said an independent investigation into police contact with Hassan will look at the level of force used by officers, including reviewing CCTV and police body-worn cameras, but said early indications showed no physical trauma to explain his death.

Evans said: “We are aware of concerns being expressed and questions being asked about use of force by police officers. We will look carefully at the level of force used during the interaction and I would urge people show patience while our inquiries, which will take some time, are made.

“Our investigation will focus on the interaction police had with Hassan during his arrest, the journey in a police van to custody, and the period of time he spent at Cardiff Bay police station including whether relevant assessments were made prior to his release.”