Any hopes of an outpouring of support for Donald Trump in the wake of his Covid-19 diagnosis were given a serious blow on Sunday, as a poll gave his election rival Jo Biden his widest lead in a month.

The Reuters/Ipsos poll also shows a majority of Americans think the president could have avoided contracting the virus if he’d taken it more seriously.

And only 34% said they thought that Trump has been telling them the truth about coronavirus since the pandemic began, while 55% said that he was not and 11% were unsure.

Among those adults who are expected to cast ballots in the November 3 election, the poll found that 51% were backing Biden, while 41% said they were voting for Trump.

Another 4% were choosing a third-party candidate and another 4% said they were undecided.

Biden’s 10-point edge over Trump is 1 to 2 points higher than leads Biden posted over the past several weeks, though the increase is still within the poll’s precision limits of plus or minus 5 percentage points.

Trump has repeatedly dismissed the severity of the pandemic as something that would disappear on its own, chiding Biden as recently as last week for wearing a protective mask, even as the coronavirus infected millions of people and forced businesses and schools to close.

Adding the the White House’s woes, the Trump administration is facing serious questions over the timeline of the president’s infection which, according to his own officials, suggest he travelled to a fundraiser in New Jersey despite already displaying symptoms.

And at least eight people who gathered at the White House on September 26 to celebrate Trump’s nominee for the Supreme Court have tested positive after foregoing masks, hugging and shaking hands.

Doctors, Nurses and ALL at the GREAT Walter Reed Medical Center, and others from likewise incredible institutions who have joined them, are AMAZING!!!Tremendous progress has been made over the last 6 months in fighting this PLAGUE. With their help, I am feeling well!

With about a month to go before the election, Biden has maintained an early advantage in securing the national popular vote. But to win the presidency, a candidate must prevail in enough states to win the Electoral College, and state polls show that Trump is nearly as popular as Biden in battleground states.

Trump, 74, was transferred to Walter Reed on Friday, hours after tweeting that he was diagnosed with Covid-19. The announcement set off a dizzying split-screen experience for many: as media alerts lit up cell phones and television chyrons about Trump feeling feverish and needing oxygen, several other Republican leaders who had been in close proximity with the president announced that they, too, had tested positive.

Most Americans continue to be deeply worried about the virus, and the poll found that 65%, including 9 in 10 registered Democrats and 5 in 10 registered Republicans, agreed that “if President Trump had taken coronavirus more seriously, he probably would not have been infected”.

Of those polled, 57% of Americans said they disapproved of Trump’s response to the Covid-19 pandemic overall, up about 3 points from a poll that ran late last week. 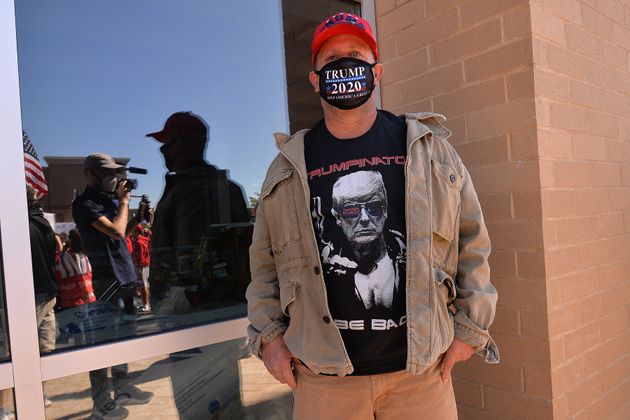 Americans also appear to be largely supportive of curtailing the 2020 presidential race to ensure everyone’s safety.

Sixty-seven percent of Americans want to stop in-person campaign rallies and 59% think the presidential debates should be postponed until Trump recovers from the coronavirus.

It is unclear at this point how Trump’s diagnosis will impact the next presidential debate, which is scheduled for October 15.

Trump said from his hospital room on Saturday that he felt “much better” but the next few days will be “the real test” of his treatment for Covid-19, capping a day of contradictory messages from the White House about his condition.

In a four-minute video posted on Twitter, Trump, looking tired and wearing a jacket and open-necked shirt, said he “wasn’t feeling so well” when he first arrived at Walter Reed National Military Medical Centre on Friday.

“Over the next period of a few days, I guess that’s the real test, so we’ll be seeing what happens over those next couple of days,” Trump said, seated at a round table in front of an American flag.

However, White House chief of staff Mark Meadows briefed reporters soon afterwards and said Trump went through a “very concerning” period on Friday and that the next 48 hours would be critical.

Further adding to the confusions, the president’s personal physician Dr Sean Conley had said the president was fever-free, was not on oxygen and was not having difficulty breathing.

Dr Conley refused to say whether Trump had ever been on oxygen despite repeated questioning, but said the president’s symptoms, including a cough and nasal congestion, “are now resolving and improving”.

A source familiar with Trump’s condition told the Associated Press the president was administered supplemental oxygen at the White House on Friday before going to hospital.

There was also confusion over when the president tested positive, as Dr Conley initially suggested Trump was 72 hours into the diagnosis.

Dr Conley later clarified he meant to say “day three” instead of 72 hours, and said the president had been first diagnosed with Covid-19 on Thursday evening

He also said Trump had received a first dose of a five-day course of Remdesivir, an intravenous antiviral drug sold by Gilead Sciences Inc that has been shown to shorten hospital stays.

The president is also taking an experimental treatment, Regeneron’s REGN-COV2, one of several experimental Covid-19 drugs known as monoclonal antibodies, as well as zinc, Vitamin D, famotidine, melatonin and aspirin.

The Reuters/Ipsos poll was conducted online, in English, throughout the United States. It gathered responses from 1,005 U.S. adults, including 596 likely voters.

Only about 61% of voting-age Americans actually voted in the 2016 election.

Healthcare workers at the Roosevelt Hospital in Guatemala City and around the country have been speaking out about their poor working conditionsGuatemala City,...
Read more
Asia-Africa

MEXICO CITY: A week before US elections, expectations and attention are unusually low in a foreign country that may have more at stake than any other....
Read more
Asia-Africa

WorldTraffic moves steadily on the Bay Bridge as the Bay Area braces for possible high winds as seen from Grizzly Peak Boulevard in...
Read more

Healthcare workers at the Roosevelt Hospital in Guatemala City and around the country have been speaking out about their poor working conditionsGuatemala City,...
Read more
Asia-Africa

MEXICO CITY: A week before US elections, expectations and attention are unusually low in a foreign country that may have more at stake than any other....
Read more
Asia-Africa

WorldTraffic moves steadily on the Bay Bridge as the Bay Area braces for possible high winds as seen from Grizzly Peak Boulevard in...
Read more