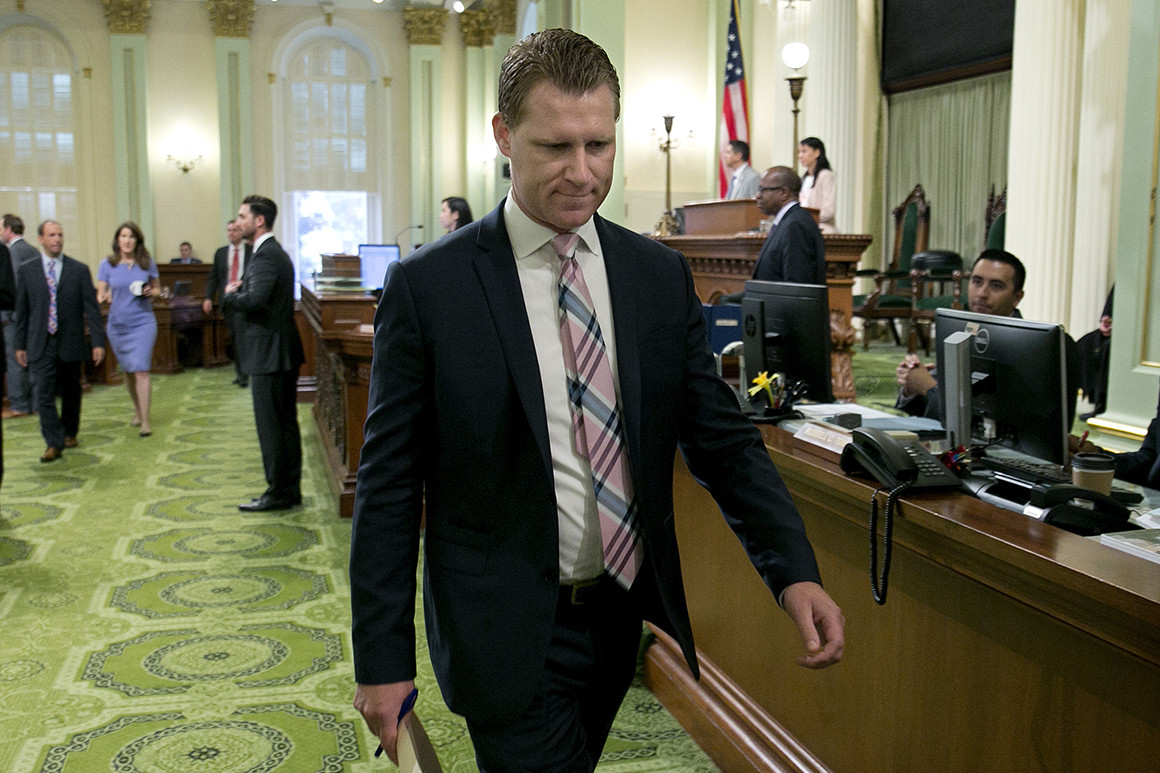 Assemblymember Chad Mayes of Yucca Valley is pictured Aug. 24, 2017 leaving the floor of the Assembly to attend a GOP caucus meeting where he resigned as Assembly GOP leader. | Rich Pedroncelli/AP Photo

The Democratic governor on Monday hastily dealt with a question about Trump’s removal, seeming uncomfortable talking about the issue amid the state’s coronavirus hospitalizations and vaccine rollout.

“I appreciate that focus, and I support it,” Newsom said of calls for Trump to leave. “But that’s not my focus right now.”

About an hour later, the Democratic-run State Assembly passed a resolution calling for an immediate end to Trump’s presidency. The legislation was introduced by the house’s former Republican leader.

California Assemblymember Chad Mayes, who left the Republican Party in late 2019 to become an independent, introduced House Resolution 7, which states that “Trump’s actions incited a deadly insurrection that attempted to prevent the peaceful transfer of power at the United States Congress on January 6, 2021.” House resolutions have no effect but serve as a declaration by legislators.

“The president invited the insurrections, he incited them, and for too long he did nothing to stop them,” Mayes said Monday during the Assembly’s first floor session of the year. “Members, if that is not an impeachable offense then I just don’t know what is.”

The Assembly voted 51-6 with no GOP support. While the outcome of Mayes’ resolution was not in doubt in heavily Democratic Sacramento, it forced legislators to publicly take sides in their first vote of 2021. Campaign operatives are already preparing to link pro-Trump Republicans to the riot.

“It is our responsibility to go on record, to go on notice on which side where we stand,” Mayes said.

During floor debate, Assemblymember Devon Mathis (R-Visalia) condemned the rioters but lambasted his colleagues for what he called a distraction from more pressing issues. “The first thing we do on a political floor in California is throw a political punch at a lame duck,” Mathis said. “You’re all better than this.”

Reactions to the riot continued to reverberate through the world of California politics on Monday. Assemblymember Randy Voepel (R-Santee) walked back recent comments in a San Diego Union-Tribune story comparing the Capitol siege to American Revolution battles at Lexington and Concord and warning that “tyranny will follow” President-elect Joe Biden taking office.

“I do not condone or support the violence and lawlessness that took place on Wednesday, January 6th, at our nation’s capital,” Voepel said Monday in a follow-up statement.

While the California Senate did not take up an impeachment resolution on Monday, its leaders opened by condemning the riot.

Two Democratic senators unveiled legislation that would compel California to create law enforcement units dedicated to fighting domestic terrorism. Sen. Henry Stern (D-Canoga Park) said in a statement that he introduced the bill in response to violence “effectively sponsored by a President and his loyalists in local, state and federal office who have been encouraging and supporting the white nationalist movement.”

Newsom last week was asked by POLITICO at his budget release whether he supported Trump’s impeachment, and the governor declined to answer before giving his short response today.

Mayes (I-Yucca Valley) once held the same Assembly Republican leader job that gave House Minority Leader Kevin McCarthy a launching pad more than a decade ago in the California Legislature. Mayes was head of the caucus from January 2016 until August 2017, when he lost his position after having provided then-Gov. Jerry Brown the necessary votes to extend the state’s cap-and-trade carbon emissions system.

Mayes’ bill underscores his increasing alienation from the Republican Party; he won reelection to his Assembly seat in November for the first time as an independent candidate and defeated a GOP challenger.

GOP legislators and party leaders, while vehemently criticizing the violence in last week’s assault on the U.S. Capitol by pro-Trump insurrectionists, have largely been silent on the role of President Trump in inciting their riots.

Mayes’ resolution asks the chief clerk of the Assembly to transmit copies of the resolution to congressional leadership and Trump administration officials. Mayes said this week that his former party must be held to account for its leader’s direct role in the insurrection.

“It will take a major correction to be able to heal the cancer that spread so rapidly within the party,” Mayes told the Southern California News Group.“The question that I have now is, was what happened [Wednesday] the end of something? Was it the carrying on of something? Or was it the beginning of something?”

This article tagged under: