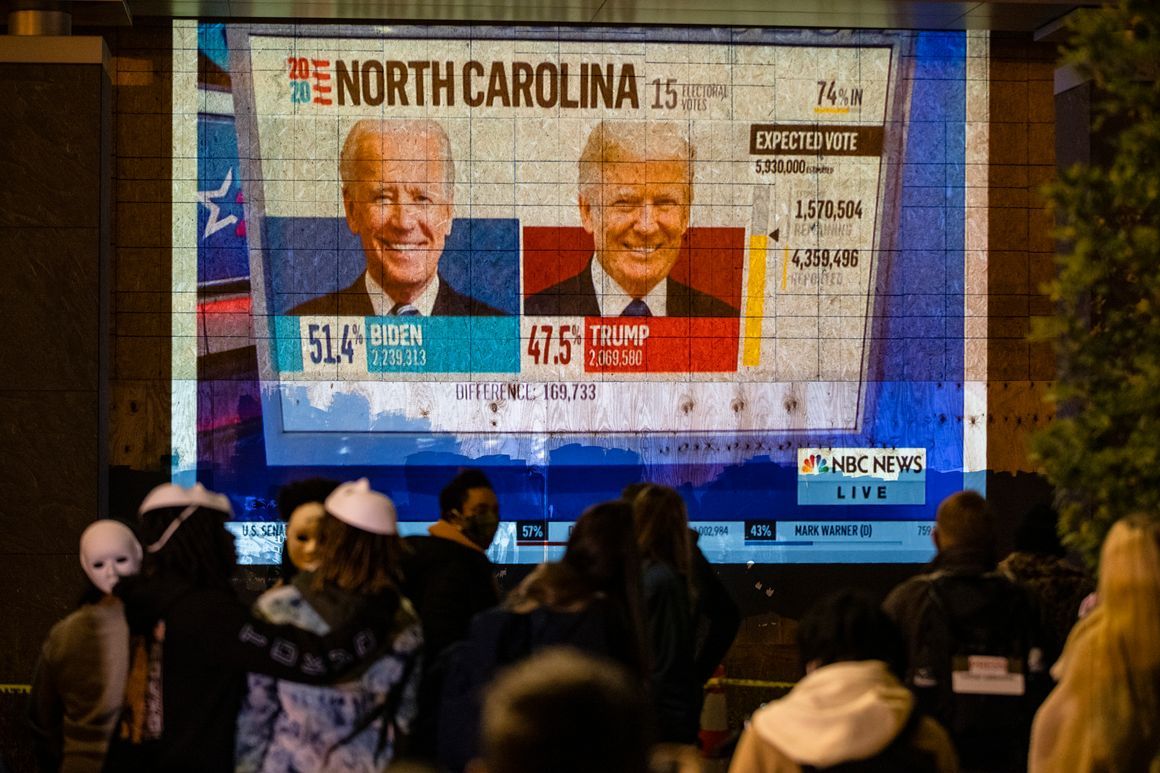 People watch a projection on the side of a building as poll reports begin to roll in on Election Day, Nov. 3, 2020 in Washington, D.C. | Samuel Corum/Getty Images

As Election Day 2020 coasted to a crawl and the West Coast voting precincts closed shop, the cable news networks were dazed to learn that even though the pollsters had predicted a flush, green, blossoming victory for Joe Biden, the presidential contest insisted on worming its way into the early a.m. hours, into the next morning, and maybe even beyond, pushing it into the sort of overtime periods and extra innings one associates with a sports event that refuses to end.

Surely the networks were prepared for such a contingency? But no, around the dial on Wednesday morning, the anchors and correspondents filled the air with journalistic chaff, noting incremental changes in vote totals in the contested states as new ballots were counted as if that were real news. It was enough to make the average viewer pray that the commissioner of baseball would take over the networks and decree that in the case of a tight election whose count threatens to go on forever, each candidate could place a metaphorical man on second at the beginning of their extra half-inning in hopes of hastening victory for one or the other.

But no such intervention has occurred. As I write Wednesday, the three major cable networks continue to cover the no-news of the protracted count. But instead of honestly conceding that there’s not much to report and won’t be for hours or even longer, they’re attempted to sustain a permanent state of excitement, fluffing their viewers with fancy finger-work on their big boards, zooming in to individual counties in Michigan, Wisconsin, Pennsylvania and elsewhere, zooming out, tapping the various in-play states on the map to create competing scenarios in which Biden or Donald Trump crest the 270 summit. Everybody in TV news is guilty of this crime, but nobody has a bigger rap sheet than CNN’s Wolf Blitzer, who can shout himself into a panic whenever a single county’s vote count inches upward.

Election Night TV news is worse than one of those Netflix series you continue to watch not because you’re interested any longer but because the sunk costs of your time persuade you that the rational thing is to view it to the end. This need to create continuous news is fairly unique to broadcasting, although online news can also fall into this trap. Newspapers, being published on a schedule, need to call their shots definitively. If events outrun them, they can always cover the news tomorrow (or in an online update). But television, always being on, has to pretend that news is a continuous curve and can be slivered, calculus style, into an infinitesimal number of slices for viewer satisfaction. There’s always a state attorney general or pundit for the cameras to swing to for some babble, or in the specific case of our president, some new Twitter provocation about the election being stolen to flush out.

To be fair to the cable news networks, the genre wasn’t designed for continuous viewing. Like sugar and whiskey, cable news is best taken in prudent doses. If you’re watching more than 20 minutes of election coverage at a time for a tight race, you’re doing it wrong because there is only so much journalistic massaging TV producers can do to a limited amount of information to make it look fresh. The same applies, of course, to most natural disaster coverage, riot reportage, terrorist attack dispatches, invasion communiques and other rolling news bulletins that grow elastic and meandering. Such is the magic of television news: It often takes you hours to realize you’ve been manipulated into watching detailed coverage that ultimately says so little. It leaves you as well informed about politics as watching the mercury rise on a thermometer in the hours of breaking dawn makes you knowledgeable about the weather.

It will never happen, but the news networks would be doing their viewers a service at times like these to confess that they’ve exhausted the strategic stockpile of news and that they’ll promise to ping you if something worthy of your attention expands to fill the news abyss. It’s not like there’s not a broadcast precedent for dimming the cameras and turning the microphones down when there’s nothing new to report. On Good Friday 1930, the BBC projected an ascetic attitude toward broadcast news by refusing to inflate coverage to fill the time allotted. The network leveled with its listeners when the 8:45 p.m. news program began—“There is no news tonight,” the announcer said—and then aired 15 minutes of a piano performance before switching to the next program, an opera performance from the Queen’s Hall.

I’m still watching CNN as I write this and really wish for my sake and his that John Berman and colleagues would stop adding corn starch to thicken their broadcasts and drop an atom bomb-burst of honesty to say, “There’s not much news this morning. Please tune in later.”

I hear the wiseguys saying, “There’s no Shafer column, either.” Send your cheap shots to [email protected]. My email alerts would love to work at the BBC. My Twitter feed once had a public access show. My RSS feed never watches TV.

Turkey protests against ‘unauthorised action, carried out using force,’ as Germany says everything went in line with protocol.A screen grab captured from a video...
Read more

Turkey protests against ‘unauthorised action, carried out using force,’ as Germany says everything went in line with protocol.A screen grab captured from a video...
Read more