Opinion | We Mock the Rioters as Ignorant Buffoons at Our Peril 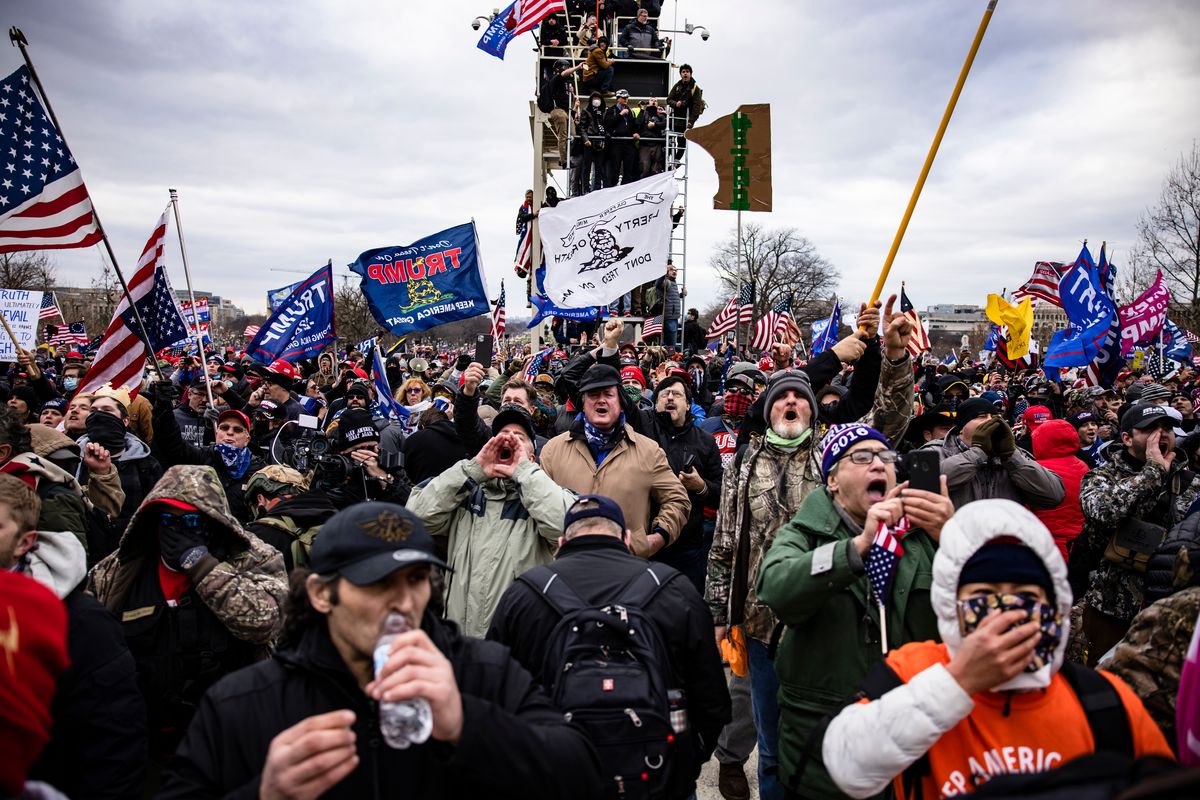 Having steered her essay onto insult highway, she laid rubber in all four gears. “Some rioters left the building in the charged, happy way people exit the Dive Devil ride at Magic Mountain,” she wrote, “single file, grinning, and not really sure what just happened. They cried out for beer, they pumped their fists in triumph, they went looking for Mom and money for curly fries.” Had Flanagan been given additional space by her editors, surely she would have included references to chewing tobacco, tractor pulls, cornhole, mobile homes, Big Gulps and cousin-marriage.

Many rioters at the Capitol obviously match the Flanagan template, enjoying McMuffins, curly fries and amusement park rides (as I do), and dressed in furs and anti-Semitic T-shirts. But her portrayal of the mob as composed of an easily ridiculed underclass isn’t the right take.

Based on the early arrests and news reports from the riot, the Capitol insurrectionists represent a bigger slice of white America than just the low-class knuckle-draggers who rolled in from the sticks on Donald Trump’s command. Many of the protesters and rioters we have met through rap sheets and press accounts are solidly middle class. Some of them are professionals and businesspeople who are as cosmopolitan as Flanagan, a longtime Atlantic writer who ordinarily cuts through sanctimony and sloppy thinking. Her miscalculation of who participated in the riot might make the people who like to look down their noses at the proles feel good, but it obscures the wide-ranging appeal the mob enjoys in America, it underestimates the mob’s true strength, and it slows our understanding of the mob’s motivation and masks the great difficulty we will have in nullifying their violent brand of politics.

As authorities continue to book additional rioters for criminal offenses, charges that may eventually include sedition and murder, we will gain a sharper picture of the crowd’s profile and learn more about these people who have embraced the QAnon religion and fell under Trump’s spell. But in the early going, we’ve learned that many who rallied or rioted on January 6 were, in Trump’s memorable 2016 phrase, only “the best and most serious people.” Take, for example, Bradley Rukstales, a tech CEO in suburban Chicago who faces charges of illegally entering the Capitol “with the intent of and impeding government business” or others arrested on similar charges: retired Air Force officer Larry Rendall Brock Jr; Republican state legislator Derrick Evans (who live-streamed his storming of the Capitol Building); Aaron Mostofksy, the son of a Brooklyn Supreme Court judge; Olympic gold medalist Klete Keller; and former Midland, Texas, mayoral candidate Jenny Cudd, who said in one video, “We did break down Nancy Pelosi’s office door.” Cudd was arrested Wednesday for her role in the Capitol rumble.

Then there are the ranks of those who haven’t been charged: a Seattle doctor, who appeared in a video recounting her storming of the Capitol. A former Republican state representative, who resigned his adjunct professor position at a college after posting a video of the melee outside the Capitol, as KDKA reported. A California physician (and vaccine critic), who read a speech inside the Capitol, and her communications director. A Texas attorney, alleged by the Houston Chronicle to have posted video from inside the Capitol, got sacked by his bosses for his “activism.” A housing entrepreneur, who was arrested for violating the curfew. An unnamed Pennsylvania teacher who was reportedly suspended for his role in the unrest, as the Morning Call reported. A retired SEAL, who bragged about “breaching” the Capitol. A Chicago real estate agent, who posted selfies from the crowd outside the Capitol on Facebook and was fired, in turn, by her bosses. Then there was an active-duty U.S. Army officer who led a group to the rally, making herself the subject of an Army probe, according to CBS News. Police departments in Seattle, New York, Philadelphia and other jurisdictions have opened investigations into whether any of their officers participated in the rebellion, as have some fire departments. And finally, let’s not forget Ashli Babbitt, the Air Force vet and QAnon devotee who was shot dead as she tried to vault through a just-broken window into the Speaker’s Lobby just outside the House chamber.

It would, of course, amount to an overcorrection if we attempted to characterize the riot as a middle-class insurgency. But many of the protesters who filled Washington’s 17 Hilton hotels to capacity and made the Grand Hyatt’s lobby their after-action lounge did not come from Dogpatch. Many hail from the Republican professional and political classes, and they fueled the rampage with their organizational skills and reputations just much as the face-paint guy did with his horns, fur, a U.S. flag mounted on a spear, and tattoos. Some of the criminal interlopers will argue that they only invaded the Capitol to exercise their First Amendment rights to petition the government for a redress of grievances. But that doesn’t fly. Nowhere does the First Amendment empower citizens to bull their way through a line of police—causing murderous injury to one—shatter windows and break doors, make violent threats and disrupt Congress. Nor does anybody have a right to stride into the Capitol behind the mob as long as they don’t break anything. The masses who coursed through the Capitol grand rooms and hallways clearly broke the law, and their overwhelming numbers abetted the rioters who spearheaded the attack.

Yes, there was plenty of class resentment at play at the Capitol and lots of overt racism, but we can’t assume that this was just a revolution by the powerless, the pathetic and the rural. The most shocking thing about the attack on the Capitol was that so many of the rioters were people who better resemble our kin and neighbors than they do the so-called barbarians from the boondocks.

The point here isn’t to sympathize with the rioters, or even seek to “understand” them, but to see them as they are and to prepare ourselves for future confrontations. How are we to deal with them as a country? I want to believe the intruders who now say they regret their actions of January 6. That’s exactly the sort of response you would hope to hear from an otherwise lawful American. But for every such apology we can be certain at least one person—and likely more—have been radicalized, maybe irreversibly, by the events. There are no easy ways to quell this national rebellion, a rebellion that appears to be gaining velocity, but the first step has got to be organizing a political taxonomy that doesn’t marginalize them as aliens. Instead of thinking of the rioters as “them,” try thinking of them as “us.” It’s bound to make you uncomfortable, but at least it’s a start.