What are the UK travel rules and will I have to quarantine in a hotel? 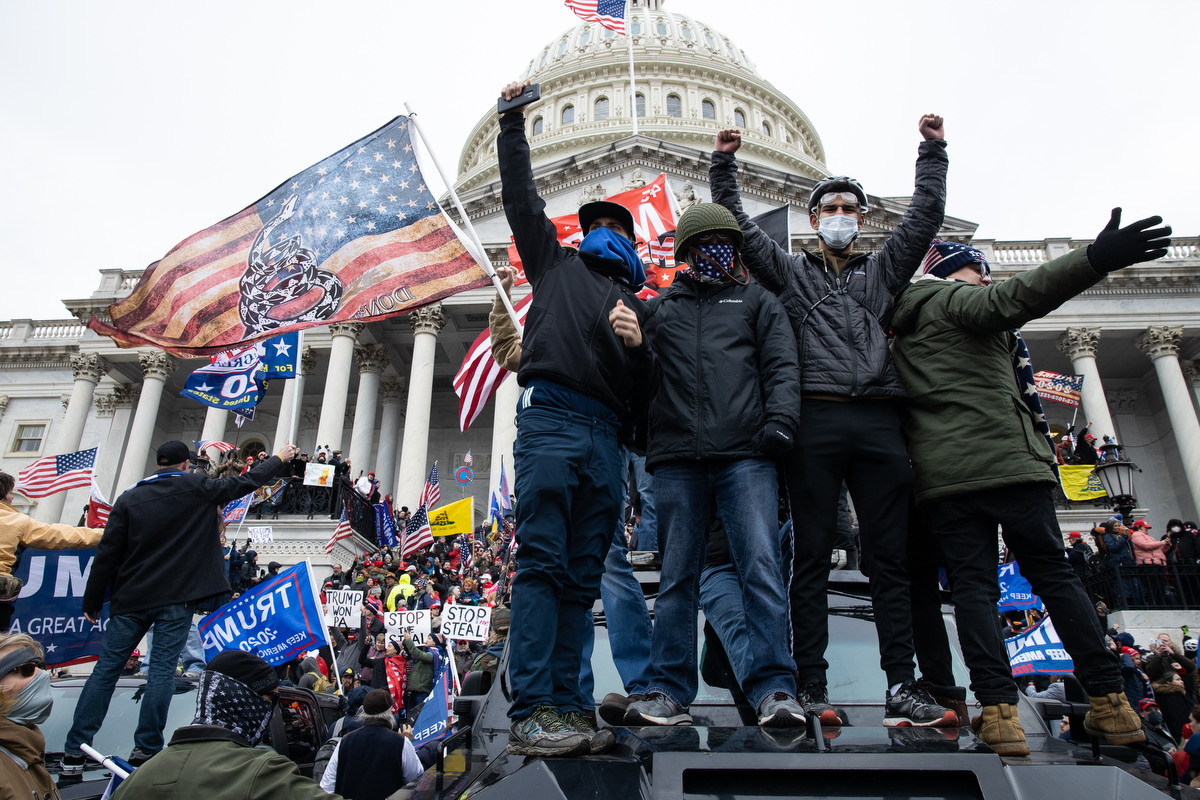 Fiona Hill served as deputy assistant to the president and senior director for European and Russian affairs on the National Security Council from 2017 to 2019. She is currently a senior fellow in the Center on the United States and Europe at the Brookings Institution.

Since last Wednesday, people have been arguing what to call what happened at the U.S. Capitol — was it a riot? An uprising? An insurrection? I’ve been public in calling it a coup, but others disagree. Some have said it’s not a coup because the U.S. military and other armed groups weren’t involved, and some because Donald Trump didn’t invoke his presidential powers in support of the mob that broke into the Capitol. Others point out that no one has claimed or proved there was a secret plan directed by the president, and that Trump’s efforts to overturn the outcome of the 2020 presidential election could never have succeeded in the first place.

These observations are based on the idea that a coup is a sudden, violent seizure of power involving clandestine plots and military takeovers. By contrast, Trump’s goal was to keep himself in power, and his actions were taken over a period of months and in slow motion.

But that doesn’t mean it wasn’t a coup attempt. Trump disguised what he was doing by operating in plain sight, talking openly about his intent. He normalized his actions so people would accept them. I’ve been studying authoritarian regimes for three decades, and I know the signs of a coup when I see them.

Technically, what Trump attempted is what’s known as a “self-coup” and Trump isn’t the first leader to try it. Charles Louis Napoleon Bonaparte (nephew of the first Napoleon) pulled one off in France in December 1851 to stay in power beyond his term. Then he declared himself Emperor, Napoleon III. More recently, Nicolas Maduro perpetrated a self-coup in Venezuela after losing the 2017 elections.

The storming of the Capitol building on January 6 was the culmination of a series of actions and events taken or instigated by Trump so he could retain the presidency that together amount to an attempt at a self-coup. This was not a one-off or brief episode. Trump declared “election fraud” immediately on November 4 even while the votes were still being counted. He sought to recount and rerun the election so that he, not Joe Biden, was the winner. In Turkey, in 2015, President Recep Tayyip Erdogan successfully did the same thing; he had called elections to strengthen his presidency, but his party lost its majority in the Parliament. He challenged the results in the courts, marginalized the opposition and forced what he blatantly called a “re-run election.” He tried again in the Istanbul mayoral election in 2019 but was thwarted.

There’s a standard coup “checklist” analysts use to evaluate coups. We can evaluate Trump’s moves to prevent the peaceful transfer of executive power against it. To successfully usurp or hold power, you need to control the military and paramilitary units, communications, the judiciary, government institutions, and the legislature; and mobilize popular support.

Let’s see how well this applies to what Trump has done.

The Military: During the 2020 Black Lives Matter protests, Trump drew Joint Chiefs Chair General Mark Milley and Defense Secretary Mark Esper out of a White House meeting to follow him for a provocative photo-op in front of a historic church. Paramilitary forces under the president’s command cleared a passage for his group across Lafayette Square. Trump was testing the military and the Pentagon to see if he could turn the U.S. armed forces into his own “Pretorian Guard.” The blowback from this episode emphasized the nonpolitical position of the U.S. military, but there was sufficient lingering concern that just days before January 6, 10 former Defense secretaries—including Esper, who had been forced out of his office for insufficient loyalty—felt compelled to issue an unprecedented public letter reminding Defense Department officials of their oath to uphold the Constitution.

Communications: In the old days, coup plotters would seize the Central Telegraph or Post Office, and later, radio and TV towers. Trump put a loyalist in charge of the Post Office. He did not take TV and radio by storm, but he discredited the “mainstream media” that was critical of his actions as the “enemy of the people” and recruited or pressured Fox News, Newsmax, OAN and social media platforms like Twitter and Facebook into participants in his efforts to sway public opinion in his favor. Twitter, in essence, was Trump’s equivalent of the TV and radio tower. He directly messaged the 88 million people who “followed” his account. He used social media and cable news to propagate false self-serving narratives, reinforce messages to provide justification for his actions, and mobilize his supporters.

The judiciary: With the help of Republican lawmakers, Trump stacked federal courts with what he kept calling “his judges.” He successfully pushed through the appointments of three new Supreme Court justices ahead of the presidential election. He made his expectation clear that if the Supreme Court had to settle an election dispute, then “his justices” would tilt the verdict in his favor. Erdogan did the same in Turkey, purging the judiciary and installing loyalists who facilitated his rerun of the 2015 election and sentenced political opponents to long prison terms. Trump frequently called for investigations into his opponents and for courts and law enforcement to “lock them all up!”

Government institutions: As in Turkey, Trump purged Cabinet members and career officials who resisted him. He bypassed Congress and installed acting officials in crucial national security positions like the secretaries of Defense and Homeland Security, and, briefly, the director of National Intelligence. He made it crystal clear that personal loyalty was the primary factor for candidate selection. He removed Esper after he lost the election. Attorney General William Barr resigned in the same period amid rumors he would be sacked for failing to declare massive election fraud. Trump wanted officials in place in January 2021 who were entirely beholden to him and likely to support his efforts to stay in power.

The legislature: Finally, Trump usurped the Republican Party. He claimed the more than 74 million who voted for him last November as his personal base—his popular support. He threatened to destroy the careers of Republican members of Congress who did not favor overturning the election result. At the January 6 rally preceding the storming of the Capitol, Donald Trump Jr. even referred to the GOP as the “Trump Republican Party.” In the end, even after the Capitol was seized by Trump’s violent mob, 147 Republican members of Congress, led by Minority Leader Kevin McCarthy, did endorse some of Trump’s efforts to challenge the election results and overturn the constitutional order. So did Senators Josh Hawley, Ted Cruz and six other politically ambitious senators who wanted to tap into Trump’s popular support. In this way, Trump’s control of the legislature and a significant popular mandate was almost within his reach.

The truth is that for the past four years, Trump has been stress testing the U.S. democratic system to see if anyone will rein him in. Consider how many times he stated that he “deserved” two or even three terms in office because he was treated “unfairly” or “cheated” out of the first two years of his presidency by the “Russia hoax,” the Mueller investigation and last year’s impeachment trial. Throughout 2020, when his poll ratings faltered, the president laid the groundwork for what would become the Big Lie that he won the election. He said in advance that the ballot was “rigged” and that he could lose only if “they” stole the election. “They” was a domestic enemy that he manufactured in broad strokes for his grassroots base to rise up against: Democrats, liberals, globalists, radical socialists, communists, antifa leftists, the Black Lives Matter movement, the mainstream media, George Soros, various other “bogey” men and women, deep state bureaucrats, and even congressional Republicans, whom he labeled “RINOs” (“Republicans in Name Only”) and “Never Trumpers.”

After the election was declared in favor of Biden, Trump refused to concede. He never stopped lying about the outcome to his base and the rest of America. He deployed Rudy Giuliani and his legal team to contest every single postelection juncture. He harangued state election officials in phone calls and in person to intimidate them into repudiating or even changing the vote tallies. He told Vice President Mike Pence to block the formal election certification process in Congress, which was beyond his constitutional authority. When Pence refused, Trump rallied thousands of his supporters to “stop the steal” on Capitol Hill.

So, what thwarted Trump’s slow motion, in-plain-sight attempt at a self-coup? Fortunately, there was pushback from all the key institutions you need for a coup. First, the military and other parts of the government resisted Trump’s efforts to personalize their power. Second, major media outlets reported the facts truthfully. Social media outlets flagged the president’s lies about the election—albeit belatedly—and Twitter and Facebook ultimately cut off his accounts. Third, the judiciary and courts held firm. “Trump judges,” all the way up to the Supreme Court, respected their oath of office and rejected the president’s appeals to overturn legitimate election results. Fourth, state and local government officials refused to be swayed. They repeatedly called out the lie that Trump had won the election. Finally, in the legislature, the vice president performed his constitutional role, as did the Republican Senate majority leader and most of the Senate. The only two elements that rallied behind the president’s coup attempt were the handful of senators and the majority of House Republicans and his popular support, in the form of an insurgency—the mob that stormed the Capitol.

The good news for the United States is that Trump’s self-coup failed. The bad news is that his supporters still believe the false narrative, the Big Lie that he won the election. Trump has not repudiated it, nor have the House and Senate Republicans who voted against the Electoral College results. Millions of people still think the election was stolen. They still support Trump the person, not the Republican Party, and many are prepared to take further action on his behalf.

As in the case of other coup attempts, the president’s actions have put us on the brink of civil war. Trump did not overturn the election results, but, just as he intended, he disrupted the peaceful democratic transition of executive power.

Unless the Big Lie is thoroughly refuted, we can expect more attempts to subvert the constitutional order from Trump’s supporters—and we still have to get through the January 20 inauguration. The president’s actions and his falsehoods have shattered America’s democratic norms, exacerbated its political divisions and put people’s lives at risk. Five people died during events surrounding the storming of the Capitol, including a member of the U.S. Capitol Police force. Many of the members of Congress who backed Trump’s efforts were themselves at risk of injury or death.

If we are to restore democratic norms and make sure this does not happen again, these congressional Republicans will have to take personal responsibility for their actions in support of Trump’s coup attempt. They must tell the truth to their constituents about the election and what the president tried to do in January 2021. They owe it to the people they represent as well as the country they serve.

What are the UK travel rules and will I have to quarantine in a hotel?