Boris Johnson risks paying a “terrible price” in his early relationship with Joe Biden if he pushes ahead with his law-breaking Brexit plans on Monday, Labour has warned.

Downing Street sources have signalled that the prime minister is not going to offer concessions on the controversial proposals in his internal market bill, despite facing an embarrassing defeat when peers vote on the measures on Monday.

Johnson’s plans, which would give ministers the power to breach the PM’s own withdrawal agreement with the EU, risk angering the US president-elect who is said to have “significant concerns” about the bill’s impact on peace in Northern Ireland.

With the Lords almost certain to inflict a large defeat on the government to remove the offending clauses from the bill, the PM faces the prospect of having to actively reinsert the controversial plans when the legislation returns to the Commons in upcoming weeks, likely in defiance of Biden.

Reports that Johnson could simply admit defeat and leave the clauses out of the bill following a Lords defeat were also dismissed by a No.10 source, who said the government had been “clear why they are needed”.

Shadow attorney general Lord Falconer told HuffPost UK it was not too late to remove the offending parts of the bill, warning Johnson he risks damaging the country’s reputation as Biden prepares to take office.

Falconer is leading the rebellion against the plans alongside ex-Tory leader Lord Michael Howard and Lord Judge, a former Lord Chief Justice.

He said: “We always said the UK would pay a terrible price of breaking with the rule of law, and now, almost immediately after we can see that price being paid with the government’s actions being called out by the United States government.

“It is not too late for the government to change course, and remove these offending clauses in this bill.

“We need to get back on the side of the law before even more damage to our country’s reputation is done.” 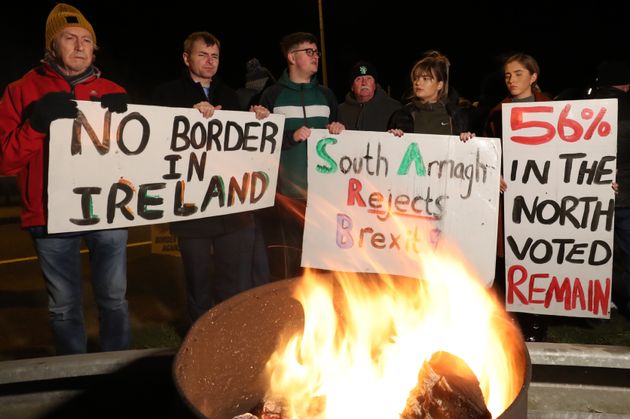 The row centres on the special status created in the Brexit withdrawal agreement for Northern Ireland, which will follow EU rules in some areas while the rest of the UK will not, in order to maintain an invisible border with the Republic of Ireland.

This would also create a need for checks on goods travelling between Northern Ireland and the UK mainland, which Johnson has previously opposed.

In defiance of this arrangement, the internal market bill would give ministers the power to disapply the need for exit summary declarations (as required under EU customs code) for goods moving between Northern Ireland and the rest of the UK.

It would also give ministers the power to decide what constitutes state subsidies for businesses in Northern Ireland, which also goes against the agreement Johnson signed with the EU.

On Sunday, Biden ally Chris Coons said the president-elect had “significant concerns” about how Johnson’s proposals could impact the Good Friday Agreement for peace in Northern Ireland, which the withdrawal agreement was designed to protect.

But a No.10 source made clear the UK would not back down on the plans.

They said: “We’ve been very clear about the purpose and have repeatedly set out our specific reasons for introducing the measures related to the Northern Ireland protocol in the UK internal market bill.

“We need to create a legal safety net to protect the integrity of the UK’s internal market, to ensure ministers can always deliver on their obligations to Northern Ireland and protect the gains from the peace process.”

On Sunday, Johnson also made clear the bill would proceed.

“The parliamentary timetable goes ahead and the whole point of that Bill and indeed the finance bill is to protect and uphold the Good Friday Agreement and the peace process in Northern Ireland,” he told broadcasters.