President Donald Trump said from his hospital room on Saturday that he felt “much better” but the next few days will be “the real test” of his treatment for Covid-19, capping a day of contradictory messages from the White House about his condition.

In a four-minute video posted on Twitter, Trump, looking tired and wearing a jacket and open-necked shirt, said he “wasn’t feeling so well” when he first arrived at Walter Reed National Military Medical Centre on Friday.

“Over the next period of a few days, I guess that’s the real test, so we’ll be seeing what happens over those next couple of days,” Trump said, seated at a round table in front of an American flag.

However, White House chief of staff Mark Meadows briefed reporters soon afterwards and said Trump went through a “very concerning” period on Friday and that the next 48 hours would be critical.

Further adding to the confusions, the president’s personal physician Dr Sean Conley had said the president was fever-free, was not on oxygen and was not having difficulty breathing.

Dr Conley refused to say whether Trump had ever been on oxygen despite repeated questioning, but said the president’s symptoms, including a cough and nasal congestion, “are now resolving and improving”.

A source familiar with Trump’s condition told the Associated Press the president was administered supplemental oxygen at the White House on Friday before going to hospital.

There was also confusion over when the president tested positive, as Dr Conley initially suggested Trump was 72 hours into the diagnosis.

Dr Conley later clarified he meant to say “day three” instead of 72 hours, and said the president had been first diagnosed with Covid-19 on Thursday evening

He also said Trump had received a first dose of a five-day course of Remdesivir, an intravenous antiviral drug sold by Gilead Sciences Inc that has been shown to shorten hospital stays.

The president is also taking an experimental treatment, Regeneron’s REGN-COV2, one of several experimental Covid-19 drugs known as monoclonal antibodies, as well as zinc, Vitamin D, famotidine, melatonin and aspirin. 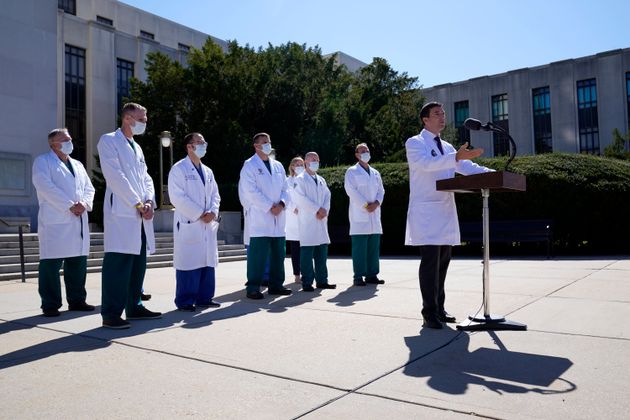 The White House said the 74-year-old would work from the hospital’s presidential suite, which is equipped to allow him to continue his official duties.

The president is at high risk because of his age and weight. He has remained in apparent good health during his time in office but is not known to exercise regularly or to follow a healthy diet.

Christie said he checked himself in to a hospital on Saturday as a precaution due to his asthma, though he said he had only mild symptoms.

In consultation with my doctors, I checked myself into Morristown Medical Center this afternoon. While I am feeling good and only have mild symptoms, due to my history of asthma we decided this is an important precautionary measure.

Soon after Dr Conley’s update on Saturday, Trump tweeted: “Doctors, Nurses and ALL at the GREAT Walter Reed Medical Centre, and others from likewise incredible institutions who have joined them, are AMAZING!!! Tremendous progress has been made over the last 6 months in fighting this PLAGUE. With their help, I am feeling well!”.

Prime minister Boris Johnson said he was sure the president would “come through” his treatment “very well”.

Doctors, Nurses and ALL at the GREAT Walter Reed Medical Center, and others from likewise incredible institutions who have joined them, are AMAZING!!!Tremendous progress has been made over the last 6 months in fighting this PLAGUE. With their help, I am feeling well!

Speaking to reporters on Saturday morning, Johnson said he rang the White House on Friday night and added: “I think obviously everybody’s wishing him and Melania the very best and hoping that they recover speedily and I’ve no doubt that he will, he’ll make a very strong recovery.”

When asked if he had any advice for Trump, Johnson added: “I think that he will be doing exactly what the doctors tell him to do and I’m sure he will be having the best care he can possibly get.” 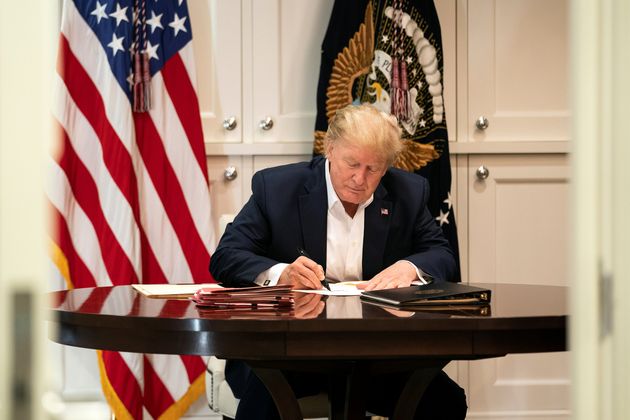 Meanwhile in the UK, almost 13,000 new cases of Covid-19 have been confirmed – but the Government said a technical glitch had led to an under-reporting of figures this week.

The official dashboard said on Saturday that due to a technical issue, now resolved, there had been a delay in publishing a number of cases.

This means the total reported over the coming days will include some additional cases from the period between September 24 and October 1.

Experts have previously warned describing the daily figure as a record could be misleading as it is not clear how many people were actually infected during the height of the first wave due to a lack of community testing at the time.

The Prime minister has called for people to be “patient” as the Government seeks to stifle a second wave of outbreaks, with more than a third of the UK population now living under heightened restrictions.

Labour leader Sir Keir Starmer accused Mr Johnson of having “lost control” of the fight against the virus and having no clear strategy.

Sir Keir said the PM should produce a new “road map” for navigating the country through the winter, including investing in NHS labs and university labs to expand testing, ensuring routine regular testing for all high-risk workplaces and high transmission areas, and a programme to ensure the manufacture and distribution of any vaccine.

Speaking to The Observer, he said: “The prime minister is governing in hindsight. So he charges forward, not recognising the problem, has a car crash, looks in the rear mirror and says ‘what’s all that about?’”

Meanwhile, Number 10 has vowed the prime minister will “not be blown off course” by the coronavirus pandemic from delivering his manifesto commitments.

Commons Leader Jacob Rees-Mogg has written to his Cabinet colleagues calling for “bold and ambitious” bills for the next Queen’s Speech, Downing Street said