Leadership fails to manage rules and fallout of the short-lived Trump policy that separated 3,000 families.

Justice Department leaders under President Donald Trump knew their 2018 “zero tolerance” border policy would result in family separations but pressed on with prosecutions even as other agencies became overwhelmed with migrants, a government watchdog report released on Thursday has found.

The report from the inspector general for the Justice Department found that leadership failed to prepare to implement the policy or manage the fallout, which resulted in more than 3,000 family separations and caused lasting emotional damage to children who were taken from their parents at the border. The policy was widely condemned by world leaders, religious groups and legislators in the US as cruel.

The report found that one of the administration’s talking points was: “An illegal alien should not get a free pass just because he or she crosses the border illegally with a child.”

Former Attorney General Jeff Sessions, along with other top leaders in the Trump administration, were bent on curbing immigration. The “zero tolerance” policy was one of several increasingly restrictive policies aimed at discouraging migrants from coming to the southern border. Trump’s administration also vastly reduced the number of refugees allowed into the US and all but halted asylum at the border, through a combination of executive orders and regulation changes.

Former Attorney General Jeff Sessions, along with other top leaders in the Trump administration, were bent on curbing immigration [File: Vasha Hunt/AP Photo]President-elect Joe Biden said Trump’s restrictive immigration policies are harmful, and in a news conference on Friday, promised a thorough investigation into the policies that led to family separation.

He also promised to reverse Trump’s immigration policies that he put in place through executive order.

“I will introduce an immigration bill immediately, and have it sent to the appropriate committees, immediately,” Biden said in Wilmington, Delaware.

The American Civil Liberties Union sued to stop the separations and a federal judge ordered the families to be reunited.

“The family separation crisis is the direct result of the Trump administration policy choices, driven by the view that immigrants and asylum seekers deserve nothing but cruelty and punishment,” the group wrote on its website.

These families deserve citizenship, care, and a commitment that family separation will never happen again.

Lawyer Lee Gelernt, who has been working for years on the issue, said the practice was “immoral and illegal”.

The “zero tolerance” policy meant that any adult caught crossing the border irregularly would be prosecuted for illegal entry. Because children cannot be jailed with their family members, families were separated and children were taken into the custody of Health and Human Services. The policy was a colossal mess – there was no system created to reunite children with their families. The watchdog report found that it led to a $227m funding shortfall. 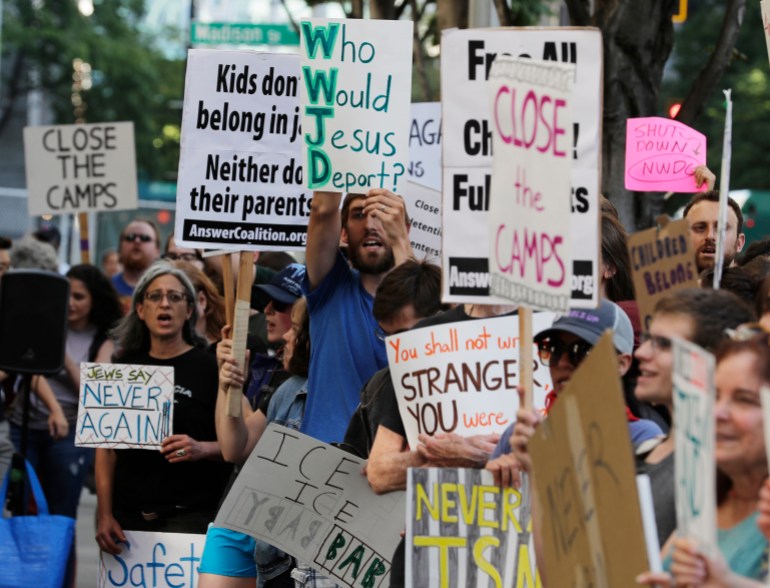 The watchdog report found that judges, advocacy groups and even federal prosecutors raised concerns over the policy, but Jeff Sessions and others wrongly believed that arrests at the border would not result in prolonged separation and ignored the difficulty in reuniting families [File: Ted S Warren/AP Photo]According to the report, department leaders underestimated how difficult it would be to carry out the policy in the field and did not inform local prosecutors and others that children would be separated. They also failed to understand that children would be separated longer than a few hours, and when that was discovered, they pressed on.

“Department leadership did not take steps, after learning about difficulties in identifying the location of separated children, to reconsider their prior assumptions about the ability to immediately reunify separated families,” the report found.

The policy began on April 6, 2018, under an executive order that was issued without warning to other federal agencies that would have to manage the policy. It was halted on June 20, 2018.

And close to three years after the Trump administration enacted “zero tolerance”, more than 600 parents who were separated from their children have still not been located by a group of outside lawyers working to reunite families, according to a court filing on Wednesday.