Coronavirus: sharing too much information on pandemic may have a negative impact on family relationships, Hong Kong survey finds

Stacey Solomon: ‘My Whole Life, I’ve Had To Prove I’m Not An Idiot’ 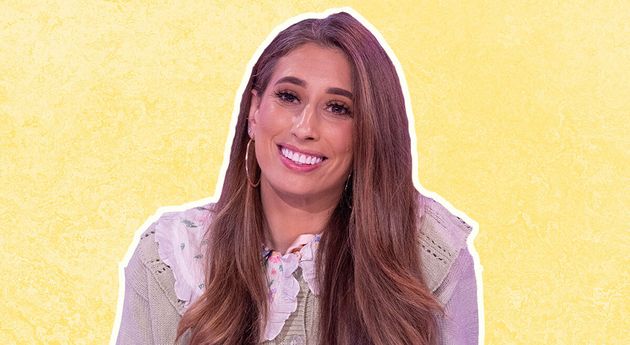 In What Works For Me – a series of articles considering how we can find balance in our lives – we talk to celebrities about wellbeing and self-care.

Stacey Solomon’s house is not a quiet one, with her partner Joe Swash, three sons, a step-son and a dog to contend with. But the Loose Women star says she still claws back moments of me-time, for the sake of her mental health.

“Self-care has to be a conscious effort, because I often think there’s a whole family tree of people who come before I do,” she tells HuffPost UK.

“Sometimes, I have to make a point of saying to myself: ’You know what Stace, if you don’t have a bath one day this week, it’s not going to do you any favours. If you don’t turn your phone off for the day today and say ‘no’, you’re going to be impacted negatively.”

The latter has been particularly hard in the pandemic, she says, because “no one is shutting off anymore” – and people seem to be getting in touch 24/7. “Sometimes you have to force yourself not to reply and say: ‘Sorry, I was asleep – I’m not a vampire!’” she jokes.

These tactics give Stacey “a moment to be still’ – but they don’t fix everything. “I don’t want to sit here and say it makes a dramatic difference to my life,” she says, “because sometimes I think there are ways you feel in life that you just can’t get out of, no matter what you do.”

Stacey has experienced anxiety from early childhood and has tried everything to tackle it, from hypnosis to EMDR therapy and cognitive behavioural therapy.

“I don’t know life without it,” she says. “The only thing that has helped me over the years is just embracing that it’s a part of me. I genuinely don’t think at this point it will ever go away, no matter how much therapy I have. I’ve admitted to myself that it’s part of my personality.” 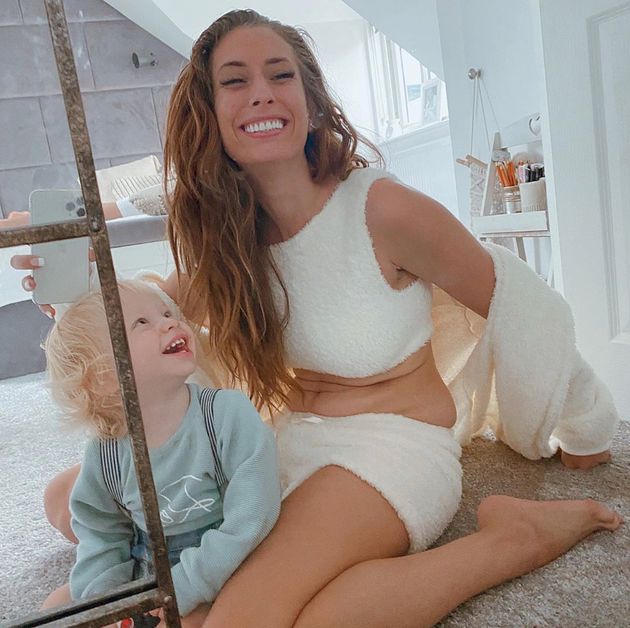 Stacey’s anxiety is characterised by a fear of death. Hearing about death on the news, or that a distant acquaintance has died, can be a trigger. At times, it’s caused her to experience anxiety attacks.

“If I feel myself getting an anxiety attack now, I have to sit still and play it out through my mind logically,” she says. “I have to think: ‘This will come and this will be awful, but then it will go.’ The more I focus on the fact it will go and it’s not going to be there forever, the easier it is for me to ride though it.’”

She still isn’t sure what caused her to question her mortality so often in childhood. She had some respite from anxiety in her teens, when she went through a stage of feeling “immortal and invincible”. But giving birth to Zach at 17 brought back her old concerns – and they’ve been with her ever since.

“When I gave birth it was such a trauma and I realised how fickle life was, because I felt really out of control,” she says. “I thought I was going to die.”

Part of the problem, says Stacey, is that women weren’t taught about the realities of birth 12 years ago, so everything came as a complete shock.

“When I had Zach, I didn’t even know I’d give birth to a placenta afterwards,” she says. “No one said: ‘You’ll probably shit yourself, your baby might poo inside you, you’re going to tear from your bum to your vagina and you won’t be able to wee for about three days afterwards.’”

It’s why she’s so passionate about sharing the realities of pregnancy and birth on her Instagram, such as showing her blood-spattered t-shirt and towel after giving birth to her youngest, Rex. She also regularly posts pictures and captions relating to body image, showing her cellulite or loose skin after pregnancy.

“Sometimes I sit there and question whether I should put something up because it doesn’t look like everyone else’s pictures,” she says. “But then I think: ‘Surely everyone looks like this, and what is it doing to people when they don’t see it?’” 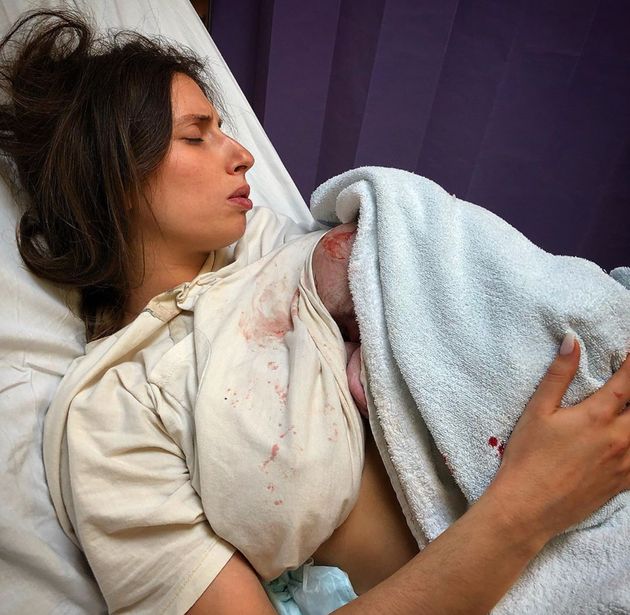 While Stacey’s posts come across as self-assured, she admits she’s still prone to a “crisis of confidence” over her intelligence – more than a decade after hitting our screens on the X Factor.

“I’ve felt like my whole life, I’ve had to prove I’m not an idiot,” she says. “I still worry about if people think I’m dumb because of my accent. I’m not stupid – I’m just not from a privileged background and I’m not serious a lot of the time.”

Self-doubt can also creep in when she’s honest about her mental health struggles online, because she feels like she’s “supposed to be the happy one” who’s known for smiling and joking. “You can’t just be one thing all of the time,” she says. “But you feel like you have to portray that, because that’s how people characterise you.”

Her tactic for boosting her self-esteem is to ignore all feedback about her – whether it’s good or bad. It’s something she regularly speaks to her boys about, teaching them to follow their passions, rather than be influenced by others.

“For example, if I was going to make a unicorn pumpkin that I thought was the best thing since sliced bread, but 50,000 people thought it was ridiculous, the best thing I can do is just put it out there, make it and not even acknowledge anyone else’s opinion, whether it’s good or bad,” she explains.

“Then, my opinion is protected in my brain and I can just walk around thinking I’ve done the best thing ever.”

At 30, letting go of others’ judgements has helped Stacey feel free and totally herself, even embracing the parts of her personality she’d rather change.

“You can’t win,” she says. “You’re either too perfect or not perfect enough, so you can only be you – and unapologetically you.”

Ahead of the International Day of the Girl, Stacey Solomon has joined forces with the Dove Self-Esteem Project and body image expert Professor Phillippa Diedrichs to host a special IG Live about the importance of building positive self-esteem in young people at 9pm on 8th October. Tune in on Stacey’s and Professor Phillippa’s Instagrams and find out more  at Dove.com/selfesteem.

More From What Works For Me:

The Polaris Slingshot has always wowed. Three wheels, open cockpit, and a design reminiscent of the Batmobile. It draws a crowd and is a...
Read more
Asia-Africa

Azerbaijani soldiers fire an artillery piece during fighting on October 20, 2020A truce in Nagorno-Karabakh was under severe strain on Tuesday after fresh...
Read more

The Polaris Slingshot has always wowed. Three wheels, open cockpit, and a design reminiscent of the Batmobile. It draws a crowd and is a...
Read more
Asia-Africa

Azerbaijani soldiers fire an artillery piece during fighting on October 20, 2020A truce in Nagorno-Karabakh was under severe strain on Tuesday after fresh...
Read more

Coronavirus: sharing too much information on pandemic may have a negative impact on family relationships, Hong Kong survey finds