‘No action on anything’: Australia increasingly isolated as US and others ramp up climate ambition

The big hole in America's plan to fight Covid-19 variants 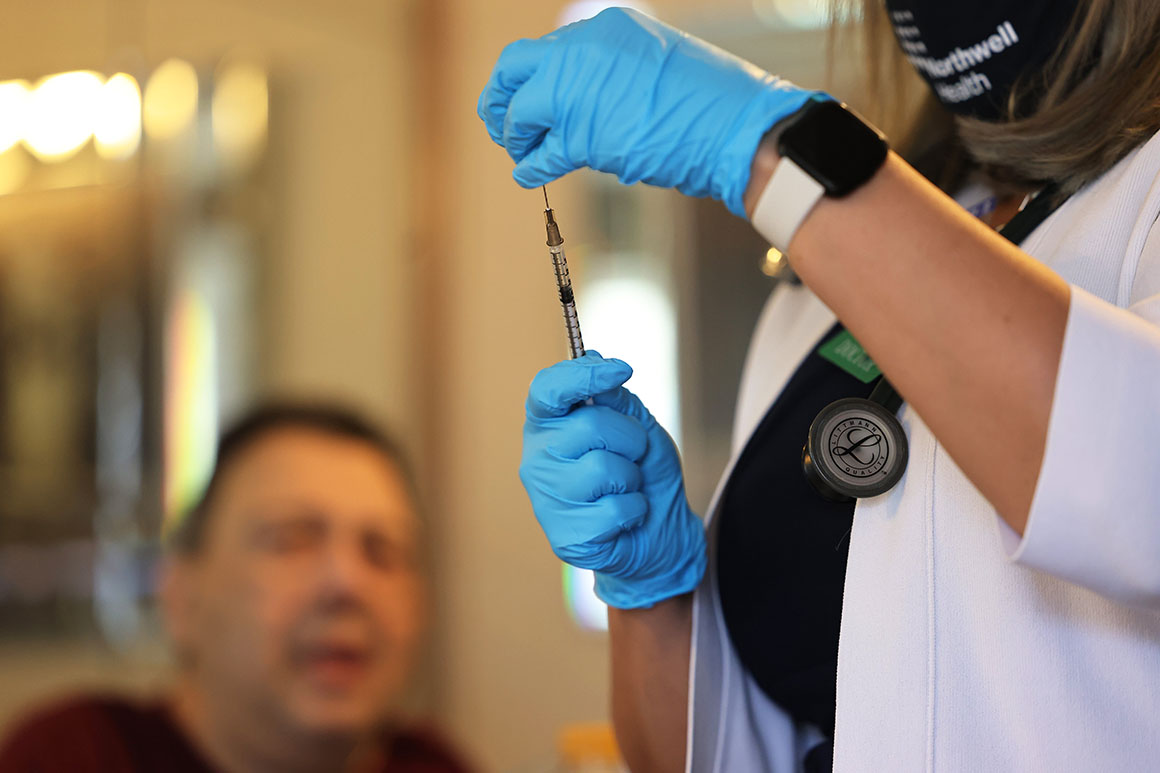 The global scramble to produce enough Covid-19 vaccine for 7 billion people is about to get even tougher, as drugmakers and countries ready a second round of shots to combat the growing threat of virus variants.

Finding vaccines that can ward off more contagious or virulent strains is only half the battle. The United States has virtually no capacity to manufacture revised vaccines or booster shots alongside the original versions, according to a half-dozen vaccine experts and Biden administration health officials. Setting up additional facilities could take months or even years.

Vaccine makers like Pfizer, Moderna and Johnson & Johnson coped with intense global demand for their original shots by manufacturing millions of doses while the vaccines were still in clinical trials. But that is not an option now, because the companies are still racing to fulfill orders for their existing Covid-19 vaccines — and some, including Johnson & Johnson and AstraZeneca, are struggling with major production setbacks. Pumping out second-generation shots would require factories to switch over manufacturing lines now used for the first wave of vaccines, and in some cases fire up new production processes.

The potential manufacturing gap is the latest challenge to President Joe Biden’s promise to bring the pandemic to a close. South Africa has already rejected AstraZeneca’s vaccine because an early trial showed it wasn’t effective against the B.1.351 strain that dominates there and has now reached the United States. Another variant spreading in America — P.1, first found in Brazil — has raised similar concerns about its ability to evade some of the vaccines now in use globally. Biden administration officials are working overtime to understand how the variants’ spread could alter vaccination strategies. But the lack of manufacturing capacity is limiting America’s options.

For vaccine makers, it’s not clear when or how to begin prioritizing production of the revised shots, said Stephen Ostroff, who spent more than 20 years working at the Centers for Disease Control and Prevention and the Food and Drug Administration. “The question is who, and how, do you make the decision to pull the trigger?”

Preliminary data on the vaccines now available in the United States, from Pfizer, Moderna and Johnson & Johnson, suggest they can ward off the most worrisome known variants, although the shots are more effective against earlier forms of the virus. There is still a chance that an additional dose of those existing vaccines could provide all the protection against variants that people need.

Still, companies caught up in the vaccine race are studying updates to their regimens including booster shots, revised vaccines that target specific variants or a mix of the two.

Moderna, Pfizer and AstraZeneca are among the vaccine makers already testing variant-focused options in clinical trials, with early results expected within two to three months. And the U.S. government is encouraging AstraZeneca, Sanofi and other manufacturers lagging in the vaccine race to concentrate on modifying their original shots to tackle variants, said two senior administration officials.

“Obviously we have the capability of buying, if we need to, boosts with either wild type or variants,” said a third official, referring to the original “wild type” virus used in the first wave of vaccines.

Top Biden staffers communicate often with U.K. officials, where there is a solid grasp on variant spread, said two senior American officials. Health officials also have regular meetings with counterparts in other countries that include discussions of variants and possible strategies to fight them, said one U.S. official and a person familiar with the talks.

The White House did not respond to a request for comment.

Federal officials and outside vaccine experts say that Pfizer and Moderna shots are easy to modify and manufacture on a large scale, because the mRNA technology they use means very few changes need to be made to the original vaccine before plugging the formula back into the same manufacturing system.

But despite the U.S. government’s early conversations with AstraZeneca and Sanofi, it’s unlikely that either of those companies will be among the first to start manufacturing shots aimed at variants if the need arises this year.

AstraZeneca’s original shot, in wide use globally but not yet available in the U.S., is mired in manufacturing challenges and safety concerns. The company is severing ties with a contract manufacturer, Emergent BioSolutions, at the government’s request after Emergent mixed ingredients from AstraZeneca and Johnson & Johnson’s vaccines. (The contractor will now focus on Johnson & Johnson’s shot, already in use in the U.S.)

AstraZeneca has not yet sought permission from the Food and Drug Administration to market its vaccine in the U.S. There are mounting questions about what authorization could look like given persistent concerns in Europe about rare blood clots linked to the vaccine, which have prompted several countries to restrict use of the shot to people 55 years and older.

It’s possible that FDA could follow suit and limit AstraZeneca’s use to older people — already the country’s most-vaccinated population — citing data out of Europe. If the British manufacturer wanted to produce a revised vaccine, it is unclear how long it could take and if Americans will want the shot.

“Regarding boosters, at this stage we are unable to say if or when booster vaccinations will be required. Clinical trials are ongoing and more data will be accrued to better understand durability of response,” an AstraZeneca spokesperson said.

Johnson & Johnson is studying whether two doses of its vaccine outperform the single dose that is now standard, but it has not tried to revise its formula. Moderna began a clinical trial of a booster shot and a modified vaccine with the National Institutes of Health in late March. Pfizer and its partner BioNTech started a booster trial with their original vaccine in February and said they are in talks with regulators about a variant-specific shot.

With these shots still in the lab or early human trials, health officials and pharmaceutical companies say it is too early to think about producing them on a broad scale. But the possibility is on peoples’ minds, especially as the B.1.351 and P.1 variants spread in the U.S. and other countries. Both are more contagious than earlier versions of the virus, and B.1.351 is deadlier.

Several vaccine makers supplying the U.S. have made recent efforts to expand their manufacturing capacity, some with government assistance. The Biden administration used the Defense Production Act to secure some Pfizer supplies and claimed credit for engineering Johnson & Johnson’s deal with Merck for vaccine-production help later this year. Moderna this week announced a long-term deal with a contract manufacturer.

“The question is how much of this do the companies do at their own risk versus how much does the government support?” said Nicole Lurie, who led the Department of Health and Human Services’ emergency preparedness efforts during the Obama presidency. Lurie is now a strategic advisor at the Coalition for Epidemic Preparedness Initiatives, one of the organizations leading the global vaccine equity effort known as the COVAX Facility.

U.S. authorities have already doled out billions of dollars to secure hundreds of millions of doses of the first vaccines from Pfizer, Moderna, J&J, AstraZeneca and Novavax. These manufacturers have promised a combined 700 million doses to the U.S. this year — a gargantuan task that nevertheless they promise they can largely accomplish by this summer.

From then, the road forward gets hazy. Scientists still do not know how long protection from vaccines lasts and whether certain strains can overcome any immune protection from the initial vaccines. Booster shots could become a regular occurrence. And each of these manufacturers will need to continue producing initial doses in addition to any boosters.

“The good news is that the existing vaccines generate neutralizing antibodies that work against the variants,” said a senior administration official. “We need more data to determine the durability of that response. It’s likely — it’s anticipated — that that response will wane over time.”

The official added that there are three possible ways forward: Boost immunity with another dose of existing vaccines, boost with a vaccine aimed at variants, or combine those into what’s known as a bivalent vaccine.

Biden officials are betting on vaccinating the vast majority of Americans before variants spread so widely in the United States that new shots are needed — but that ship has sailed in other countries, such as South Africa, that are scrambling for shots that protect against variants like B.1.351 and P.1.

“I think that as soon there’s a variant vaccine that’s made it through the appropriate trials, it may be prudent just to switch over to that vaccine, certainly in countries where the variant is prevalent,” said Lurie.

All this could pose one of the biggest tests of vaccine diplomacy for U.S. officials. While the Trump administration largely bucked global cooperation on Covid-19, adopting an ‘America First’ approach to securing vaccines, the Biden team has made early moves to rejoin the international fray, returning to the World Health Organization and becoming a participant in the COVAX Facility vaccine equity effort.

But there is a careful balance for Biden to strike between racing to protect Americans in a matter of weeks, as promised, and pitching into the global effort to defeat the virus before variants become the world’s biggest problem.

“I’m talking to you all about how we have even access to more vaccines than we need to take care of every American. And we’re helping other poor countries — countries around the world that don’t have the money, the time, the expertise,” Biden said in an April 6 speech celebrating that 150 million shots had been administered in the U.S. “Because until this vaccine is available to the world and we’re beating back the vaccine — the virus in other countries, we’re not really completely safe.”

‘No action on anything’: Australia increasingly isolated as US and others ramp up climate ambition