The End Of The Pussy-Grabbing President

Four years ago, hundreds of thousands of mainly female protesters peacefully descended on Washington, DC, to register their opposition to the president of the United States. They wore pink “pussy” hats. They carried signs with slogans like “Pussy Grabs Back.”

Last Wednesday, another angry group arrived in DC, egged on by that same president.

Earlier that day, the vice president had received a phone call from President Donald Trump. According to The New York Times, the president had called to forcefully push Pence to overturn the results of a democratic election. During that January 6 phone call, Trump reportedly set up a binary choice for his deputy. “You can either go down in history as a patriot,” Trump told him, according to the Times’ report, “or you can go down in history as a pussy.”

A perfect bookend to the Trump era; a four-year presidency largely defined by its fealty to a very specific conception of masculinity.

Trump has a few easily identifiable core values, and misogyny is unquestionably one of them. Indeed, it is a defining theme of his four years in the White House. But perhaps even stronger than his disdain for and disrespect toward women is the president’s obsession with projecting a toxic brand of “manliness.”

When his first presidential campaign began, he vowed to “Make America Great Again,” a campaign slogan which, on its own, might appear to be gender-neutral, but was always imbued with racist, misogynist subtext and a profound anxiety about the changing cultural conceptions of race and gender.

“What MAGA is really saying is put white men back on centre stage,” said educator and filmmaker Jackson Katz, whose most recent film project, “﻿The Man Card,” explores white male identity politics. “A huge part of the explanation of Trump as an individual and Trumpism as a movement is about white masculinity.”

In the worldview of the president and his most fervent followers, any conception of the United States that does not centre white men is akin to the destruction of the nation.

Trump’s particular brand of white masculinity has always hinged on the idea that being a Real Man means imposing your will on others through brute force. And in the worldview of the president and his most fervent followers, any equal distribution of power, any conception of the United States that does not centre white men, is akin to the destruction of the nation.

“The rally was called Save America!” for a reason, said Katz, referring to the gathering of Trump supporters the president addressed and urged to storm the Capitol. Katz explained that “saving” America, to them, is saving it from women and people of colour and this wave of diversity and progressive culture. “This is in line with right-wing theory and ideology: As white men’s power has been diminishing, the country has been going to hell.” Over the course of his nearly hour-long speech, the president repeatedly emphasised the need for a particular kind of “strength.”

“You’ll never take back our country with weakness,” Trump told the angry people in the crowd, many of whom were armed with weapons, ready to inflict harm on perceived enemies. “You have to show strength, and you have to be strong… We fight like hell, and if you don’t fight like hell, you’re not going to have a country anymore.”

On the one hand, Trump calling Pence a pussy is just the president employing a classic sexist put-down, the grown-up equivalent of a young boy bullying another boy on the playground by telling him that he “throws like a girl.”

“If you want to insult a man in America, that’s what you do,” said Soraya Chemaly, the author of “Rage Becomes Her” and executive director of The Representation Project. “The worst thing you can do is to compare him to a woman,” she said.

Trumpism’s obsession with retrograde masculinity didn’t spring up in a vacuum, but rather, Katz said, out of decades of Republicans subtly and explicitly “framing their party as the masculine party, and feminising the Democrats ― and especially men who are progressive and feminist ― as soft and wimpy and weak. And they have successfully manipulated millions of white men to support their politics in part through that identification.”

Portraying himself as a super-macho saviour is core to Trump’s message, much as masculinity has been core to the types of dictators the president admires, said Ruth Ben-Ghiat, a history professor at New York University. She points to the infamous remark Trump made before becoming president when he claimed he could shoot someone in the middle of the street and face no consequences.

“He was saying he’s capable of violence and above the law,” she said. “It endeared him to his fans as a certain kind of powerful man.”

In her recent book, “Strongmen,” Ben-Ghiat likens Trump to dictators like Benito Mussolini and Vladimir Putin, who both projected themselves as macho heroes. She points to the many images of Putin with his shirt off as a way of him showcasing his virility and masculinity.

Trump hasn’t been seen without a shirt in a long time, so his fans notoriously photoshopped his head onto other, fitter men’s bodies.

Seen through this lens, it begins to make more sense why the “Access Hollywood” tape didn’t sink Trump’s presidential campaign. Bragging about grabbing women by the pussies only enhanced his appeal, Ben-Ghiat said. Trump was already known for putting women “in their place,” by lobbing insults at them. Now, with this tape, the world understood he wasn’t above sexual assault, either.

“He couldn’t have been a more fitting misogynist warrior,” she said.

In the end, of course, the hyper-macho pussy-grabber didn’t get reelected. Soon there will be a woman replacing ‘pussy’ Mike Pence.

A misogynist in chief, fighting back against the perceived threat of a world populated by increasingly powerful women ― like Hillary Clinton or Nancy Pelosi ― was incredibly appealing to the aggrieved white men we saw Wednesday rampaging through the Capitol.

The image of Richard Barnett sitting at a desk in Nancy Pelosi’s office with his feet up makes perfect sense ― that’s a guy showing a woman who’s really in charge. Elevating his masculinity by taking down a powerful woman.

“Every time I look at that picture, it makes me sick,” Ben-Ghiat said. 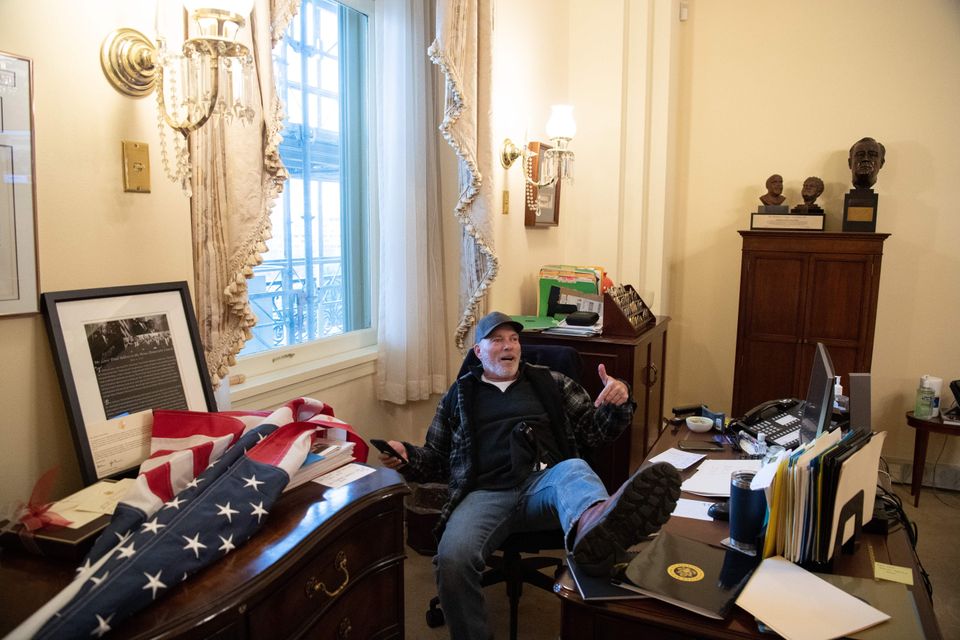 Another man, 36-year-old Adam Johnson, stole Pelosi’s lectern – in other words, an attempt to silence her. Both Barnett and Johnson have since been arrested.

What we saw Wednesday was sort of like Toxic Masculinity’s last stand; a reassertion of male power, said Chemaly. “A reassertion of the entitlement to violence, to power, to being outside of the rules.”

Where American masculinity goes from here remains an open question. But as far as Katz is concerned, the only way forward is to move away from the “cartoonish and embarrassing” Trumpian conception of strength toward a strength that includes “speak[ing] up and support[ing] American ideals of justice, freedom, and equal justice under the law.”

“These are ideals that require lessening white male centrality,” said Katz, “but that men can play a really powerful role in advancing. If you’re a strong enough man and you’re committed to those ideals, you won’t be threatened by those changes.”

In the end, of course, the hyper-macho pussy-grabber didn’t get reelected. Soon there will be a woman replacing “pussy” Mike Pence.

“Donald Trump did the opposite of coming full circle,” said Jennifer Lawless, a political science professor at the University of Virginia. “He was an insecure businessman who made himself feel powerful by demeaning women. He was an insecure president who claimed victory every time he chipped away at diversity, inclusion, and equity. And he’s an insecure soon-to-be former president whose remarks make it clear that he believes women are too weak to be patriots.”