The Epic court battle that could upend Apple’s future 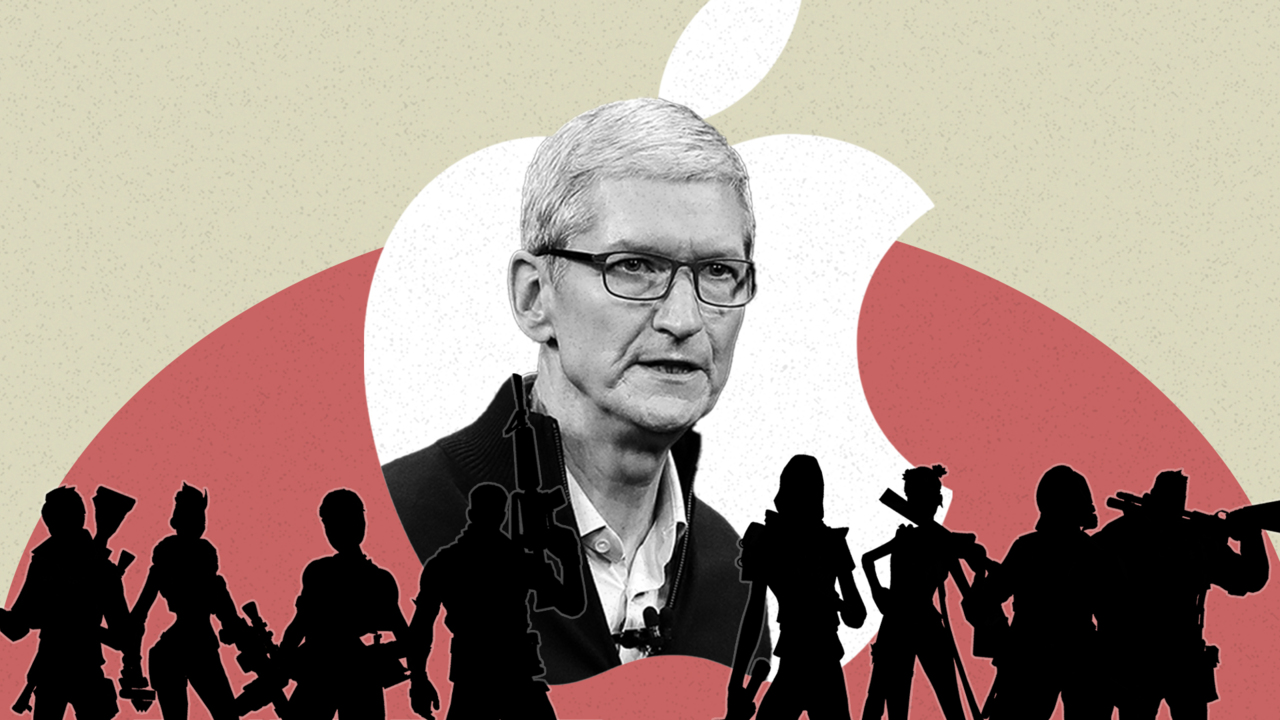 Apple is about to face off in court against the biggest threat to its $2 trillion tech empire — not the governments of the U.S. or Europe, but a video game company based in the town of Cary, N.C.

Epic Games, the maker of the popular video game Fortnite, has captured the attention of regulators in Washington and Brussels with an antitrust lawsuit that could upend how the iPhone-maker does business. The federal civil trial starting Monday in Oakland, Calif., focuses on Apple’s control over its App Store — the only way app developers can reach the world’s 1.5 billion iPhone or iPad users.

The trial begins three days after the European Commission charged Apple with abusing its control of the App Store to harm rival music streaming services. But Epic’s case is the first case to reach a courtroom.

Epic argues that Apple has illegally tied access to the store to the use of its payment system, which takes a 30 percent commission out of most sales. The game developer has also challenged Apple’s refusal to allow the Epic Game Store, which sells hundreds of games, onto iPhones and iPads.

The Epic case has resonated with broader concerns about how mammoth tech players like Apple, Google and Facebook have come to dominate the internet, positioning themselves as gatekeepers in what was once an open ecosystem.

“If Epic is able to score a victory, then that will also majorly liberate the internet economy,” said Andy Yen, CEO of Protonmail, an email app that has tangled with Apple over its App Store rules and is backing Epic. “It will make it possible for a lot more companies to innovate and grow in the space. You’re basically taking the entire mobile space and making it competitive again.”

Fallout from Epic’s case has already made its way to Congress, where senators cited filings from the case during a hearing in April about the antitrust implications of app stores — especially Apple’s store and the one that Google oversees for Android phones and tablets. Justice Department antitrust prosecutors, who have been probing Apple since 2019, are also a likely audience for any big revelations from the civil trial.

“Apple and Google operate as gatekeepers with the power to decide how or whether apps can reach iPhone and Android users,” Senate antitrust subcommittee Chair Amy Klobuchar (D-Minn.) said at the April 21 hearing. “I’m concerned that these commissions can be used to suppress competition.”

A loss would be a major blow for Apple, which relies on its App Store for roughly $500 billion a year in sales — and a rising share of its profits. But ordinary consumers would also notice the difference, said John Newman, an antitrust professor at the University of Miami Law School.

Users tend to view PC and Mac computers as “a blank canvas” onto which they can download anything they want, but Apple and Google exert much tighter control over what apps consumers can install on iPhones or Android phones, Newman said. (Google, which exerts less total control over Android apps than Apple does in its realm, is fighting a separate suit that Epic filed last year.)

Epic’s lawsuit “targets the ability to put your own app store on the App Store. That would be a fundamental change to Apple’s business model,” said Newman, who worked at the Justice Department’s antitrust division before moving to academia. “If Apple is forced to allow competing app distributors … you think a little less ‘I take what Apple gives me’ and more ‘I can make this phone what I want it to be.’”

A legal victory for Epic, though, is far from certain. Early in the case, U.S. District Judge Yvonne Gonzalez Rogers ruled that Apple could kick Fortnite out of the App Store while the suit was pending and said Epic’s claims raise “questions at the frontier edges of antitrust law.”

For its defense, Apple plans to roll out the big guns, calling CEO Tim Cook to testify along with other top Apple executives who helped build the App Store from a Steve Jobs idea to the behemoth it is today. Epic, meanwhile, will offer testimony from its CEO, Tim Sweeney, along with executives from Microsoft, Nvidia and Tinder owner Match Group to contend that Apple has no justifications for the limits it places on developers.

Apple plans to argue that its App Store has given a platform to millions of developers and that its 30 percent commission is on par with what Google, Amazon and Microsoft charge in their own app stores. About 83 percent of developers in Apple’s store offer their apps for free and pay only the $99 fee charged to everyone for access, the company says. Developers with less than $1 million in sales pay 15 percent.

Apple also argued that its strict app review process improves the privacy and security of the iPhone and iPad, preventing users from having to deal with malware and other cybersecurity threats.

Both sides have enlisted high-powered economic and cybersecurity experts to argue on their behalf in what is expected to be a three-week bench trial before Gonzalez Rogers. The judge is expected to issue a ruling later this year.

Filings in the case have already generated some embarrassing revelations for Apple — such as sworn testimony from Phillip Shoemaker, its former director of App Store review, where he said the company “used the App Store ‘as a weapon against competitors’ and ‘has rejected or delayed competing apps on pretextual grounds.’” Utah Sen. Mike Lee, the top Republican on the Senate Judiciary antitrust panel, quoted from that document during the April hearing while asking Apple about its policies.

“How can competitors and customers and legislators and others be sure that security and privacy aren’t being used as a pretext to exclude competition as alleged by Mr. Shoemaker?” Lee asked Apple’s representative.

DOJ prosecutors are likely to tune in to the trial to mine any tidbits for their investigation, Newman said. Still, he said it isn’t unusual for the department to decide not to bring its own suit if “a serious, well-funded case” from someone else is already in the works.

“The Justice Department has scarce enforcement resources and if there’s already a well-funded plaintiff, they really do think about that,” he said. “They take into account they are not the only cop on the beat.”

Across the Atlantic, the European Commission is pursuing its own probes into Apple and is “certainly interested in the outcome” of Epic’s case, said Anu Bradford, an expert on comparative antitrust and EU regulation at Columbia Law School.

On Friday, the European Commission charged Apple with violating EU competition law, saying the company has “abused its dominant position for the distribution of music streaming apps through its App Store” — a case that originated with a complaint from streaming rival Spotify. Apple will now have an opportunity to respond, which could lead to settlement negotiations or the commission pushing ahead with a fine and an order forcing Apple to change its practices.

“The commission will be watching the U.S. case with keen interest but it is prepared to carve its own path,” said Bradford, who practiced in Brussels before moving to the United States. “The interesting thing to watch is whether the U.S. agencies’ more interventionist shift against Big Tech will be embraced by the judiciary.”

That Apple’s most serious challenge comes from a video game company isn’t as surprising as it sounds.

About 2.6 billion consumers play games online, a number that is expected to grow to more than 3 billion by 2023.

And much of that growth comes from smartphones and tablets, which have dramatically expanded the reach of the gaming industry. About 64 percent of U.S. adults and 70 percent of kids play video games — and the most commonly used device is the smartphone, according to the trade group Entertainment Software Association.

Apple has benefited substantially from that. In 2019, the App Store facilitated $500 billion in sales. While the iPhone still remains Apple’s cash cow, devices have slowly declined in importance to the company’s bottom line as consumers keep their phones longer. Two year ago, financial analysts with Piper Jaffray estimated that Apple’s services business — which brought in about $50 billion in 2019 from subscriptions and sales in its App Store — is now worth more than the iPhone.

One of the largest contributors to that is games, where the company takes a 30 percent commission on sales and in-app purchases like virtual currencies.

Technology news from Washington and Silicon Valley — weekday mornings, in your inbox.

In court filings related to the Epic suit, Apple said it brought in $13.2 billion in revenue from App Store transactions in 2018 — with $8.3 billion, or nearly 62 percent of that, from games.

Fortnite took Epic nearly six years to build, debuting in 2017, and incorporates two popular genres of games: first-person shooters, like Halo, Call of Duty and Doom where players use guns to pick off opponents, and world-builders like Microsoft’s Minecraft.

Players can compete against one another, play on teams to complete missions or build their own structures and games within the game. Fortnite has 400 million registered users and is free, though players can buy in-game currency, known as V-Bucks, to purchase character upgrades, gear or in-game dance moves called emotes.

The game can be played on game consoles including Sony’s PlayStation, Microsoft’s Xbox and Nintendo Switch, along with Windows PCs, Apple’s Macs and Android smartphones and tablets. It was also available on iPhones and iPads until Apple removed it from the App Store in August 2020 after Epic tried to introduce its own payment system for V-Bucks.

Epic spent months developing a plan to take on Apple, internally code-named Project Liberty, that grew to involve more than 100 of the company’s employees. The company hired a public relations firm and the law firm Cravath, Swaine & Moore, home to Christine Varney, President Barack Obama’s first DOJ antitrust chief, and Katherine Forrest, a top antitrust litigator who spent seven years as a federal judge. Epic also helped found the Coalition for App Fairness to advocate on behalf of developers, a group that now has 45 members including Spotify, Tile and Match.

It’s not just smartphones at stake. One reason Epic’s Sweeney has given for engaging in this fight with Apple is concern about future technologies. In a November interview with the New York Times, Sweeney said his first computer was an Apple II Plus — a model that debuted in 1979 and allowed a wide array of third-party add-ons. He said he hopes the industry will move back to the “completely open” ecosystem of early personal computing.

“The power of these ecosystem operators, whether it’s Apple and Google, or social media companies … you can either have a utopia of communities online or a dystopia where powerful corporations use their control over the medium to exert more and more control and influence over society,” he said.