Trump has been impeached. What happens now?

Donald Trump made history on Wednesday as he became the only United States president to be impeached twice.

The US House of Representatives impeached Trump for “incitement of insurrection” after a mob of his supporters stormed the Capitol on January 6 as Congress met to certify President-elect Joe Biden’s election victory.

The Republican leader’s political fate is now in the hands of the US Senate, which will hold an impeachment trial to determine whether Trump should be convicted.

The major outstanding question, however, is when that trial will take place.

The Democrat-controlled House is expected to send the approved article of impeachment to the Senate soon. Once there, it will become that chamber’s top priority.

“It will be an action that is privileged on top of all other actions,” Al Jazeera’s Steve Clemons noted on Wednesday. “The Senate, once it reconvenes, will have no choice but to take up the trial of President Trump – and maybe even after he is no longer president.”

The Senate is in recess until January 19, the day before Biden will be sworn in as the country’s next president.

Senate Majority Leader Mitch McConnell’s office said on Wednesday that he rejected a request from Senate Minority Leader Chuck Schumer to treat the impeachment trial as an emergency and reconvene the Senate immediately.

Trump insisted on Tuesday that the speech he gave prior to the Capitol siege, which the House cited in its impeachment article, was ‘totally appropriate’ [Carlos Barria/Reuters]In a statement after the House vote, McConnell said the Senate would not take action until after Biden is sworn in.

“Even if the Senate process were to begin this week and move promptly, no final verdict would be reached until after President Trump had left office. This is not a decision I am making; it is a fact,” he said.

Therefore, it appears likely that a Senate trial will take place after Trump leaves office – something that also has never happened before.

Some experts have argued that the Senate is unable to hold a trial after Trump’s term ends.

“The Senate’s only power under the Constitution is to convict – or not – an incumbent president,” former US Court of Appeals judge J Michael Luttig recently wrote in the Washington Post.

“My understanding is that, so long as the process is initiated while someone is still in office, it can continue to a conclusion, even if that person leaves office,” Thomas M Keck, a professor of political science at Syracuse University, recently told Al Jazeera. 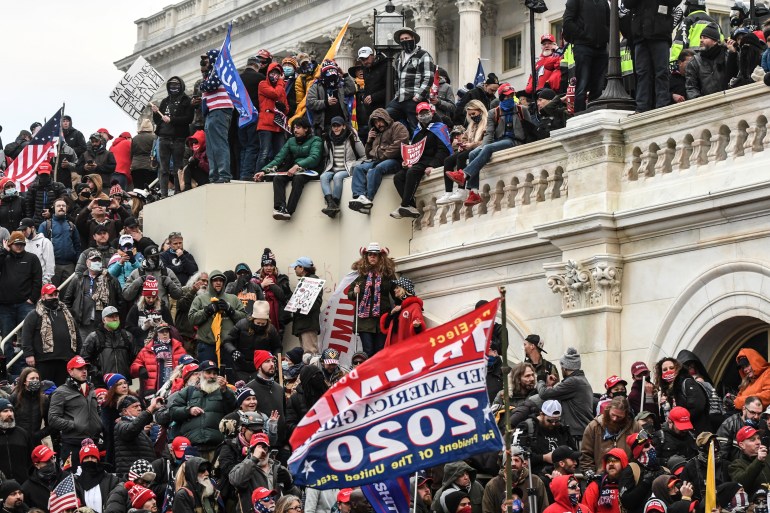 Supporters of US President Donald Trump gather at the Capitol during a ‘Stop the Steal’ protest before the riot on January 6 [Stephanie Keith/Reuters]If the Senate proceeds with a trial after Trump has left the White House, Trump could sue to block the trial, claiming it violates the constitution. That would delay or potentially quash the effort.

The Senate needs a two-thirds majority – 67 out of 100 senators – to find Trump guilty.

It could then hold a subsequent vote requiring a simple majority – 51 senators – to bar Trump from holding office in the future.

Al Jazeera’s Alan Fisher, reporting from the White House on Wednesday, said Democrats could delay taking up the impeachment trial in the Senate until Biden’s incoming administration has had 100 days in office.

That would aim “to allow Joe Biden first of all to push forward with his agenda, but also more crucially to get his cabinet confirmed”, Fisher said.

“They have got to be confirmed by the Senate, and that includes all the key positions like Secretary of State, head of the CIA, head of defence.”

What does this all mean for Trump’s political future? That is still up in the air.

Democrats and some Republicans would like to see him out of office immediately.

That could happen either through resignation – as Richard Nixon did in 1974 when it became clear he would not survive an impeachment trial in the Senate – or by the Senate vote to remove him from office.

“I think the best way for our country is for the president to resign and go away as soon as possible,” Republican Senator Pat Toomey said on Sunday in an interview with NBC News.

All indications are that Trump will not step down before January 20, however.

Speaking to reporters for the first time since the riot, he insisted on Tuesday that the speech he gave prior to the Capitol siege, which the House cited in its impeachment article, was “totally appropriate”.

“He is never conciliatory, he never apologises and I think he very much intends to stay in the political limelight, to retain control over the Republican Party as much as possible,” Zeller told Al Jazeera. “I do not think he will resign.”

Barring resignation, Trump’s political future would hinge on what the Senate decides.

It is unclear if enough Senate Republicans would vote to find Trump guilty for the Senate, which will have a slim Democratic majority after Biden is inaugurated, to meet the two-thirds support required.

But if a movement arises among the GOP to prevent Trump from running for president in 2024, his long-term political future may be forced to the sidelines.