Turning up the spotlight: how our climate coverage has made a difference

“Will this story make a difference?”

It’s a question journalists ask themselves all the time. The answer is rarely clearcut, and there is no shortage of stories that barely make a ripple. But there have been a number of occasions in recent years on the Guardian’s environment desk when the answer has been a resounding yes.

The media is part of a social nervous system, alerting the public to remote danger in the same way neurotransmitters tell the brain the tips of the fingers are being burned. We serve as amplifiers that enable weak or remote voices to reach a wide audience and centres of decision making. And, of course, we also have a role as watchdogs, holding political authority to account.

These roles – of transmission, amplification and investigation – are all vital elements in any effective response to the world’s environmental breakdown.

The Earth is an extraordinary piece of evolutionary engineering that has self-regulated itself for millions of years. That homeostasis is now being destabilised by human activities. Scientists tell us it is not too late to fix this, but we need to start the repair work urgently. Journalists can facilitate that.

That is because we can connect the local and the global, which is an essential part of any solution. The climate crisis, collapse of natural life support systems, rise of zoonotic diseases and the pollution of air, water and soil are often first apparent in distant regions and poor communities, though the cause and ultimate consequences can be found in wealthier and more densely populated cities. As we have learned with Covid-19, unless problems are identified and dealt with early and at a local level, the health and economic costs can be horrendous as they later spread and expand across the world.

The Guardian makes those connections because it has an internationalist and social perspective and is not owned by a tycoon or corporate interests. This independence sets it apart from most other media organisations, which have a narrower domestic and economic focus, or see their role as entertainers to distract readers, or echo-chambers that reinforce prejudices. Instead of putting distance between the UK and the rest of the world, we are more likely to explore what links us together, which is essential if we are going to address global environmental problems.

Lorries exiting the Fenix nickel mine in Guatemala. Photograph: Guardian

Finding out how people are affected and fighting back at a local level was a goal of the
Green Blood series on the threats posed to environmental activists and journalists who cover the mining sector. This has made a difference. Soon after the findings were published by the Guardian and its 35 partner media organisations, Guatemala’s constitutional court upheld a request from indigenous campaigners to suspend operations at one of the largest nickel mines in Central America due to the facility’s environmental impact.

Similarly, reports of human rights abuses and environmental negligence at the North Mara goldmine in Tanzania prompted multinational corporations such as Apple, Nokia and Canon to review their supply chains. The refiner, MMTC-PAMP, and the mine’s owner, Barrick, have subsequently organised an inquiry into risk management practices at North Mara. The Guardian continues to scrutinise the operator’s promise to pay more heed to the concerns of the local community and environment.

Similarly, the Defenders series on the killings of environmental and land activists continues to have ramifications. In the past two years, two of those profiled have won landmark lawsuits. In South Africa, courts ruled against a proposed titanium mine that would have torn up land belonging to the Xolobeni community on the Wild Coast. In Kenya, judges awarded $12m in damages to the residents of the Owino Uhuru shantytown for deaths and health impacts from a nearby lead smelter for recycling batteries. 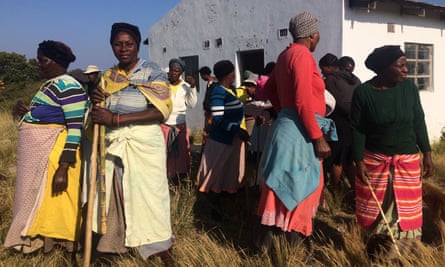 In both cases, local activists risked their lives to campaign against powerful economic interests because they were concerned about pollution and other forms of environmental degradation. Media coverage did not decide their cases. But without the international spotlight, their courage and determination would not have received the kind of prominence that can sway opinion.

A recent case in point concerned Chinese mining company plans to explore coal deposits in Zimbabwe’s Hwange national park. Local conservationists were keen to get the message out internationally because domestic reports suggested the government was ready to put economic interests above the sanctity of one of the world’s most important homes for elephants, rhinos, cheetahs, giraffes and other wildlife. It worked. Days after stories were published in the Guardian and other media, the authorities announced they would block the plan.

Similarly, in Brazil, the world’s biggest meat packing company, JBS, announced in September it would axe suppliers linked to Amazon deforestation. This policy was a turnaround from its previous stance and followed a series of articles by the Guardian in collaboration with Repórter Brasil about the company’s lax oversight of its supply chain.

Of course, many other factors are involved in such decisions. Measuring the influence of a story is far harder than counting page views and social media shares. But it is clearly important or corporations and governments would not spend billions on public relations campaigns to avoid negative publicity. In that vein, the Guardian has taken several major steps to try to shape public opinion in favour of greater action on the climate crisis.

The biggest environment reporting project of recent years was the Polluters, an old-school piece of investigative journalism that aimed to name and shame the fossil fuel companies, financial companies, public relations firms, thinktanks and politicians that have contributed the most to the climate crisis. This was a cross-disciplinary collaboration of more than 20 journalists across environment, business, investigations, data journalism, video, podcast, graphics and foreign news desks in five countries, with support from universities and NGOs.

After eight months of preparation, the newspaper and website led with hard-hitting exposes every day for a week. This intense focus demonstrated the importance the Guardian places on a topic of growing public concern. It generated debate across the political spectrum and within the boardrooms of some of the world’s biggest companies, and it contributed – along with the upsurge in climate activism – to a growing number of announcements by the likes of BP, Shell and several banks and insurance companies to accelerate the shift away from carbon-intensive industries.

We also know we can and should do more. As Greta Thunberg and others have pointed out, the climate and nature crises are so pressing they should be the subjects of the top headline on every news website and TV channel. There are still countless untold and under-reported stories. Scientists tell us the world needs to accelerate an energy, transport and food system transformation on a scale unprecedented in history. That is both alarming and exciting.

Business as usual is not enough. Nor is journalism as usual.