The U.S. is likely to hold off sanctioning any German entities for now over the Nord Stream 2 gas pipeline from Russia, according to four people familiar with the matter, as the Biden administration seeks to halt the project without antagonizing a close European ally.

A key report to Congress that was due last Tuesday could be out as soon as Friday, and it’s expected to list only a small number of Russia-linked entities, according to the people, who asked not to be identified because the policy hasn’t been announced.

Nord Stream 2 emerged as a major source of friction in trans-Atlantic relations during President Donald Trump’s administration as the project, which would bring Russian gas into the heart of Europe, neared completion. Trump officials, in arguments essentially supported by President Joe Biden’s administration, said the project undermines European security by tying the continent more closely to Moscow.

The Gazprom PJSC Slavyanskaya compressor station, the starting point of the Nord Stream 2 gas pipeline, in Ust-Luga, Russia. Nord Stream 2 is a 1,230-kilometer (764-mile) gas pipeline that will double the capacity of the existing undersea route from Russian fields to Europe – the original Nord Stream – which opened in 2011. [File: Andrey Rudakov/Bloomberg]The people familiar with the issue said Secretary of State Antony Blinken is loathe to target companies or individuals from nations like Germany, arguing that it’s more important to find a diplomatic solution and heal rifts created by Trump’s “America First” approach to foreign policy.

That reticence is sparking an outcry among critics who argue that U.S. law requires sanctions against any foreign entity if it assisted in construction of the pipeline. They also say that while the U.S. may be seeking to ease strains with Germany, it risks alienating other allies such as Ukraine, Poland and the Baltic states.

After just one month in office, debate over the pipeline is forcing the Biden administration to navigate between seeking to keep pressure on Russia and building closer ties with Germany, a NATO ally. Time is running out on the Americans, with the pipeline nearly finished.

Two people familiar with the matter said that while the Trump administration had also shied away from sanctioning German entities, it was preparing such action in its final weeks. Among potential targets was Matthias Warnig, the German chief executive officer of Nord Stream 2 and former East German Stasi agent who has known Russian President Vladimir Putin personally since at least 1991, the people said.

The people said Trump’s National Security Council had developed a detailed plan with a goal of ultimately halting the project, and the only reason sanctions against German entities never happened was that they ran out of time.

Two other people familiar with the matter argued that the Trump administration’s plans lacked specificity and never got past the discussion stage. 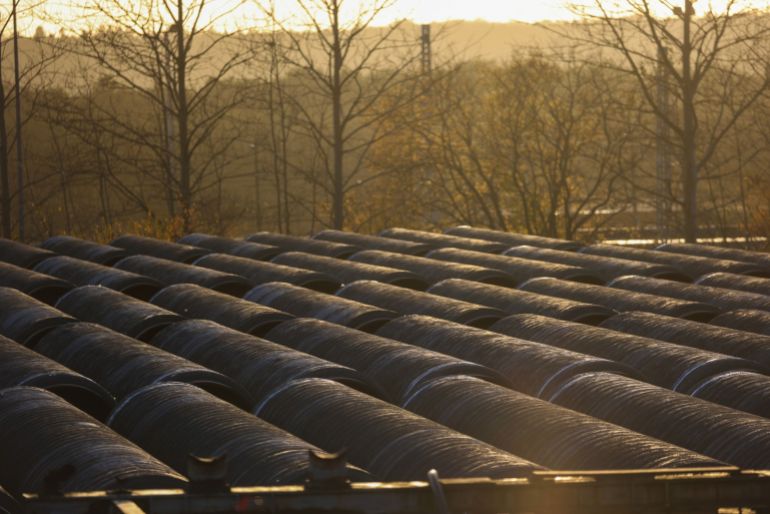 Sections of Nord Stream 2 pipes at the Baltic port of Mukran on the island of Ruegen in Sassnitz, Germany [File: Alex Kraus/Bloomberg]“To sanction a big project by threatening German and other European targets burns up a lot of political capital,” said Daniel Fried, a former ambassador, assistant secretary and State Department sanctions coordinator under Democratic and Republican administrations. “They didn’t create this problem. They didn’t screw this up. But they’re trying to fix something in a way that takes everybody’s interests into account and it’s not easy.”

The debate over Nord Stream 2 has been thrust onto the administration in its early days because of a congressional requirement to submit a report by Feb. 16 — a deadline that has been missed — detailing entities linked to the pipeline that could be subject to sanctions.

The report is expected to list a small number of Russian entities that will likely face sanctions. Another set of entities will be seen as safe from the threat of sanctions because they’re unwinding their work with the project.

The big question is what happens next. Germany is still seeking to keep the project alive, and has revived proposals rejected by the Trump administration intended to allow gas to flow through the pipeline while limiting the leverage it would give Russia.

But doing so could create the impression that the U.S. is weak on Russia and caving in to its demands. It could also been seen as signaling that the U.S. is effectively abandoning other U.S. allies whose leaders oppose the pipeline and would risk backlash from Republican senators such as Ted Cruz of Texas, who has threatened to hold up State Department nominees on the issue.

“Senator Cruz expects that the Biden administration will meet its legal mandates to impose sanctions on any vessel, insurer, or certifier involved in any pipe-laying activities, in part because he knows that the State Department already has all of the information they need to impose those sanctions,’ said Cruz spokeswoman Jessica Skaggs. “He is prepared to use the full range of his Senate prerogatives to ensure they meet that requirement.”