What’s happening in the US presidential transition standoff?

President Donald Trump has continued to refuse to concede the presidential election to Democrat Joe Biden, as bipartisan calls have grown to allow a coordinated presidential transition between the incoming and outgoing administrations to begin in earnest.

In the meantime, Trump and his allies have launched a raft of long-shot legal challenges seeking to overturn results in several key states.

Biden, meanwhile, has officially launched his transition team, starting with a coronavirus task force, 39 transition advisory teams for the myriad agencies his administration will begin running once he takes office, and his White House staff. He has also begun to receive briefings from national security experts.

Still, the standoff from the Trump administration, which includes the president blocking his cabinet from coordinating with Biden’s transition team, has thrown the period between the November 3 election and the January 20 inauguration into uncertainty.

The transition period following the election normally functions on two levels, Bruce Jentleson, a Duke University professor and former Obama administration State Department official, told Al Jazeera: “One is affirmation, and the other is preparation”.

Supporters celebrate Joe Biden’s victory in the 2020 presidential election [File: Joshua Roberts/Reuters]Affirmation is the loser conceding the election, “the play by the rules, the handshake that normally happens as soon as the results are announced”, he said, adding. “Those norms have been already broken. Even if Trump concedes today, the damage is done.”

Preparation is the massive undertaking of replacing some 4,000 political appointees, 1,200 of which require Senate approval, in about 40 agencies in the president’s administration, while “trading binders, doing briefings, and having meetings” with mid-level staff to assure nothing falls through the cracks. Those agencies oversee everything – the federal coronavirus pandemic response, national security, social services, the economy and trade.

Biden has particularly highlighted the need to coordinate on the COVID-19 response amid promising developments in vaccine technologies, as he has increased pressure on Trump this week.

“More people may die if we don’t coordinate,” he said on Monday.

‘The way it has developed … is unprecedented’

The unusual standoff the country currently finds itself in is partially a product of its idiosyncratic election process, Karen Hult, a professor of political science at Virginia Tech and board member of the White House Transition Project, told Al Jazeera. Under that system, while victory is reliably projected by media organisations shortly after the election, the final results are not approved by Congress until just two weeks before the inauguration. That leaves a good deal of leeway for the sitting president.

Under the Presidential Transition Act, both candidates are required to have a “pre-election transition operation” that organises all relevant information and documents to be ready for a possible transfer of power, according to Hult.

But in the weeks between the presidential election and the inauguration, much is left up to a little-known agency called the General Services Administration (GSA). When the head of this agency, currently Trump-appointee Emily Murphy, “ascertains” the winner of the election, she unlocks further provisions in the Presidential Transition Act, including transition funding, access to agencies and the ability for incoming officials to pursue security clearances. 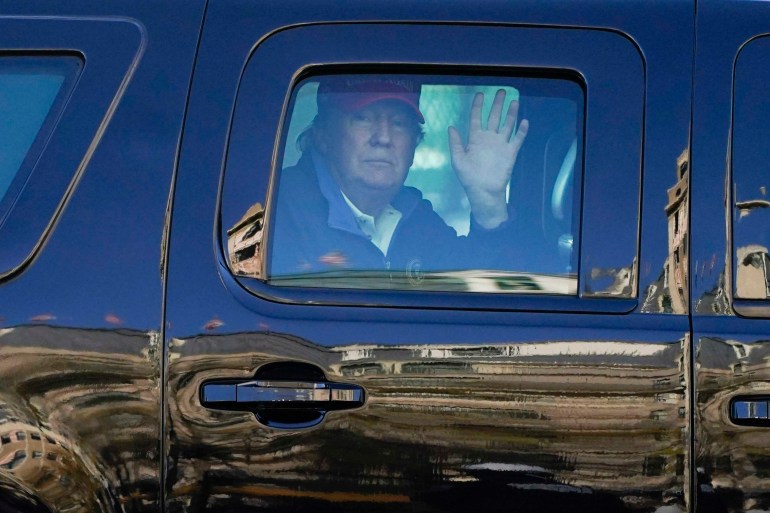 President Donald Trump has not made many public appearances since his election loss, although his motorcade greeted supporters during a march alleging voting fraud in Washington, DC [Julio Cortez/The Associated Press]“The GSA administrator has been given no clear criteria or metrics on which to base their decision of ascertainment,” Hult said. “Typically, what the GSA administrator has done is as long as it is clear that the votes have been counted, and even though there are recounts or court challenges, there’s virtually no likelihood that the outcome will be changed, they ascertain and move forward.”

If the head of the GSA does not ascertain Biden’s victory in the coming days, Hult said the “next decision point” would likely be December 14, when state electors vote, or January 6, when Congress approves that vote.

“The way it has developed since November 7 is unprecedented,” she added.

Republican Senators, former Trump officials, and even those still serving in the administration have increasingly called for Trump to move forward with a coordinated transition, with concerns particularly focusing on the coronavirus pandemic, as cases continue to surge to record levels in the US, and national security.

Tacit warnings have come from within Trump’s own coronavirus task force, with Dr Anthony Fauci telling NBC’s Today show he hoped to get the first vaccine doses out in December and to scale up in the first months of 2021.

“We want a smooth process for that,” Fauci said. “And the way you do that is by essentially having the two groups speak to each other and exchange information.” 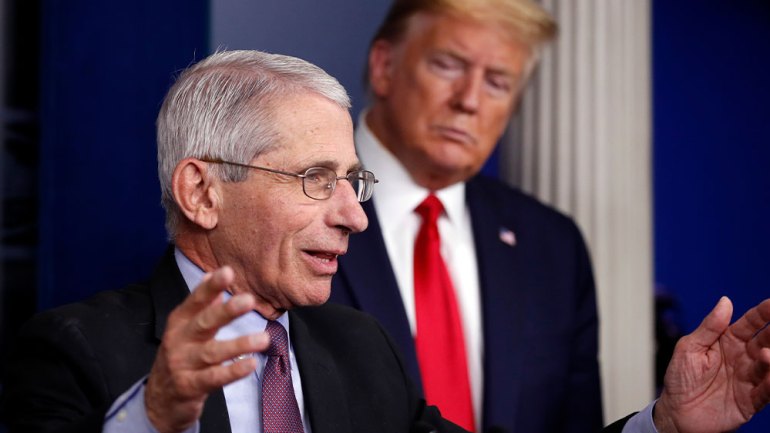 Dr Anthony Fauci has warned against the implications of a delayed coronavirus response [Alex Brandon/AP Photo]Meanwhile, Moncef Slaoui, who heads the Trump administration’s vaccine project Operation Warp Speed, told the Financial Times he hoped “nothing interferes” with the operation.

When asked if that meant coordinating with the Biden transition, he responded: “I would assume, yes.”

Others have stressed the need to share information on medication and testing supplies, personal protective equipment, ventilators, hospital bed capacity and workforce availability to be ready to respond to the pandemic on day one.

In a letter delivered to the White House on Tuesday, leaders of the American Hospital Association, American Medical Association and American Nurses Association called on the Trump administration to share that critical COVID-19 information “to save countless lives”.

“All information about the capacity of the Strategic National Stockpile, the assets from Operation Warp Speed, and plans for dissemination of therapeutics and vaccines needs to be shared as quickly as possible … so that there is no lapse in our ability to care for patients,” the letter said.

“Having a transition that begins right away, getting security clearance to the incoming team, giving the president-elect access to current intelligence – these are all part of the process of preparing, so that when a new administration comes in, they can hit the ground running and not have to figure out what the threats are and what the capabilities to respond are,” Chertoff, a Republican, said during a November 13 webinar at the University of Virginia.

Of particular concern is Biden not receiving the classified daily brief given to the president and vice president, as is the norm for a president-elect. On Wednesday, Senator Lindsey Graham, a close ally to Trump, urged the president to give intelligence briefings to Biden even as he continues to contest the election.

“Each day the Administrator delays is another day that the Biden team will be without critical information to prepare to combat the threats that the nation faces,” they wrote in the letter, which was first obtained by Politico.

Those officials, and other observers, have also highlighted that the official commission on the September 11, 2001 attacks on the US found that a 36-day delay in the presidential transition due to a recount in Florida had a ripple effect of a six-month delay in staffing the national security apparatus.

The report concluded that delay left the US more vulnerable, and said future transitions should “minimize as much as possible the disruption of national security policymaking”.

Qatar says it has identified the parents of a baby who was abandoned last month in a bin at Doha's airport. A woman from...
Read more

Qatar says it has identified the parents of a baby who was abandoned last month in a bin at Doha's airport. A woman from...
Read more